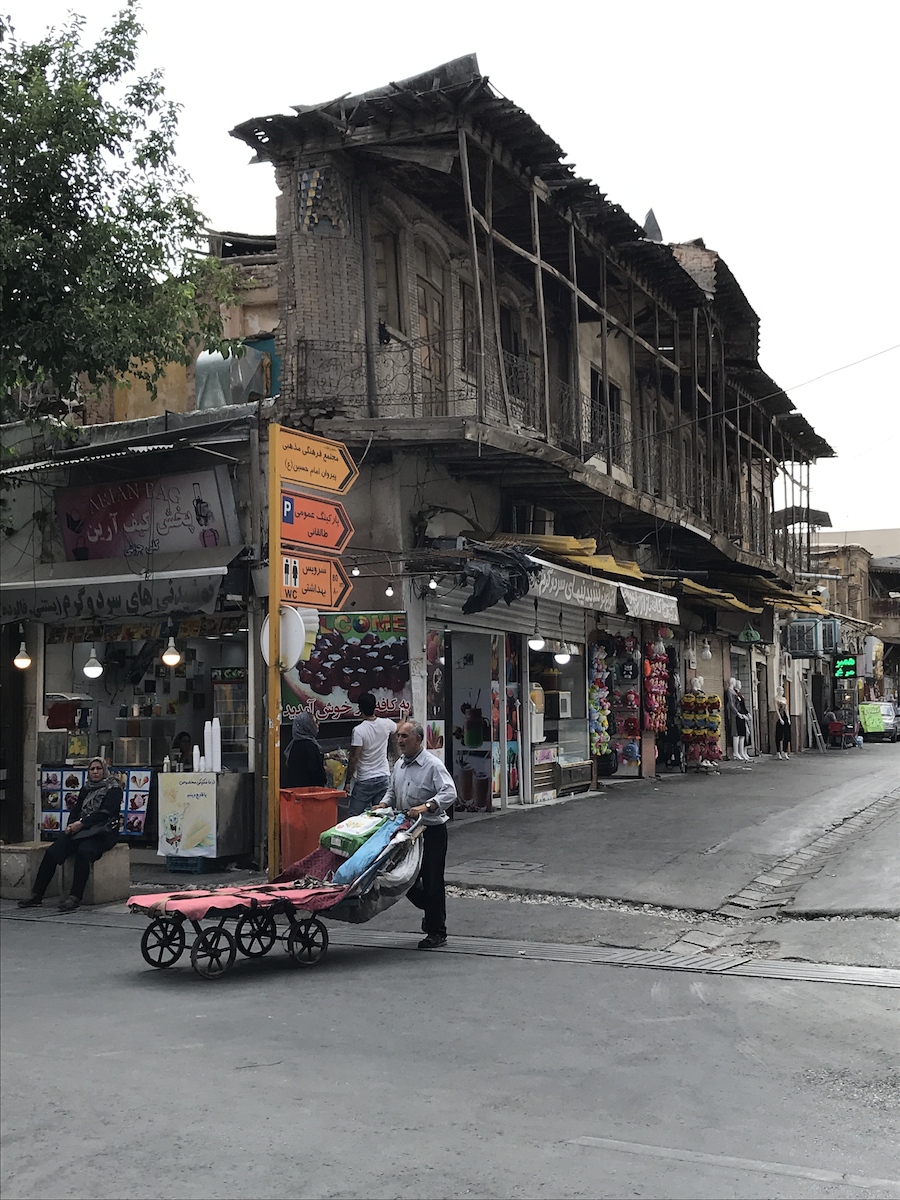 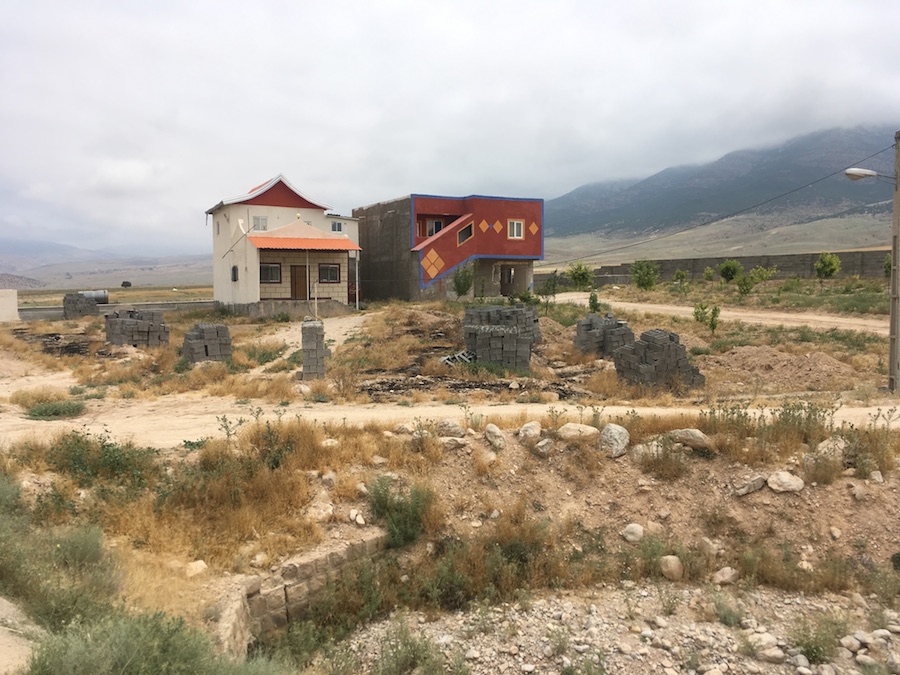 Have you ever taken a foreigner or a tourist home with you?
Have you ever invited a stranger to dinner at your house?
And if you haven’t, why not…?

In Iran we are hardly moving forward, the travels are going very slowly and this is only due to the incredible and unstoppable hospitality of the Iranian people. We have to talk and drink tea with everybody!
We arrive in Bandar Abbas with the ferry. We are a bit scared about the strict rules for dress code and we know about the complete ban of alcoholic drinks in the country. But already the second day we find the whiskey and the party people, or rather they find us.
On our way to Shiraz we do some quick shopping for the road and we are ready to make the travel. But then we hear a strange hissing noise coming from the car. We open the cabin to see where it comes from and within two minutes there is a mechanic jumping to the rescue.
While repairing the brake cable, because that’s what is hissing, he calls all of his friends. And in ten minutes we have a party group.
‘You can’t leave now!’, they say after the truck is fixed. ‘The party is just beginning! We are going to eat and visit a waterfall!’. And so we do. We climb a mountain and visit a waterfall, smoke a water pipe and instruct the Iranians to pick up their trash after a picnic in nature. Because everyone seems to love nature and it is a true pleasure to see people enjoying it so much! (although most of them don’t pick up their mess.) 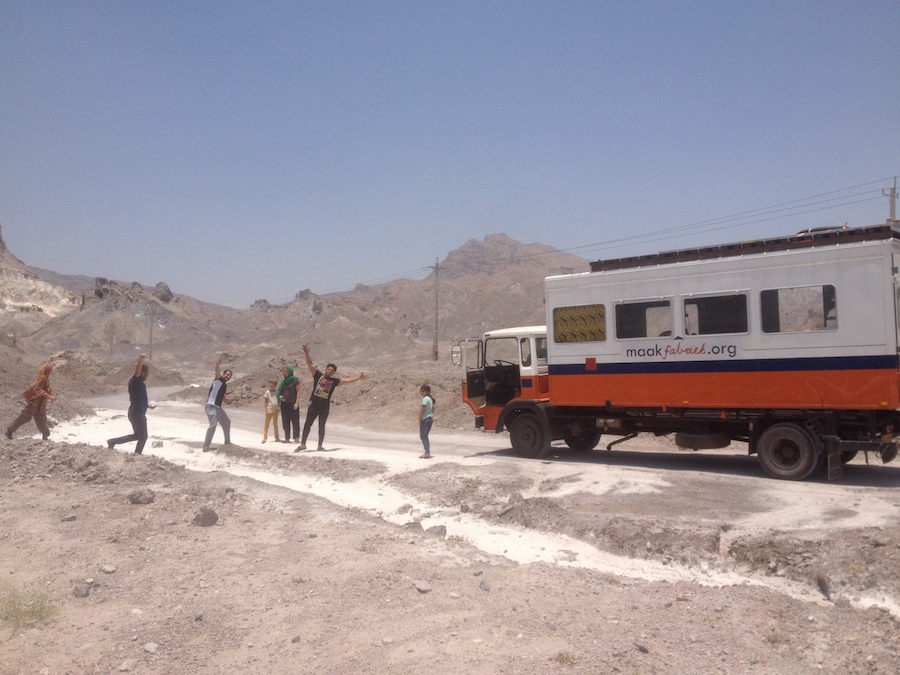 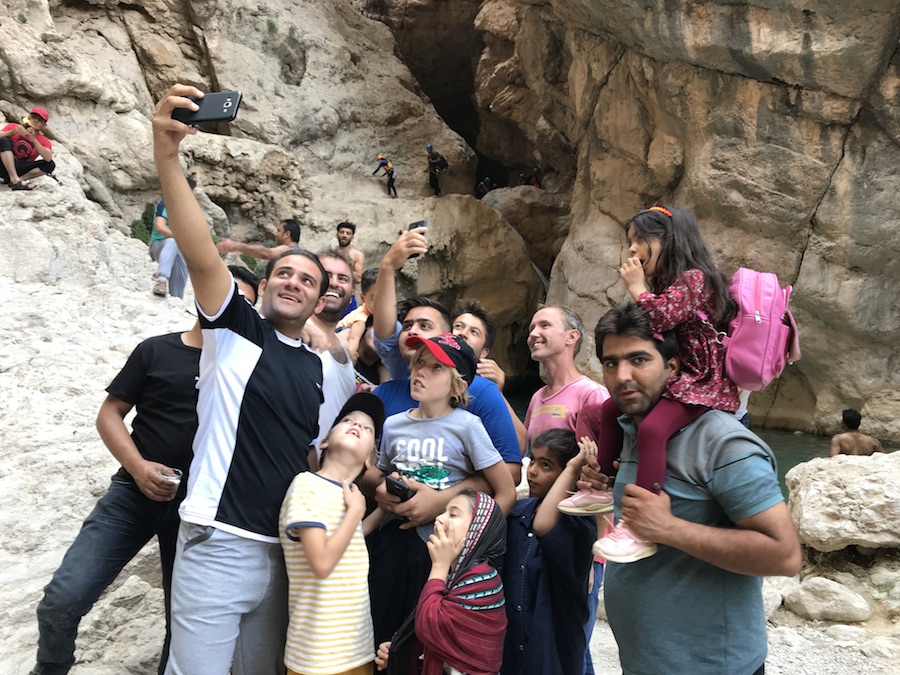 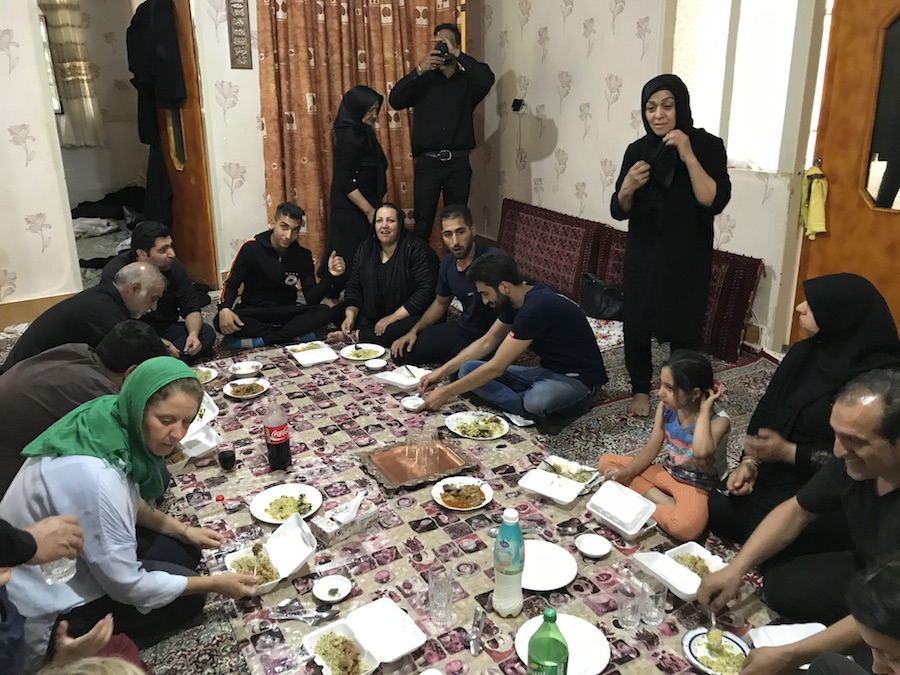 Further along the travels we meet this family entirely dressed in black. Their clothing scared us at first, because we thought they were of a very conservative branch of religion or something, but it turned out their grandfather had died three days before and the whole family was at home for the funeral. The mourning was apparently no reason for them to leave us standing by the road and we were invited to share the meals that were left over from the huge funeral gathering.

Everything in Iran is beautiful, from the tiniest shop to the biggest mountain.
The details! Like the windows with round corners and the cars that look like they are some unknown make from the seventies. Sometimes it feels like we are walking in a film set, so carefully taken care of all the things look.
People must love quality.
The delicious drinks that are served everywhere make you immediately forget about the absence of alcohol and make you realize how poor the drinks are if alcohol is present. Here we are talking rose lemonade with some interesting foam on top and real dried rosebuds, or orange blossom with golden seeds floating in it that whirl in your drink as you stir. Mint lemonade in copper mugs and big glasses of blueberry lemonade with frog eyes, as the kids call it, but that are actually chia seeds. There are walnuts and dried fruits everywhere, and people offer you food and drinks wherever you go.
The best gift was a set of three cucumbers handed through the car window from two boys on a motorcycle while driving! 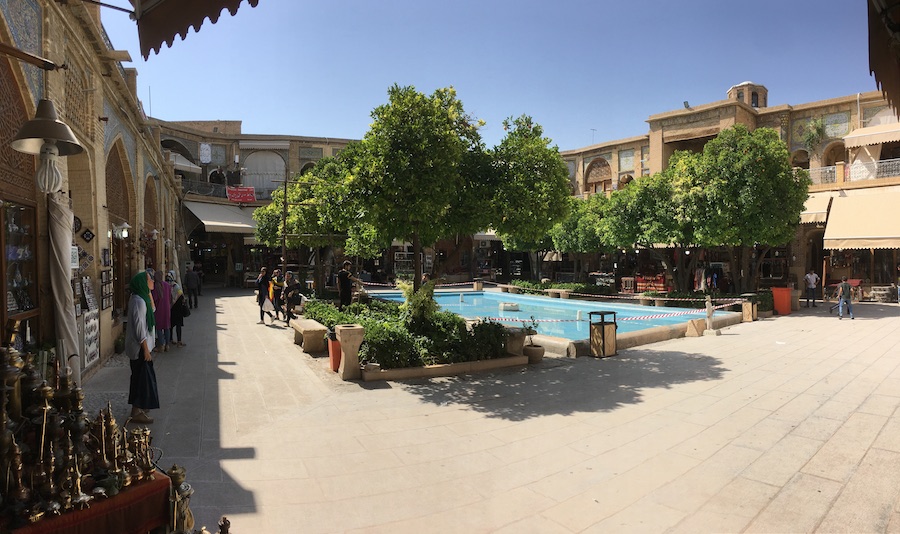 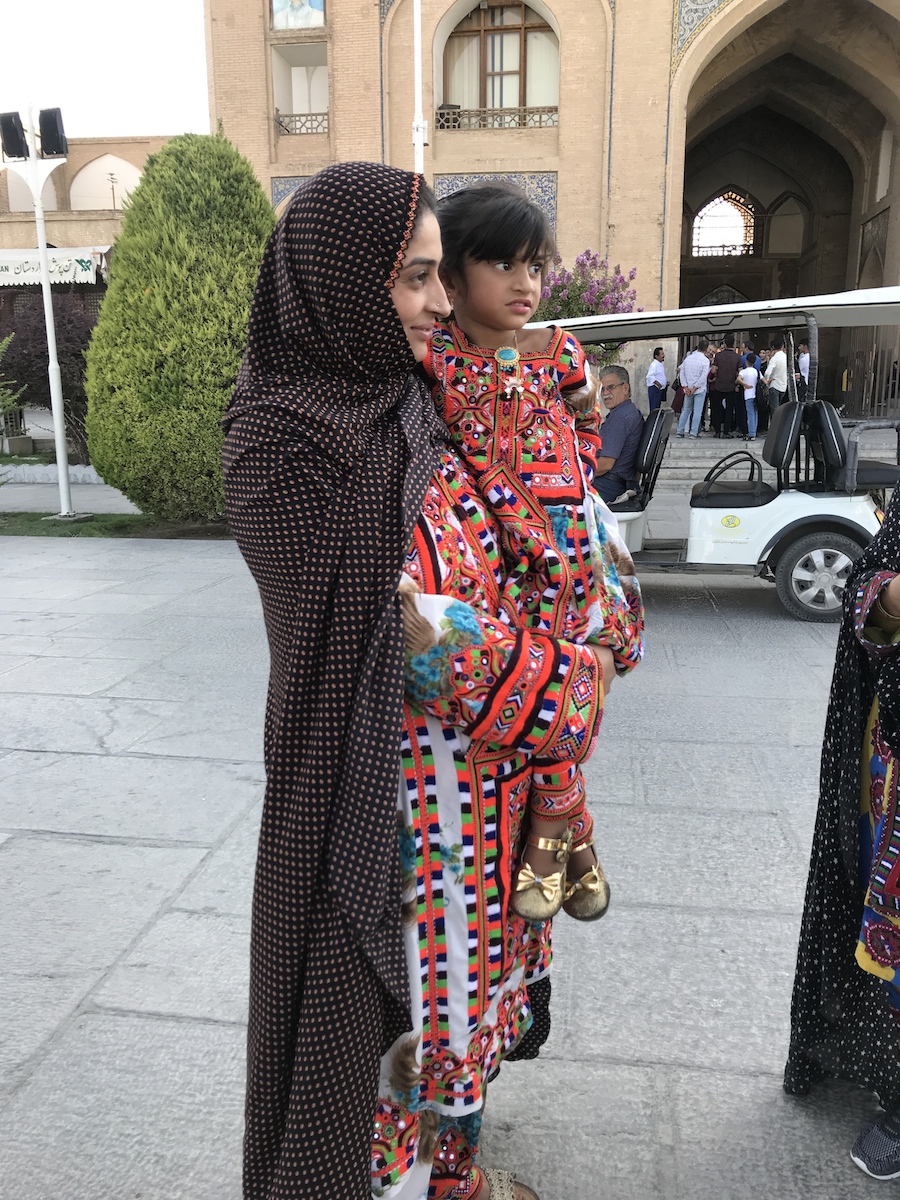 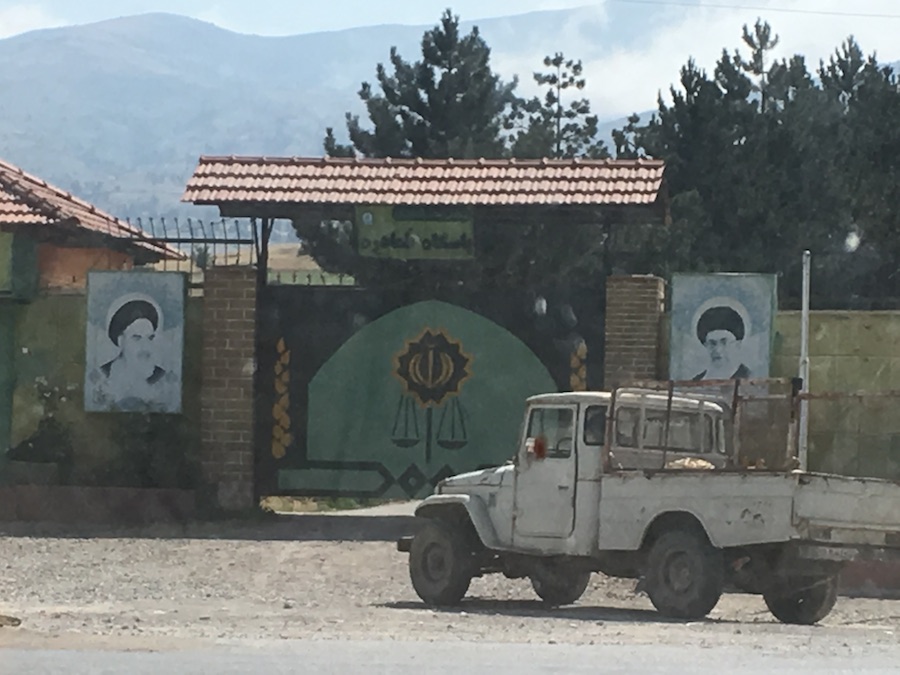 As we drive through this beautiful country with its wonderful people we fully enjoy the travels, and slowly the critical progressive people that the country holds are being shown. A cup of coffee along the road where an old man asks us to take of the ugly head scarfs when he wants to take a picture, a girl in the drugstore starts explaining why supplies are missing but it ends up in an interesting talk, a stranger on a parking lot spontaneously starts to talk about America and comes up with the idea to invite Trump over incognito to make him experience and enjoy Iran’s hospitality.
And so we slowly reach Tehran.

The Art-scene in Tehran 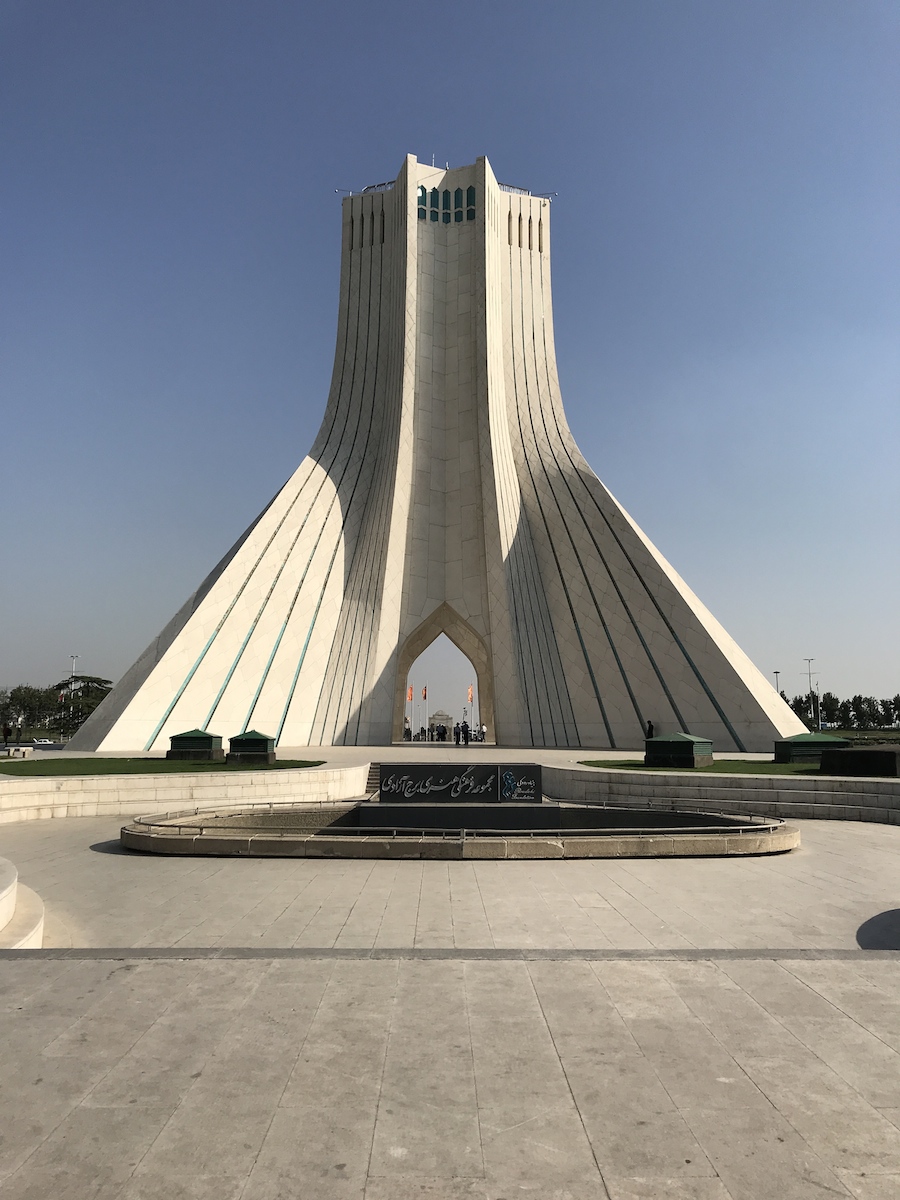 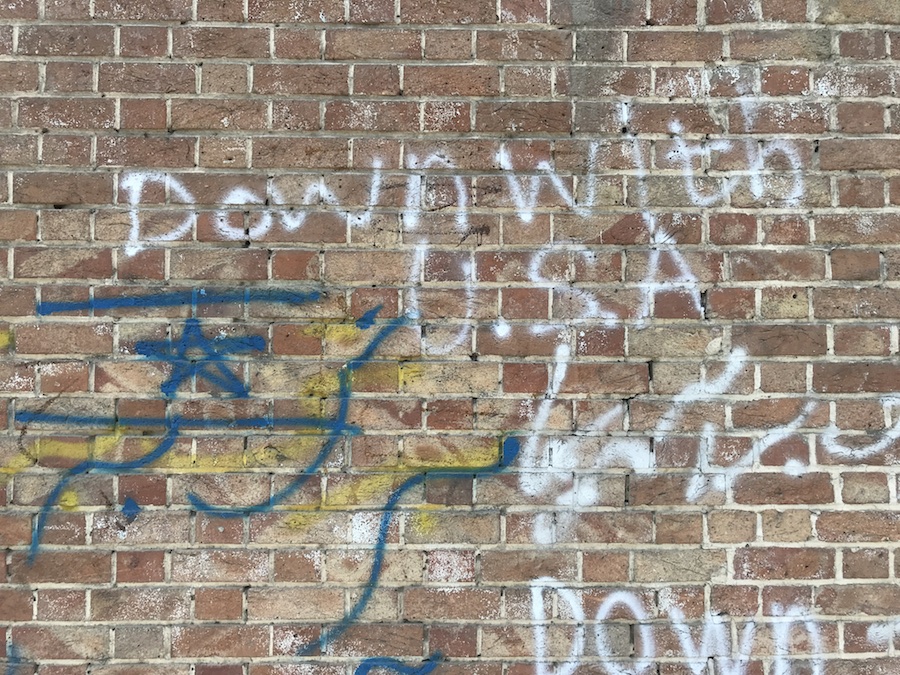 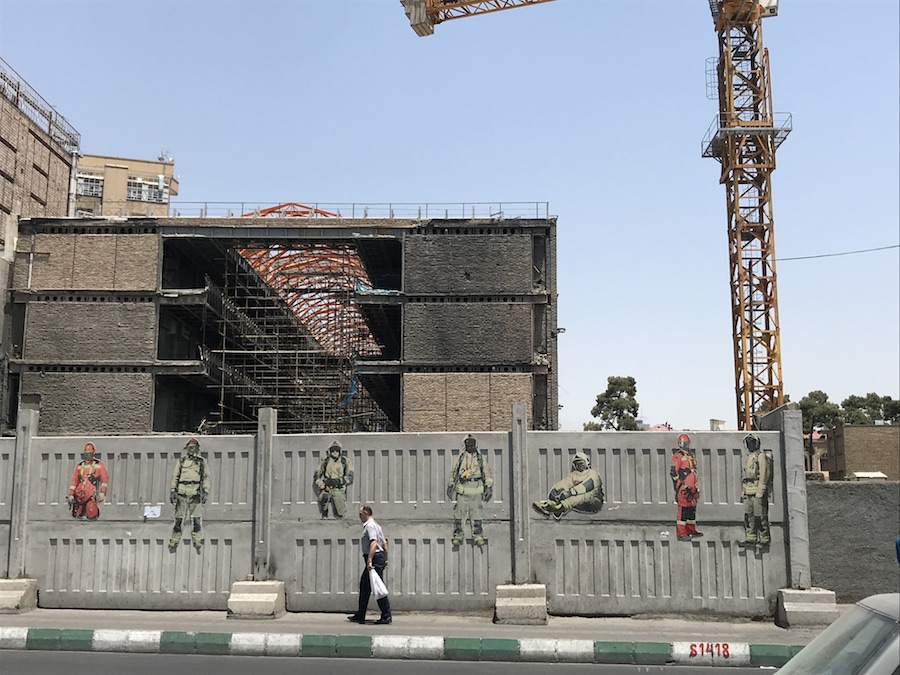 Staying around in Iran for two or three months is regrettably no option because we need to be in Belgrade in the beginning of August and because shipping the mobile making space took much longer then we expected. So we decide to explore the art scene of Tehran as thorough as possible. Our pick for the hostel is luckily bull’s eye. We meet the first night with a young woman, who is working as a poet and involved in theatre.
She recommends us to do a gallery hopping tour on Friday.
She explains us all about the committee of the government that decides on the content of art works that are being presented in public. They will visit for example a theatre play announced for the obligatory control visit on content. After permission is given to show the piece in public, it is usually changed in to the more critical version of the group’s real story they want to tell. And that is then actually shown to the public.
We discuss a hypothetical performance that came up in my mind and if it would be possible to show such a thing in Tehran. The idea was, to make a giant chador which can be worn by a group of at least 50 women and that looks like a moving sea with in the top parts the 100 wholes for the eyes that allow vision. Would it be possible to do this on the street?
She says there are plenty of critical private art galleries that would have no trouble showing this kind of content within their walls where there is no control, but such a performance would only be most effective on the street. On the streets it would be unthinkable she says, the government would be highly offended and break up the performance. 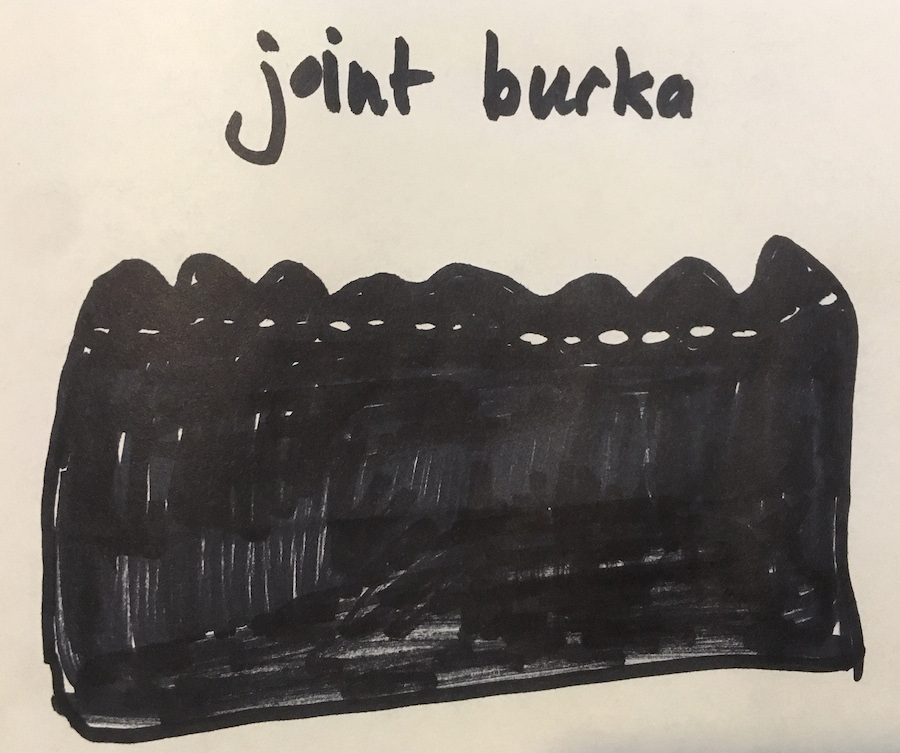 She tells us about the 30 woman that were arrested 2 or 3 years ago because the stood on top of an electricity point and hung their veils on a stick and held them in front of them.
Nobody exactly knows what happened to them and if they are still imprisoned.
Despite the very critical population and the government seemingly being sloppy with control, the rules are not to be joked with! 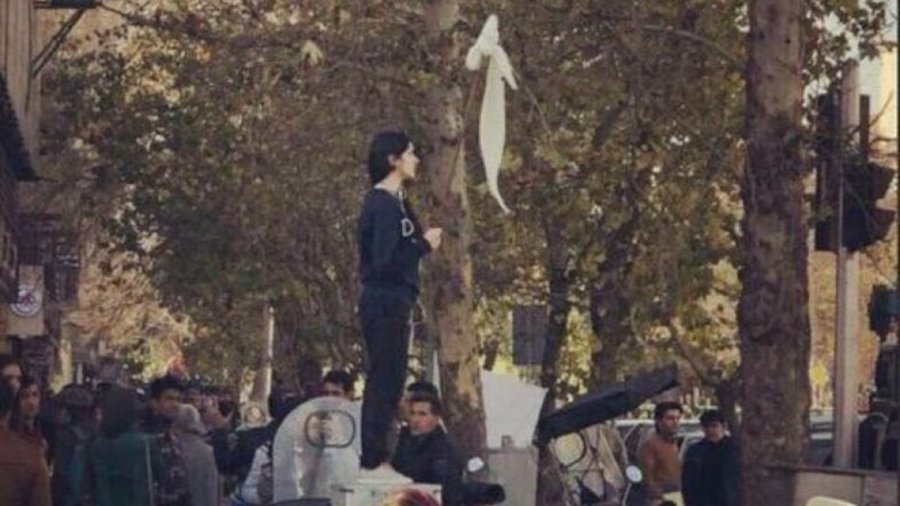 She explains that the revolution is now of a more silent kind and regarding the veil: it is coming down slowly and it is moving more and more to the back of the head. Sometimes it only hangs on the last tip of a pony tail.
In the artworks you should always look for an underlying meaning. There is a message underneath every simple looking drawing. This secretive atmosphere causes a very strong sense of togetherness amongst the people we realize.
As I meet with the tour guide the next day I explain her that I am mostly interested in speaking with artists. So for the gallery tour she arranges also a studio visit. 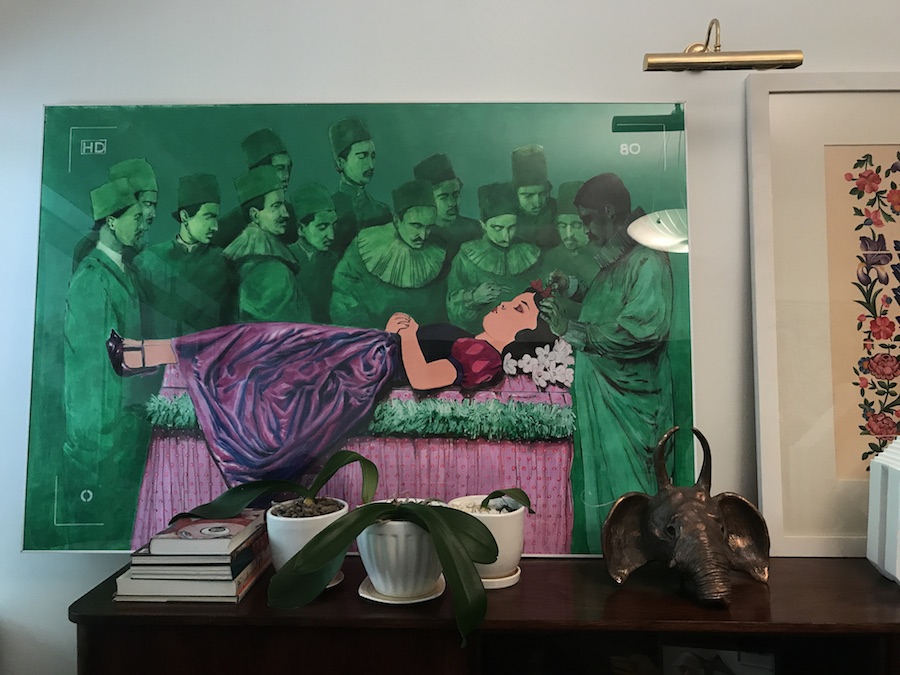 Painting hidden in the office of the gallery.

After we visit not less the three exhibition openings (!) we visit an artist’s studio. (As he is taking the picture he is not in it himself.)
The studio is situated on a square that used to be the prison for political prisoners. The four watchtowers on the corners of the square are still there.
He shares the studio with his friend and together they also provide cyclists with tools to repair their bikes. And by doing this so they independently try to promote cycling in Tehran. 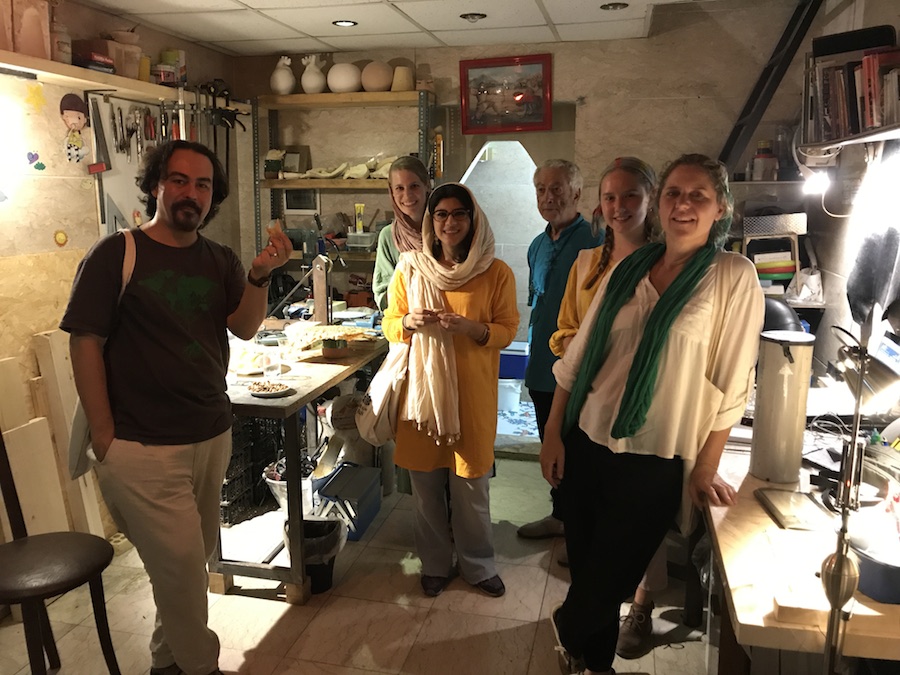 His main skills are in ceramics. His vases look like they are parts of a body. Vital organs that keep people alive but then made of the essential basic material of the planet: soil. In our language the name of our planet and soil are the same word: earth or aarde in Dutch. He shows us also a column that he made, consisting of earth layers but hidden in the layers are also plastic parts and waste of people that is now covering our planet and that probably will be dug up in the future as archeological excavations. An interesting perspective. We share a lot of matching ideas, and hope to be able to stay in touch.

Iran has especially made us realize how important it is to always be friendly to people. Also, or maybe specially the ones you don’t know yet. It is not an effort, it is a promise to a possible adventure. And it will mostly bring you energy, not cost you energy.

After Iran we try to hurry towards Belgrade to pick up our oldest son who flew home from Tanzania, and three friends that are joining us for the last leg home. We pass Armenia and Georgia and made a wonderful trip home through Europe, with beach in Greece, art in Belgrade and Novi Sad (cultural capital of Europe in 2021), peppermint coffee in Budapest, pie eating in Vienna, and Raststättes in Germany.
And no we are back to home base.
Back to life back to reality…