MakeFactory is now a good 5 months on the road with the project ‘mobile making space’ in which we create cultural movement on the spot, for and with the environment. With our traveling meeting- and working space, we collaborate with local cultural organizations and invite the people to join. So far we have been able to do quiet well in accordance with our values.

But our travels started also with a quest to create or find a sort of free space. A space in which we, and the people that we work together with, can make our own rules.
A place where the usual rules of society don’t apply. A place where we do not have to be limited by expectations, politics or money. This quest is one of the reasons we try to never involve money in our projects and try as much as we can to exchange services rather then to pay or get paid for them. This way we hope to create and share an alternative view on society with an artistic perspective instead of looking with an economical or political perspective which are much more dominant in society. 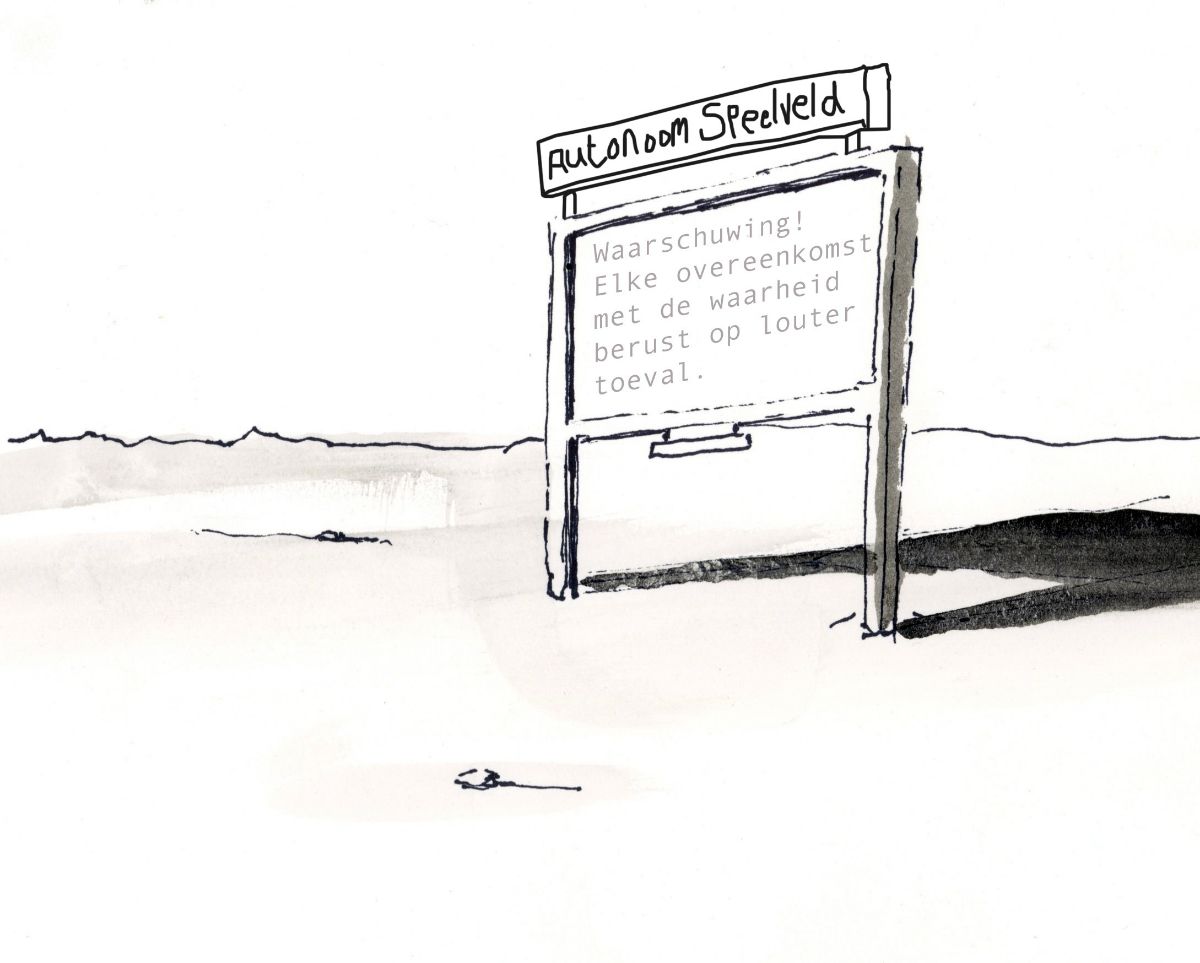 Autonomous playfield. Warning! Any similarity with the truth is purely coincidental

There are circumstances that complicate that, like inequality, or bureaucracy. Yes, almost we would not have had any project in Zambia because of bureaucracy but luckily we were able to create a work around. Here at Nafasi where we have been working now for almost two months, the quest is made a bit easier again.
This is already a free space of its own. It is a messy colorful terrain filled with workspaces, ateliers, documentary makers, sculptors, a dancing school and lots of smaller creative businesses. In the center are a bar and a kitchen that provides lunch every day, and it is the place where many conversations, discussions and collaborations arise. Everyone greets each other and not many things surprise the people working here.
In this place other rules are at work then the traditional once from the society outside. Boys dance ballet, and girls welder large sculptures. There are single parent families and people without religion. Many things that are accepted here are not quite accepted outside the gates. And that is why also many people like to hang out here that do not work as artists, but that do feel at home here. 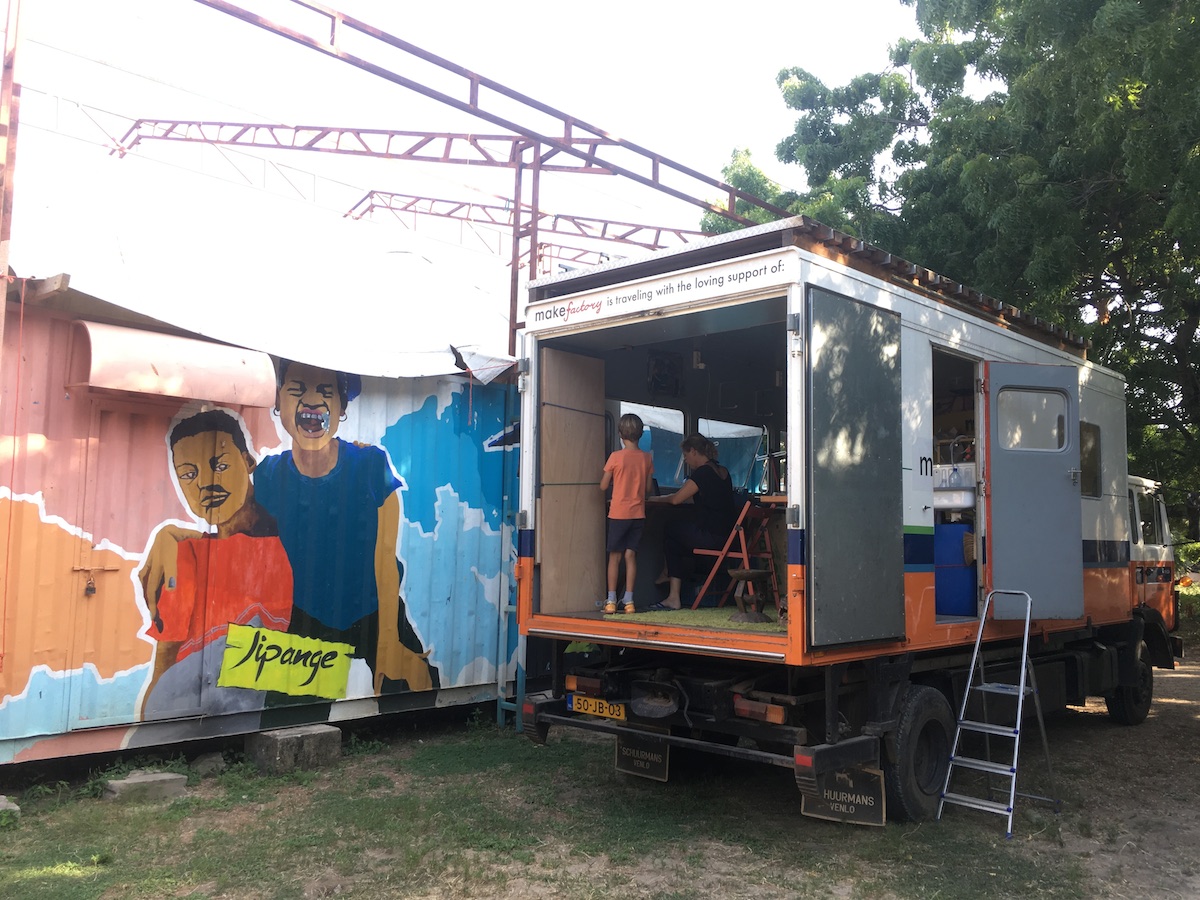 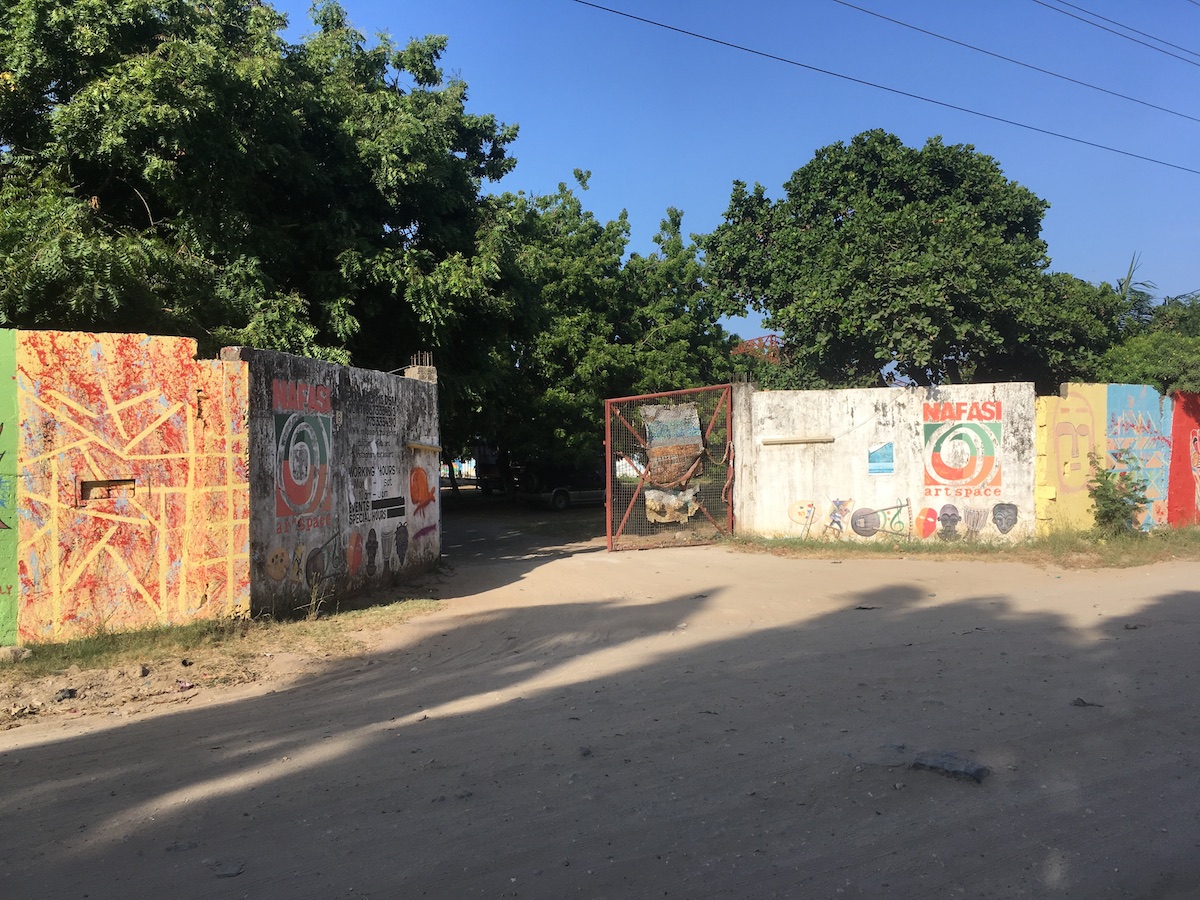 Zambia’s project was truly amazing and we are proud of it, but it was also very intensive. It was intensive to serve everyone’s needs and wishes as good as we could, but also to not share our opinion when habits or traditions are at work that are incomprehensible to us. A ten-year-old girl that runs an entire housekeeping after coming home from school, while her 20-year-old brother is at home without a job, is an example of that. The girl we talk about wanted to show her daily life in the book we made (view the book here). And we only show it, we do not comment on it.
But here at Nafasi there is another discussion alive, here it is about art. Everyone already agrees that the rules in the art world are different then the ones in the outside world, although they do sometimes seep in from under the gate….

Nafasi was already planning a big exhibition based on the question ‘How did we get here?’. MakeFactory was asked to give our artistic answer to that and to create a work for the show. 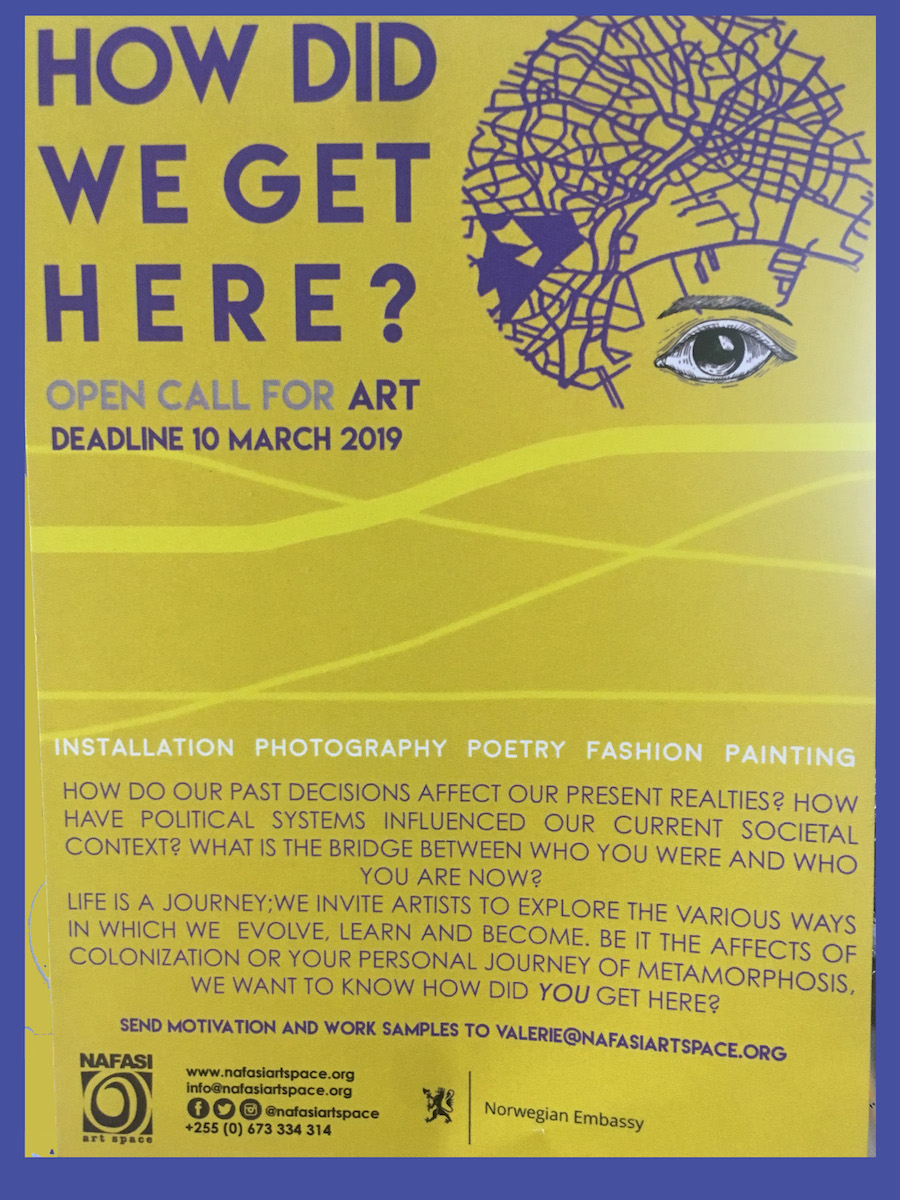 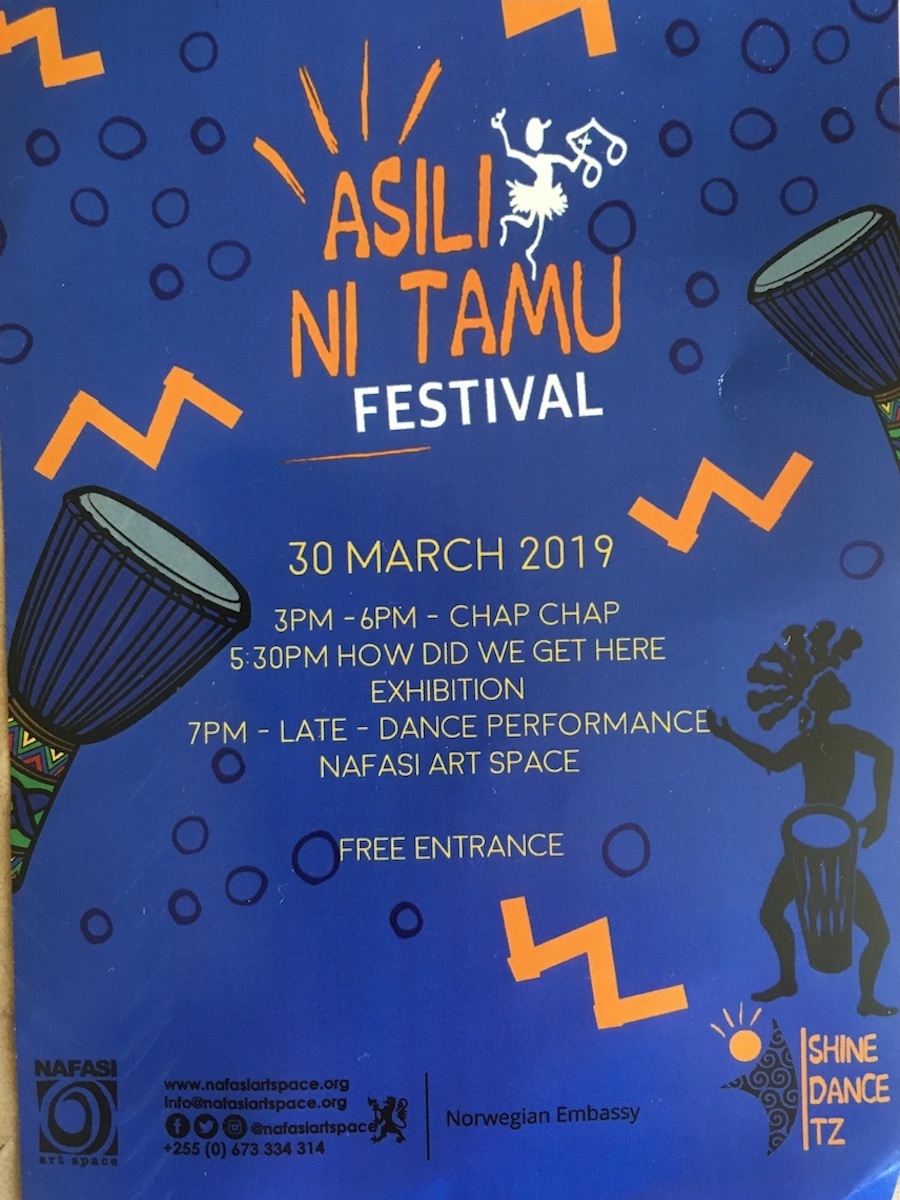 Our personal travels and metamorphoses have everything to do with our actual travels of course. We wanted to make an answer to the question as a group and not from the perspective of one person. So we looked at what applies to all of us. We chose to approach the question from our new and changed view about ‘home’. What does ‘home’ consist of now that our home changes all the time?
It is no longer connected to the objects or the physical house that normally surrounds us every day. Although objects can make us feel at home somewhere they now resemble another quality to us. They are much more replaceable and we look at them mostly as useful items and not as personal items.
All together we created the installation ‘floating home’. A collection of single, seemingly fallen apart, objects, that you could normally find in a house but that seem to have little meaning. In between and around them seeps a blue liquid that is leaking from several objects and that connects the single elements together. 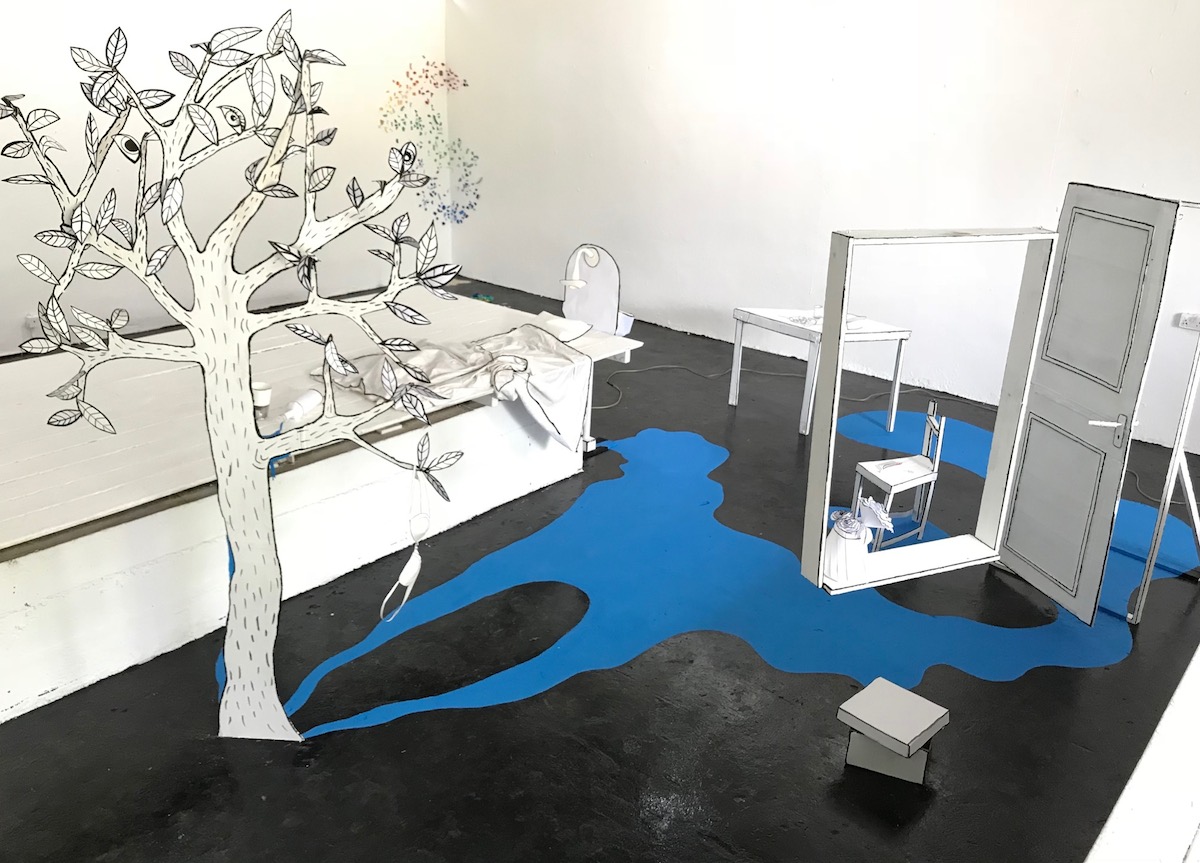 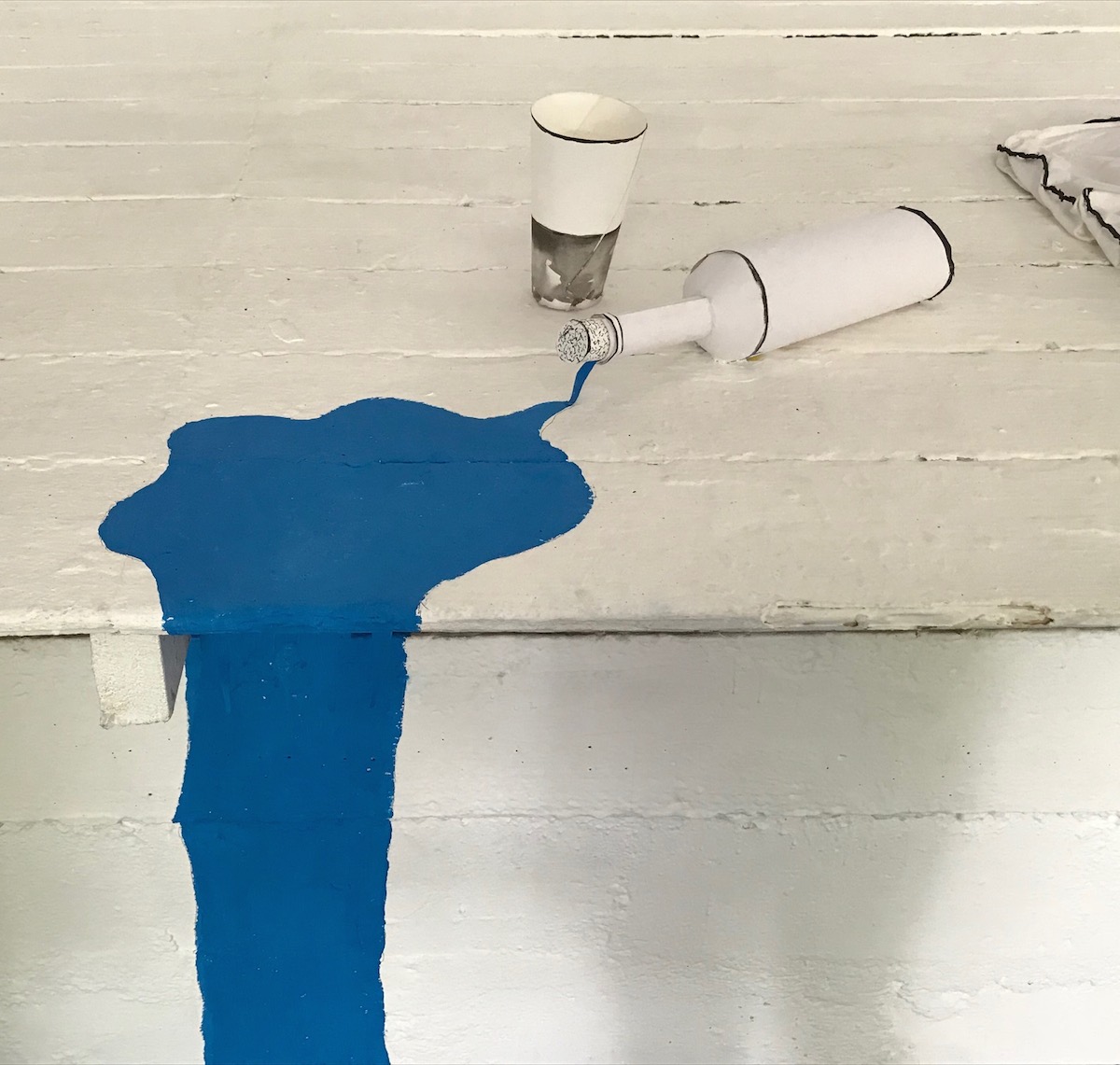 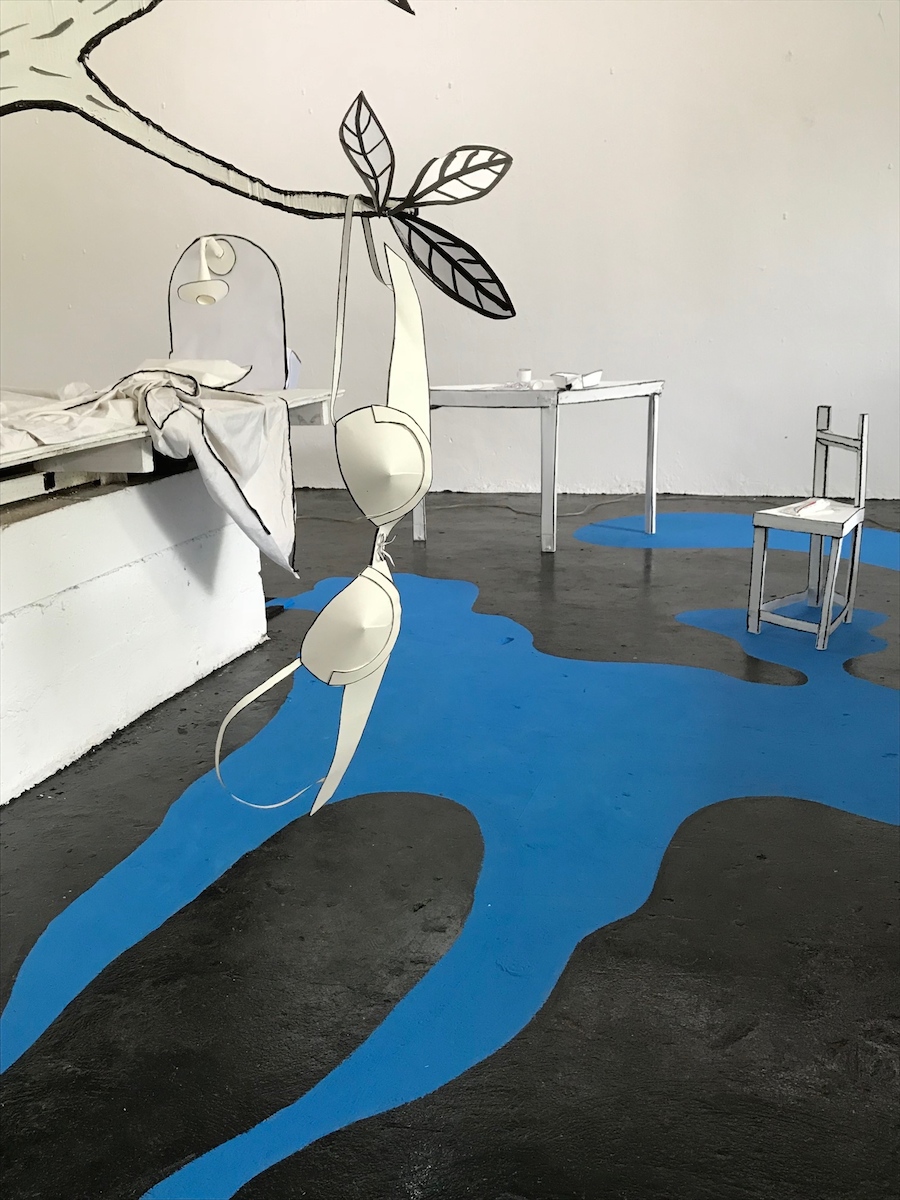 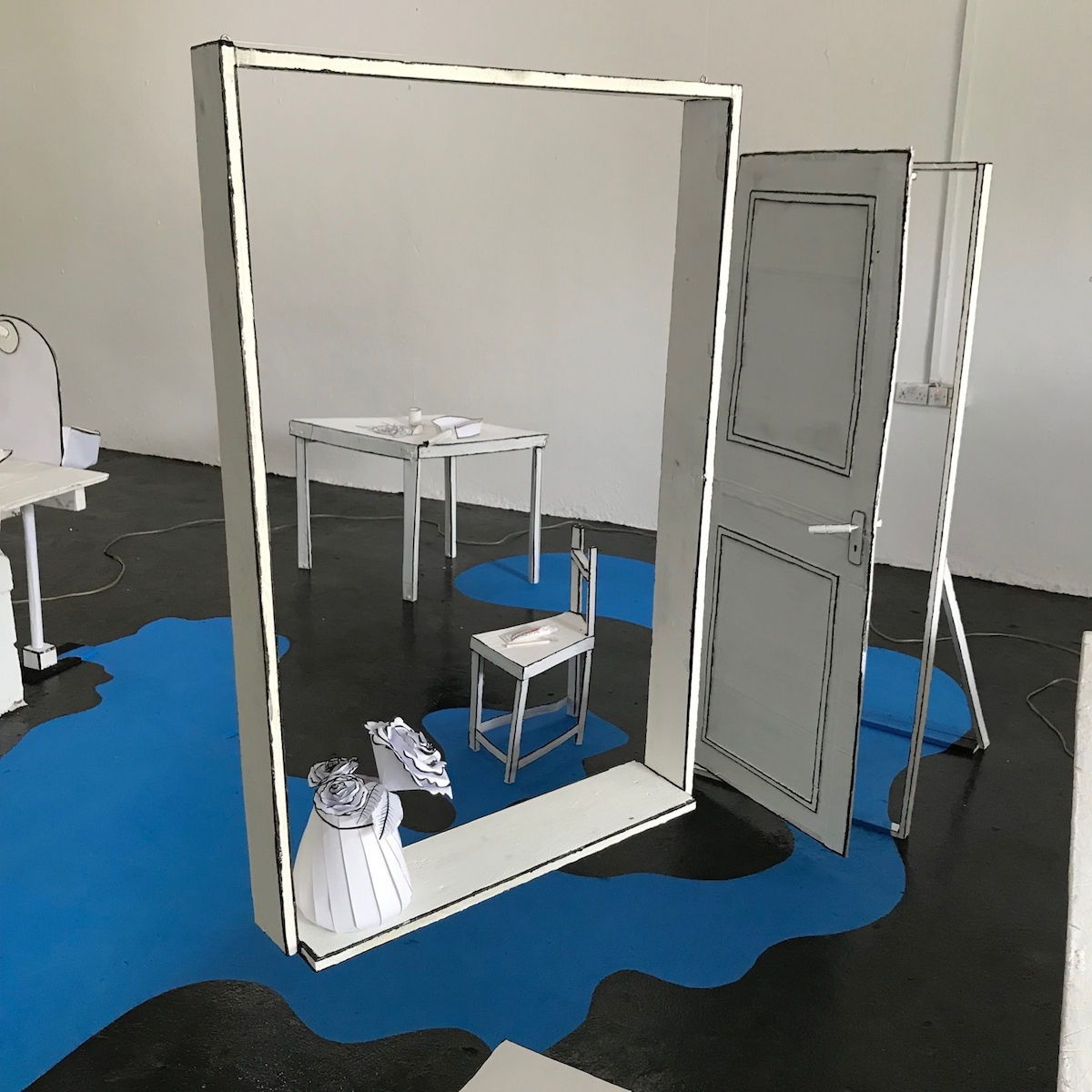 Joseph, a choreographer who has studied at Muda Africa, which is the dancing school here at the terrain, made a performance together with dancer Boni, especially for our installation. The performance was shown at the opening of the exhibition and the festival ‘Asili Ni Tamu’ that took place on the 30st of March. During the performance, Boni washed his face with the blue paint that was streaming from the paper sink, after which he shook hands with people from the public with his paint-covered hands.
The blue paint symbolized the connection to the people. And it is that connection that can create for us a feeling of being at home while we are traveling. 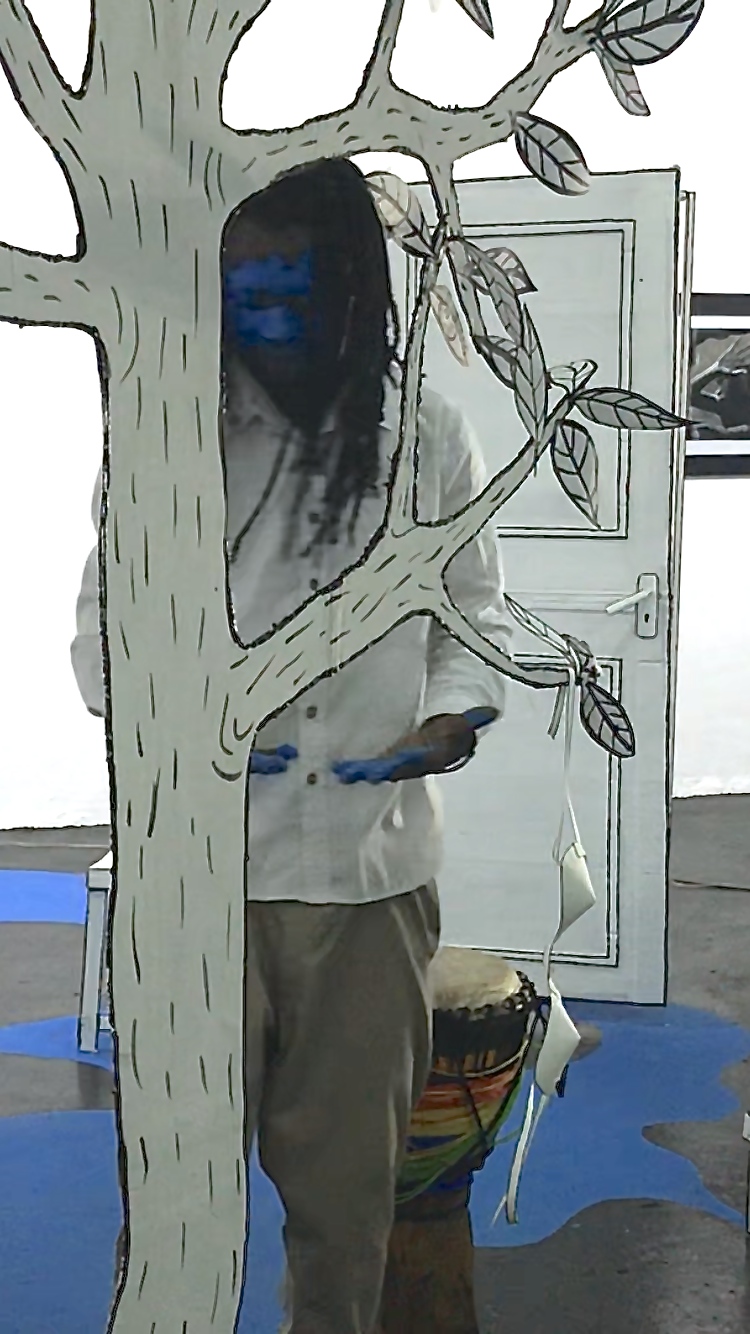 We expected many people to refuse to shake hands with Boni, but that didn’t happen at all. Everyone except one man took his hand. And after the performance had finished the people with blue hands started shaking each other’s hands as well. 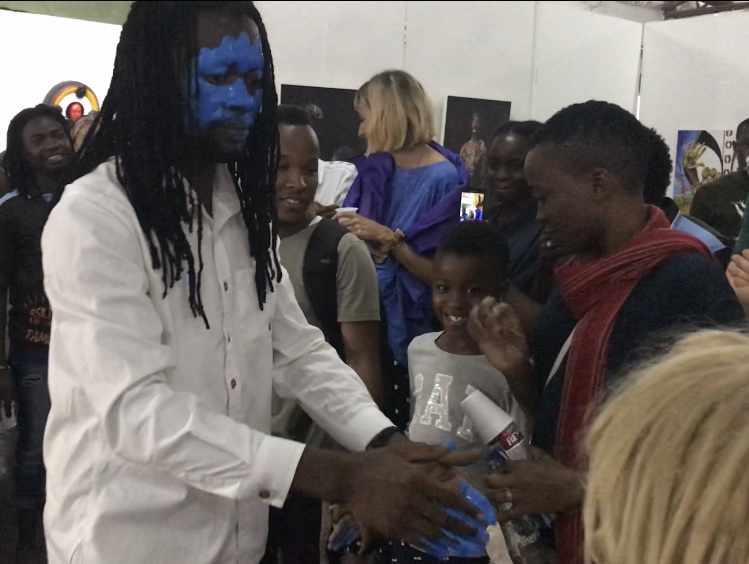 And while we were all creating paper objects together, there was also a cat being adopted, a master class given at UDSM, University of Dar es Salaam, in cooperation with artist Safina Kimbokota, a chap chap given together with Tanzanian FilmLab and a tree house built by Mees and Sake. Yes, we worked a lot!

Although we got to know the art scene pretty well and we could of course call Nafasi a community, we have to admit that our ‘floating home’ was also standing on a floating island. We know little about Tanzania’s other communities besides the art community.

We do know however that the art community is discussing one very dominant issue: Tanzania’s identity. And this is the issue with which the rules from outside seep in from underneath the gate. It seems as if everyone is very much looking for it, and most artists seem to think that Tanzania is currently in an identity crisis. Swahili has united many tribes but it may also have caused the loss of some identities.
Unification is maybe always causing identities to become lost or forgotten. It is a complicated issue that feeds discussion but also allegations and prejudices. But luckily it also results in artworks, as the exhibition ‘How did we get here?’ shows. 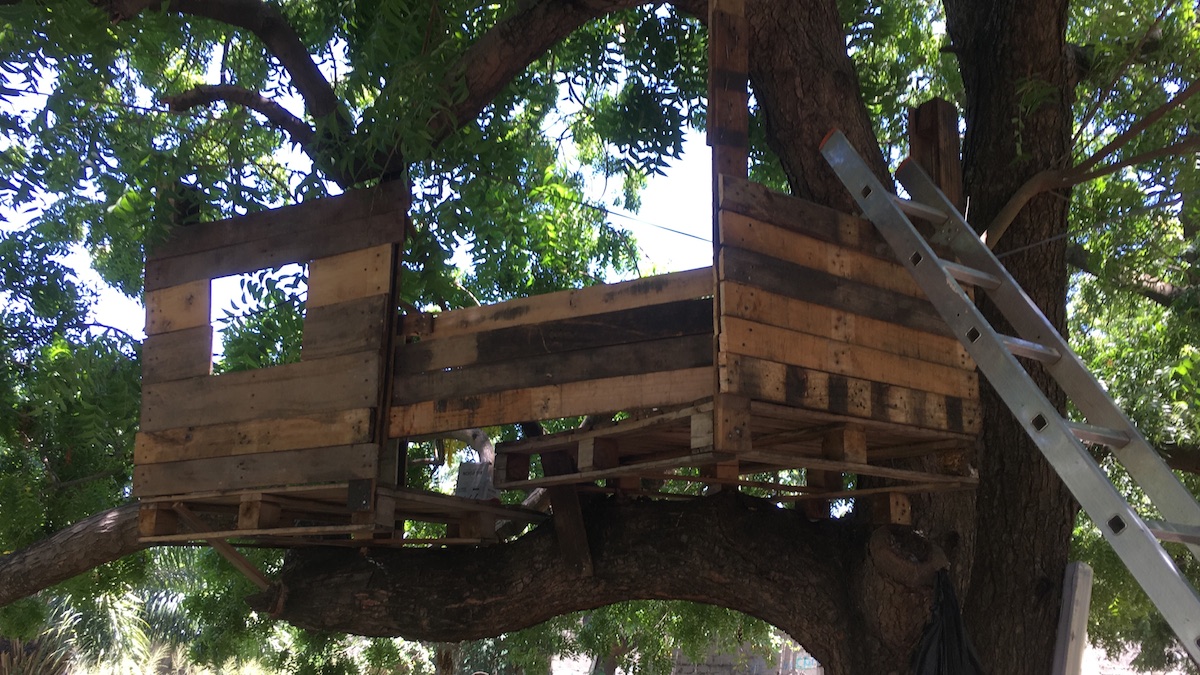 In the meantime, we want to let our floating home drift of slowly towards new locations. But it isn’t that easy. And while we spent long days at home waiting for sudden action that needs to be taken, interspersed by days of visiting the hot city to find new shoes for Sake, it is slowly getting closer and closer to the date that the ship is leaving and the visa for Tanzania are ending. Will we make it at all to India?

After two weeks of visiting offices, doing paperwork, and a visit to the tax office (our road tax turns out to be expired) it turns out that shipping to India is going to be to expensive and it will take to long. We would have to wait in Mumbai more than a month for the arrival of the Magirus. Next to that, it turns out after a bit of research that there are only to ways leading out of India over land. One is going through Pakistan. From Pakistan we would have to take the only border crossing with Iran to be able to reach Europe. It is possible, but only while you are being escorted by a heavily armed anti-terrorism swat. Plus the border is all the way up north, so it means that we would have to cross the longest distance through Pakistan. It’s not a good plan with young kids.
The other route is very appealing: via Nepal to Tibet, up through China to Mongolia and then left through Kazakhstan, and Russia to Europa. Fantastic! Distance: 15,000 km.
After a bit of calculating, the Magirus maybe can do a maximum of 40 or 50 km per hour, and we don’t want to drive more then 4 hours a day, we conclude that it will take us three months and then we can not stop for even a single day. Petty!

So a change of plan: we ship the Magirus directly to Iran, drive through Armenia, Georgia and Turkey back to the Netherlands. The good news is, we have a very special and interesting contact in Iran. A girl who is a graphic designer in Iran’s art-scene in which almost all artistic expressions need to be done underground.
So the whole crew is a bit sad about India, but we do have the time now to do a very interesting project in Iran.