We already discussed with Grace (Barefeet’s director) the first meeting that a village visit would be essential to find out about Zambia’s rural culture and also to experiment on how the truck could function as a cultural meeting space. In the last weekend we plan to go. It is a special visit. Grace’s mother comes from the village we are going to visit and she has not been there for more than ten years. Also Grace’s brother and sister join, 6 children, and John, Barefeet actor, husband of Grace and our friend. 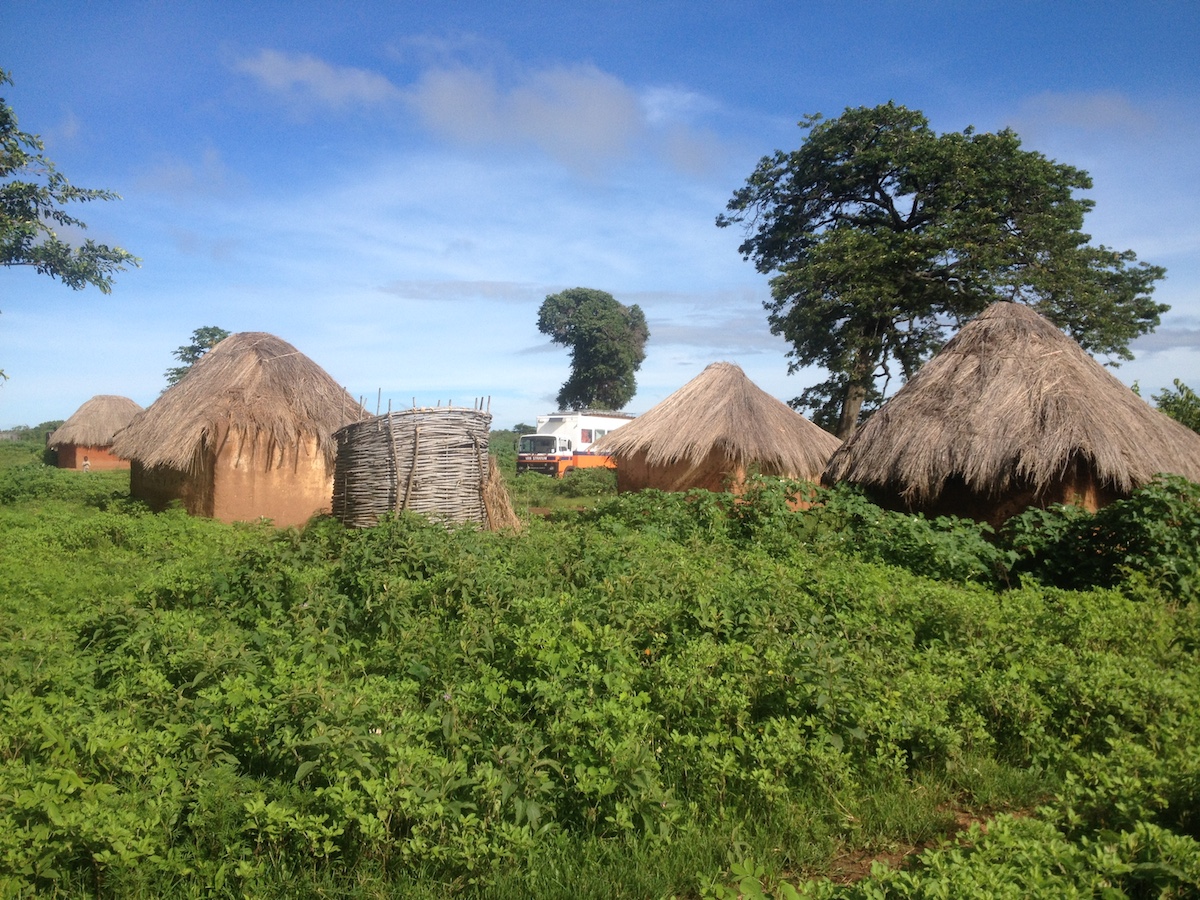 The Magirus between the huts.

The village is truly beautiful. The huts are round and made of the typical red clay out of which the Zambian soil consist. If for some reason the village would have to be abandoned by its 700 inhabitants, it would be perfectly absorbed by nature.
There is no plastic to be found. And the rare plastic items that are present are carefully reused. The large 5 liter water bottle that held our drinking water contains a homebrewed maize beverage the next day. 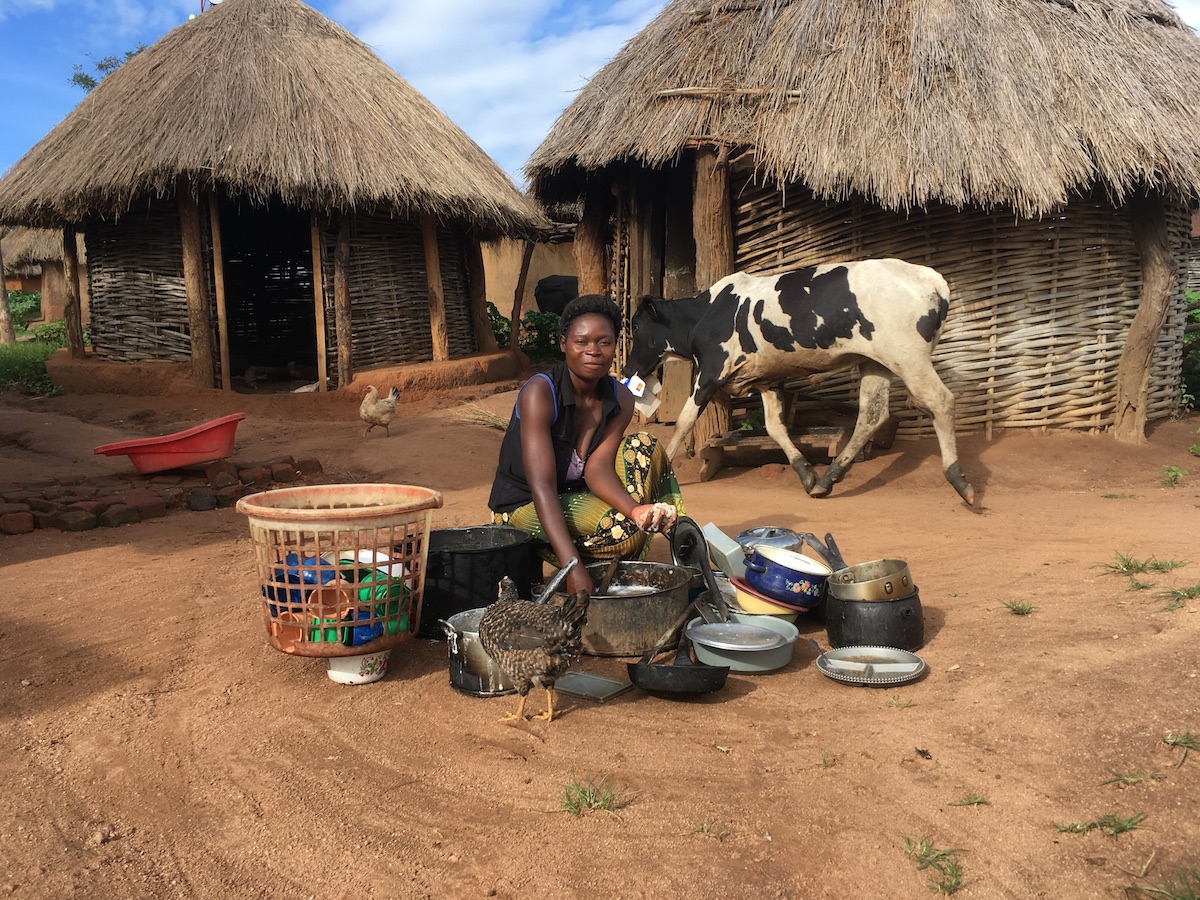 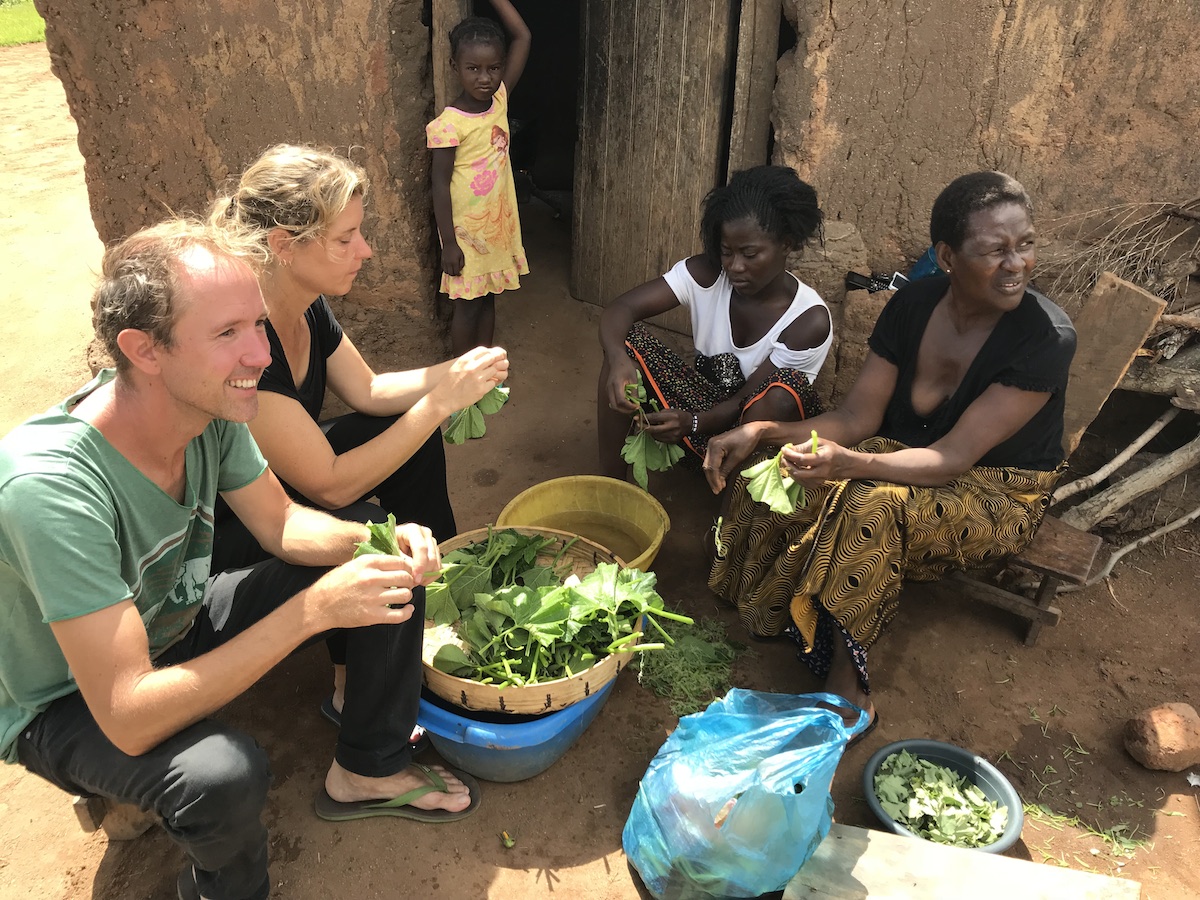 We arrive late in the evening in the village. Although everyone has already noted the truck, we are only calmly being approached the next morning around ten. “Hello, are you looking for something?”, says an older gentleman. We explain that we are visiting the sister of Dorothy but we forgot her name and since Dorothy hasn’t been in the village for more than ten years, the man does not know who we are talking about. But then we remember her daughter’s name, it’s Maragareth. “Ohwohw” he answers. Which means something like okay. With his hands on his back the gentleman is quietly watching who is coming out of the truck.
If we are all together on Rose’s courtyard, (because Rose is her name) to drink tea and eat maize porridge for breakfast, a group of children gathers on the side of the yard.
All the grownups are working on the land untill around 11:00 and then return for lunch and start the other work that needs to be done.
So only around 12:00 or 13:00 the few small shops open that sell things that are difficult to make by hand, like washing powder. They also sell some candy and chips and soda’s.
The kids are peaking at us curiously, but if we try to approach them, the run like shy little creatures. In our group is also David, a three year old toddler, who is the son of Grace’s brother. David enjoys the children running away! He pretends to be a monster and chases them away. 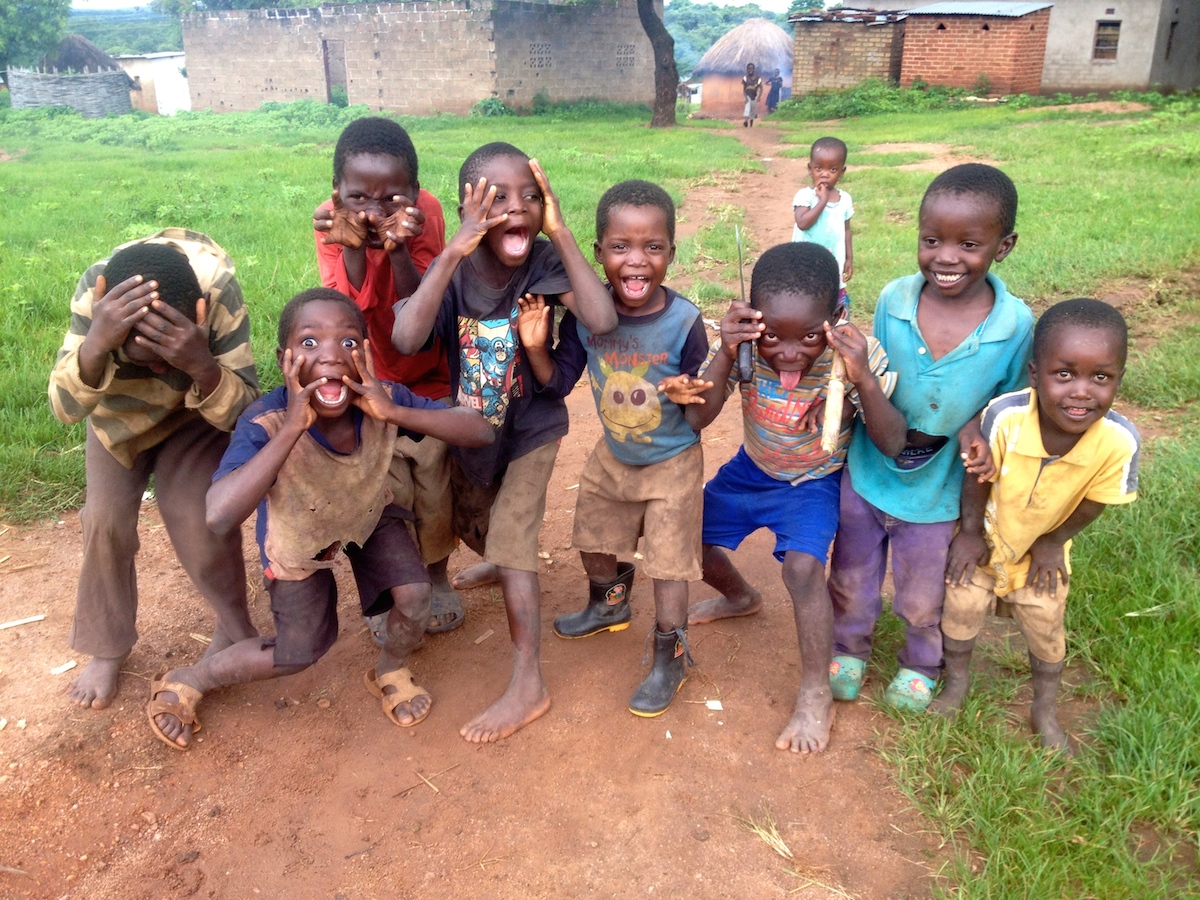 For the kids from Lusaka the village life is just as new and different as it is to us.
In the afternoon many people are passing by to shake hands and say hello. Some of them are curious about us, and ask us what we think about Zambia, while others come to speak to Dorothy, who they still know from the past. At dawn something needs to be picked up from the Magirus. When we arrive, we find a group of kids gathered around the truck. We show them an old trick, looking like the top part of your thumb comes off. The kids jaws drop, as the scarely watch the trick.
We carry some thumbs with magic lights with us. We perform a spontaneous show. The kids love it, over and over they want to see the tricks. If we become tired of playing the tricks over and over, Rose summons them to go home. And well-behaved the kids turn around and wave goodbye.
Village life is calm. People are occupied with the daily necessities, and maybe with planning activities concerning the seasons. There’s no ambition or pressure to reach a certain goal.
Grace tells us that a few family members have tried to live with her in Lusaka. They had the chance to study and build up a life, but eventually decided to go back to the village because they couldn’t adapt to the city lifestyle. After sharing the slowly village lifestyle for two days, and enjoying the scurrying pigs and chickens, we can relate to their decision.
But still, after some time, you start to wonder if it wouldn’t be possible to provide the shoo with an actual toilet seat, the same system would remain, but it would be more comfortable. And a shower, without any water piping, is not difficult to realize. It’s easier than washing up in a bucket. And in the kitchen you could easily make a counter, with a small pump, so you don’t have to scoop up water from a bucket. And maybe the windows…. and the…., and so you can go on and on, and before you know it, you’re have something that people call development. Something that results in wanting more. It can always be better, improved, and innovated and eventually you have urbanisation, and cities that make huge pollution.
Luckily it was just a daydream in a village somewhere in Zambia…… 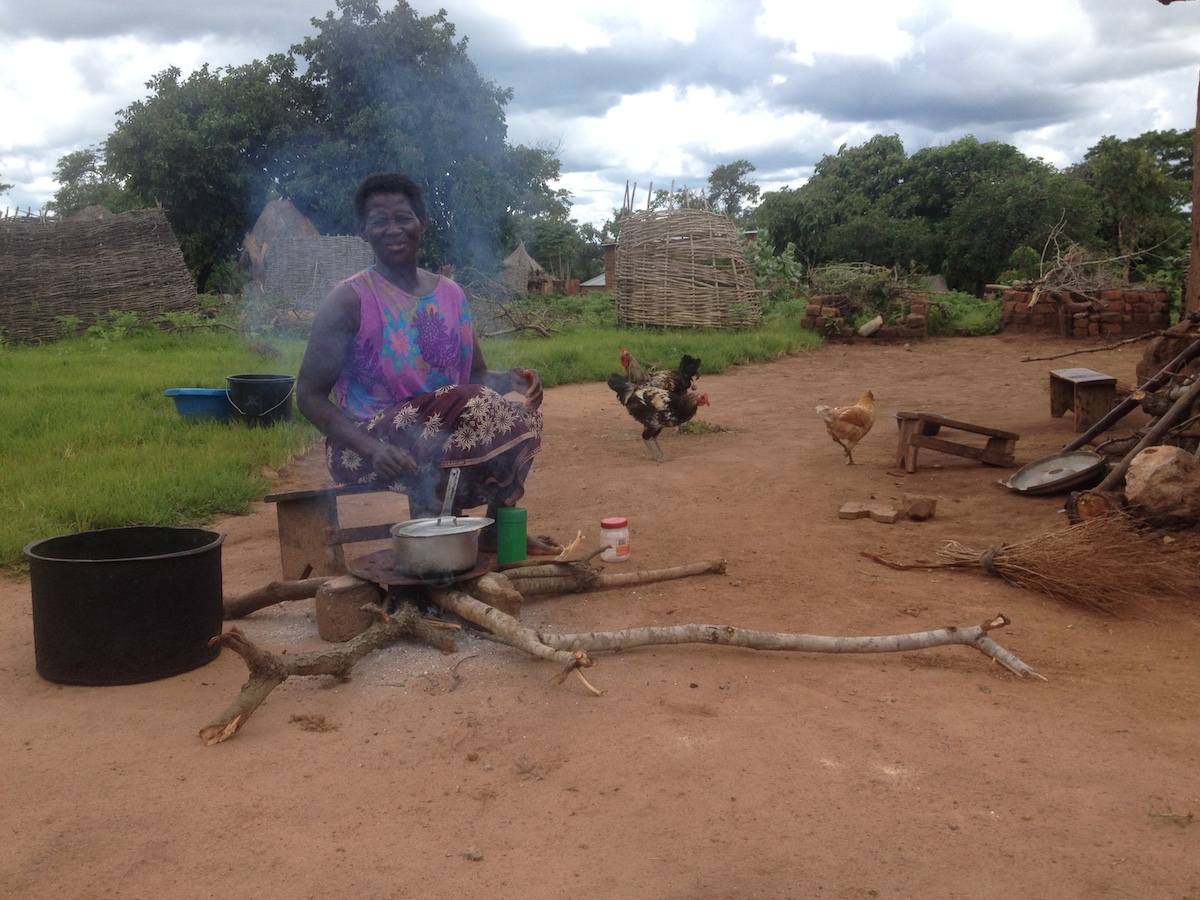