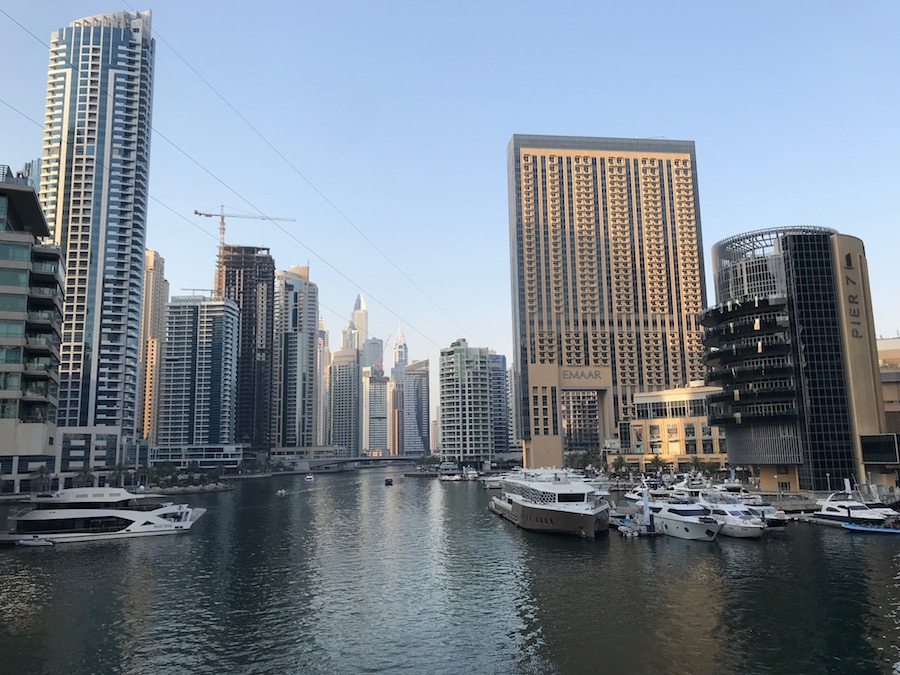 Dubai came on our route because of the shipment of our truck. Luckily a close friend of us, Boba, is living there and working as an architect. Otherwise the Dubaian life is unaffordable. Boba invited MakeFactory to do a Friday afternoon design talk about our projects at the architectural Bureau Perkins and Will.
After the talk we met with some lovely people whom we later that week had an interesting dinner with including a parrot landing on Juli’s head!
We stayed in Dubai for two hot weeks and met with some very nice people in the art scene and fashion. But it doesn’t go unnoticeable that they are all coming from somewhere else. Sudan, Iraq, Serbia, Philippines, Kenya, Canada, Morocco. Just to name a few countries where the people that we met with came from. 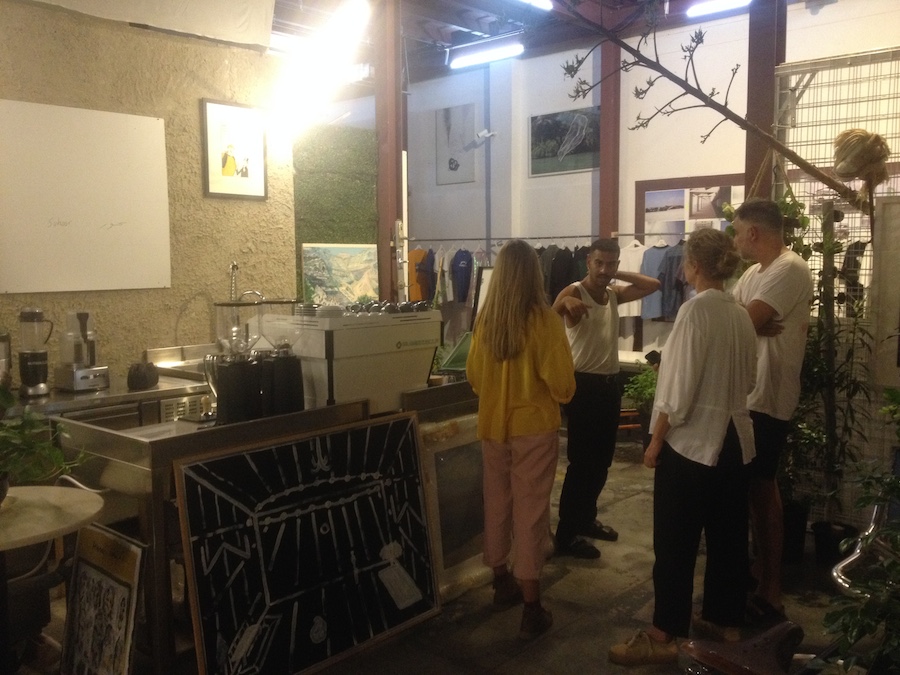 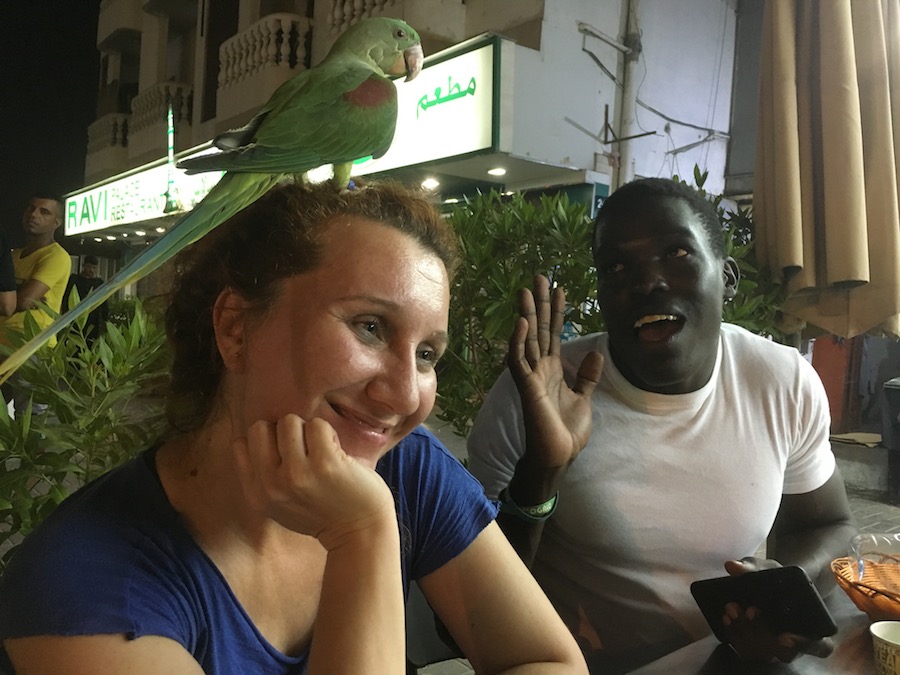 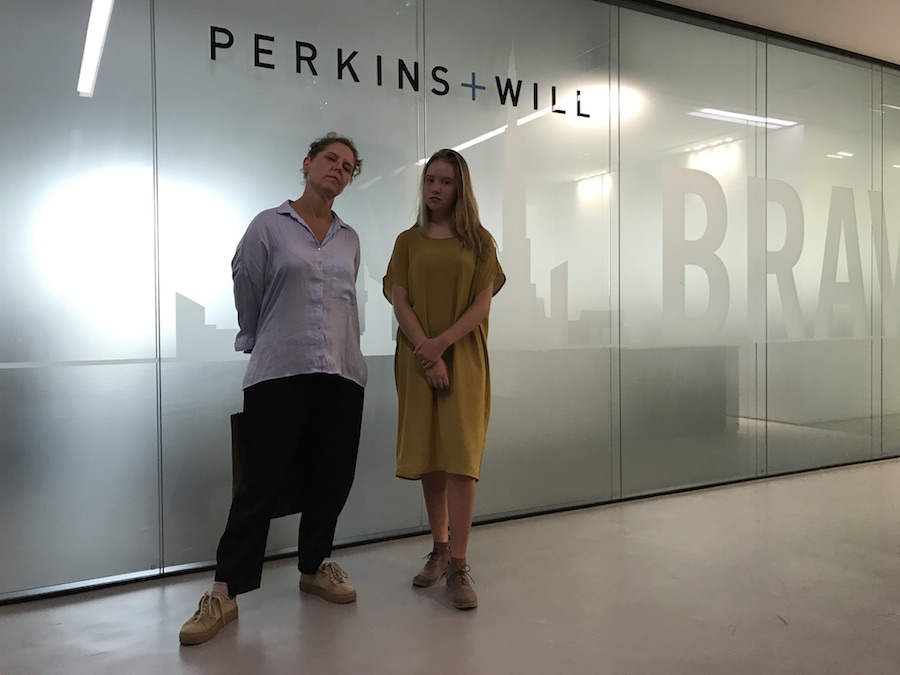 It isn’t surprising since 10% of the population of Dubai is Emirati, and the other 90 % are foreigners doing the enormous amount of work to keep the theater of Dubai running.
Because that is what it looks like to us: a theater. On stage the enormous towers, the acclimatized Starbucks, the shopping malls, the metro swiftly passing high over it all and under, the 13 lane highways. Because Dubai is not for walking, it is designed for cars.
There are hardly any people on the streets. Everyone is inside. If you need to take a bus, for some reason (which rarely occurs), the stops where you wait for one are also air-conditioned. When we were in Dubai it was Ramadan. No eating in public spaces. “Everyone is out” says Boba, “they are all on holiday”. By ‘everyone’ he means the Emirati. “We stay here to work” he continues. He works in a higher range job but backstage are the workers that keep the show going. Organized and separated in all gradations of payment and education level. The poorer ones with uninteresting jobs stay in worker areas where they are brought to, and being picked up from, in the typical white busses for group transportation. The richer ones live in the huge apartment buildings in town. But all of them are unable to built up any of the same rights that the Emirati have. You can’t save up, you can’t go with pension and you can never become an Emirati. Sooner or later you are going to have to leave. Old people are hardly seen.

The people here seem to be mainly occupied by building higher and more impressive. Anything they don’t have can be bought. Later on we see some Emirati woman shopping in Dubai mall. They are covered in black. But the black robes they are wearing are made of luxurious materials, fine fabrics with small figures embroidered on them, high heels under them, and much make up on the faces, but nevertheless, entirely black.
Why shop at Gucci or Prada only to cover it up? Well, the expensive clothes are hidden under the robes just to be shown indoors to other women.

The men are dressed in white robes. The richer ones or the ones with higher status wear a small white scarf with black ribbons around the head, and the others wear the Arab scarf folded in a specific way. Money can buy many things, but in contrast to what many people believe, it can’t buy freedom.
Maybe this play was not called New Babylon maybe it was called Rapunsel since one of the daughters of the sitting emir was fed-up with her golden prison. In her golden cage she had everything that she could want to have, she could walk her tiger on the beach (they seriously do, check Instagram), she could buy the most expensive dresses and eat the most delicious foods, but she did not have her freedom. She decided to leave Dubai and carefully planned her escape with the help of a former French spy and her martial arts teacher and an escape boat.
Regrettably she was caught by the Dubaian commando’s of her father’s rulership. She was captured and never heard of since.
Just now as we have arrived to Iran we hear of the escape of one of the Emirs wives (yes he has many, and he has 23 children), who got scared about details she heard about the captured daughter. She fled to Kensington England and asked for asylum and is pursuing a divorce from there. Towards foreigners and workers the Emirati government is tolerant. No dress code and you can buy alcohol but only according to you wages. The more you earn the more you can buy. But clearly human rights are being violated and the world is looking away. Because Dubai has money and because the humans in this scenario are women, not men.

Although we sense the strict rules that don’t apply to us, and we experience the hierarchy that is felt when you’re dealing with a sheikh, we do enjoy the life in oblivion that everyone is living here. The beautiful lights at night, the musical fountain in Dubai mall, the mall itself and shopping at the very expensive fashion designers shops and touching the wonderful fabrics. It feels like an eternal Christmas, but then in summer. The shining pool on the roof, the carefully manicured grass next to the white beach and the clean turquoise sea. You’ re in the matrix and you don’t know any better.
The people who are from everywhere and who are always hungry for stories are really interesting to talk with. To hear the many stories of their homes and cultures. 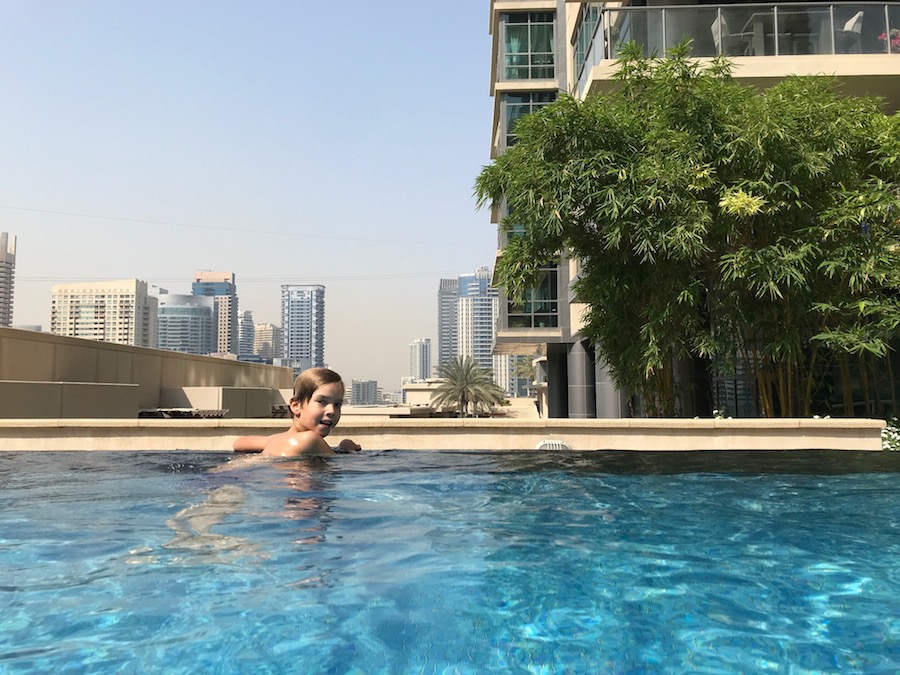 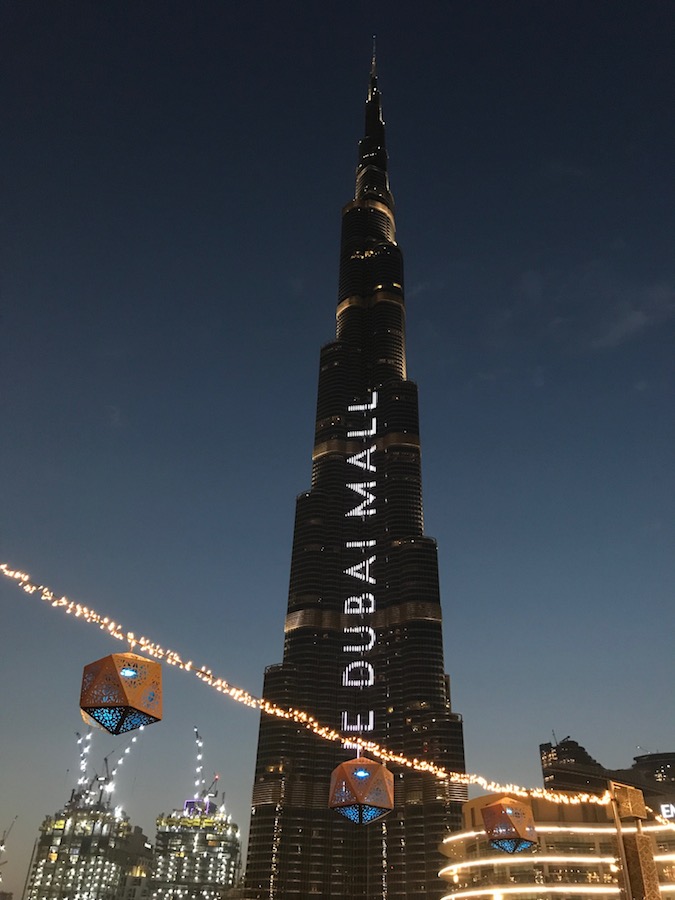 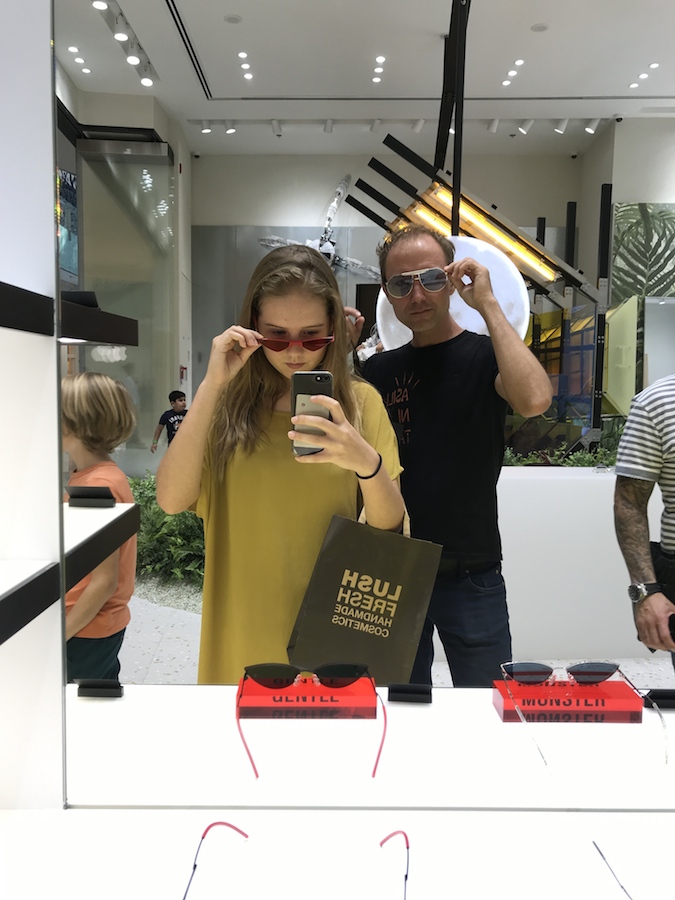 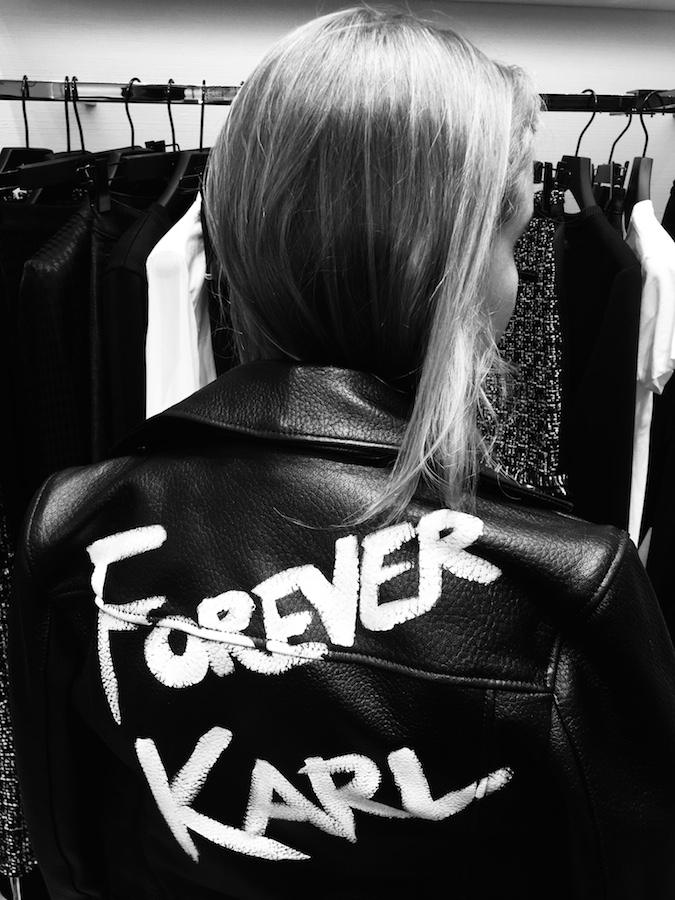 The dinner trap
One day we get a phone call of a certain man who has seen on Facebook and Instagram that we are in Dubai with our MakeFactory truck. Would we maybe be interested in a cultural dinner with one of the members of the royal family?
Well yes of course! We feel proud, we have an interesting story after all and if the sheikh would like to hear about it, he must be a nice man who loves art and travel!
The dinner is at ten and we will be picked up. Ten?!! That is when we usually go to sleep, but of course it is Ramadan and everyone sleeps during the day (the Emirati that is, the rest works) and starts to live around 8 at night when its cooled of and when they are allowed to eat again. But even the boys decide they can’t miss this chance to visit a real palace! Maybe there will be tigers on the beach.
We immediately call Boba: “This is huge” he exclaims, “I’m coming too!”.
As soon as he comes home from work a whole Cinderella scene starts: what to wear??!!  Everybody is walking like a headless chicken through the apartment. Boba and Oscar are off to the hairdressers and Ate is buying nail polish at the mall.
Finally we are presentable and nervous, when this guy shows up and picks us up in a big SUV. We are swiftly driven to the palace and brought to a sort of reception salon.
Hmmmm…. what a strange atmosphere…. is this a palace?
Scruffy chairs are placed along all the walls, piles of books and cardboard boxes in the corners. The sheikh who’s receiving us is playing chess with an old fat guy, and only shortly nods. What is this?

A group of people (from Zimbabwe we hear), also nicely dressed just like us, are being walked in by a Pilipino guy in the Emirati folklore white robe. He sits them in a circle behind us and starts to lecture them about Islam. Oh no! They silently nod politely and reply very little. When it is dinnertime we are brought to a huge table, where the group of unshaved and chubby looking men in the white dresses already occupy half of the table.
The sheikh sits across from them and we are sitting on his right side. The table is loaded, with meat mostly. But when we say that two of the kids don’t eat meat the kitchen quickly makes a pizza. Sake falls asleep behind Dienke on the fluffy huge chairs that we sit on. The sheikh is talking about his shooting championships in the Olympics. It is quiet amusing we must admit but he never once even asks a question about our project. Oscar tries to bring it to his attention, but he doesn’t seem to care. After dinner, when it is already midnight, we are summoned back into the sitting salon. While we wait for the sheikh to come and have his personal talk with us we are looking at some photo albums full of pictures of men that caught a huge white shark. Sitting on the shark, holding the shark, lying next to the shark. Poor shark.
And then the lecture begins, about why the bible contradicts itself and where exactly it contradicts itself, completely affirmed with the corresponding verses, so quickly found that it reveals the sheikhs routine regarding this matter. We do not believe in Islam nor do we believe in Christianity, so the whole talk is completely pointless to us.
Finally at 02.00 we are released. We say something about how it is very late but the sheikh replies with ‘Don’t worry, I don’t mind you keeping me up, I sleep during the day’. We are so amazed by his remark that we almost forget to keep showing a polite face.
Back home we laugh, my god have we been trapped!

Just not to end with this horrid picture here’s two pics we took in the independent studio of some young designers.
The name of a start-up fashion label, and a picture found on a big scrap board for ideas. 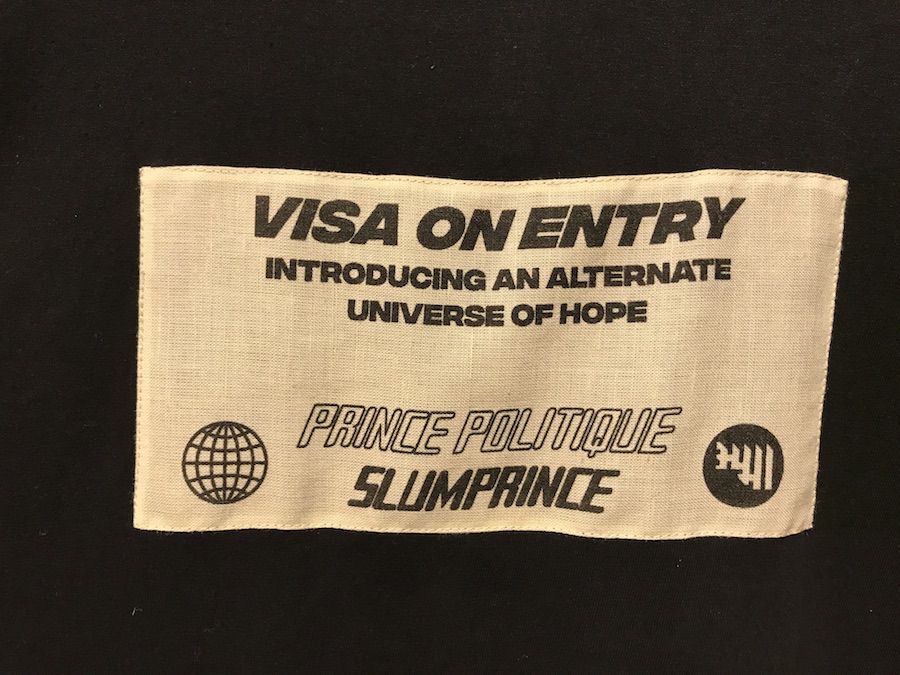 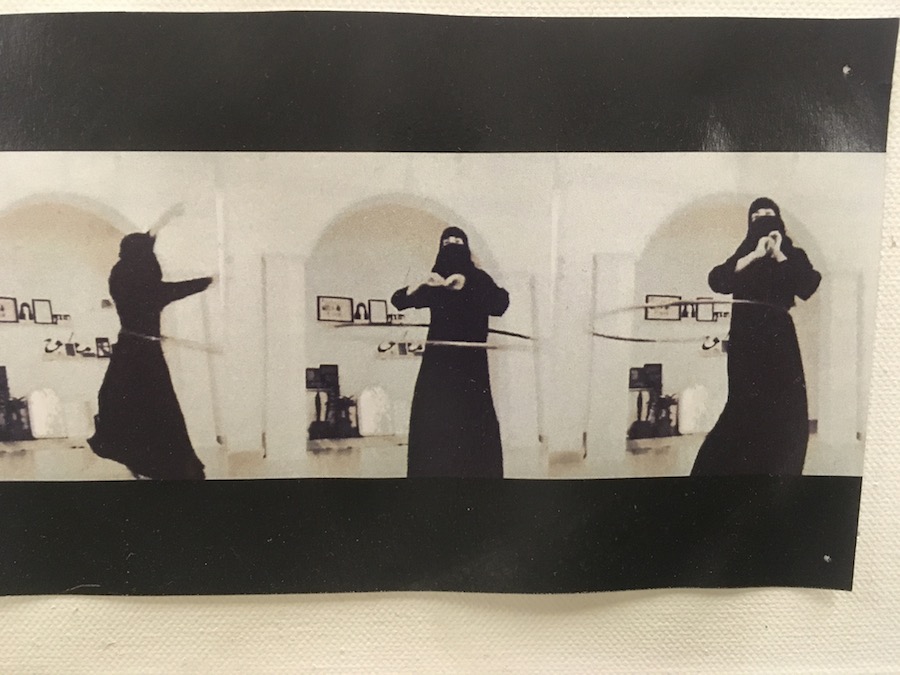