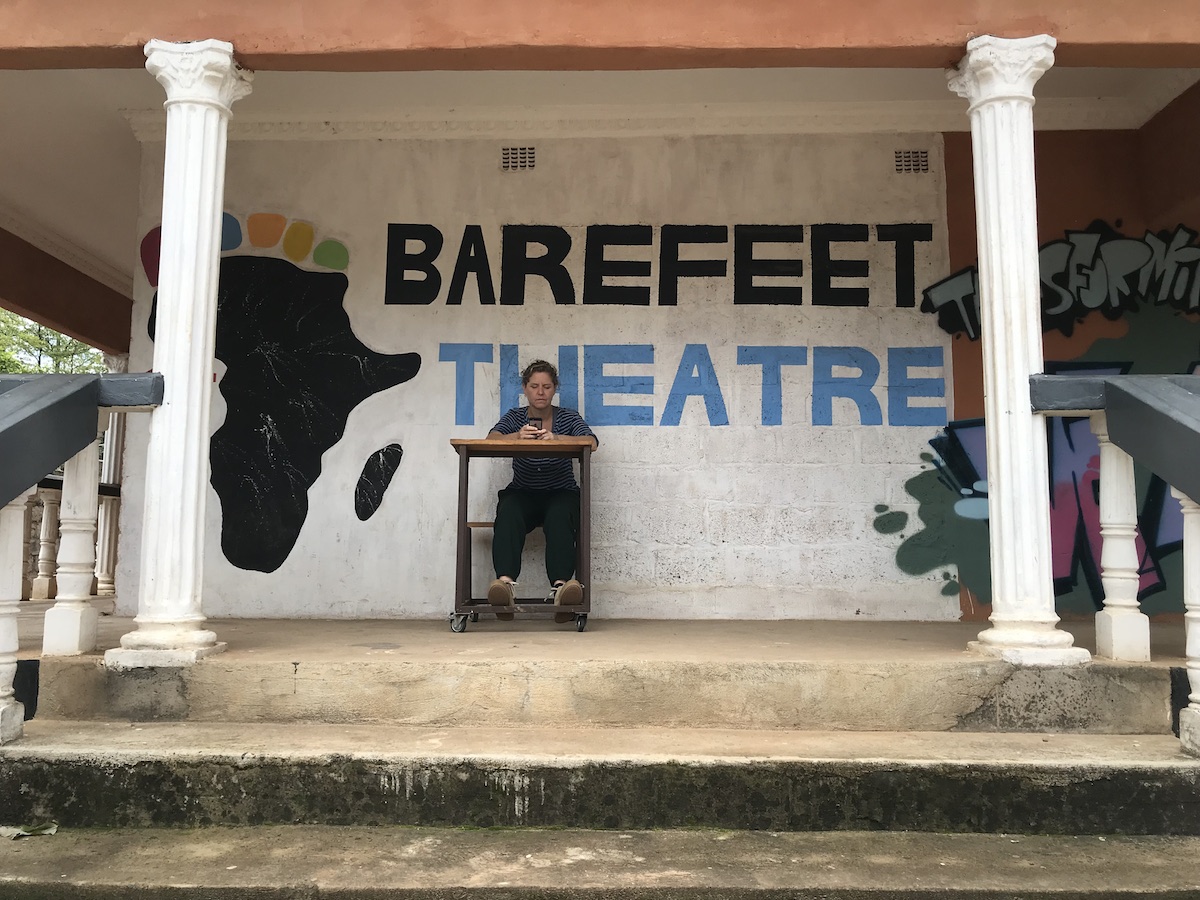 Meanwhile in the Netherlands, the high school kids are protesting against climate change and their parents are posting the whole thing proudly on Facebook and we are having a close look around us in Zambia, and we realize ourselves how much this is a problem of the richer countries in the world. Fingers are being pointed at third world countries sometimes when it comes to plastic pollution but in Zambia we can be sure that a carbon footprint is only a fraction of a Dutch one.
Right now we are working on a photo special about climate neutral production of goods here in Zambia. Soon you will find this on the website.

After meeting the fantastic team of Barefeet theatre, we decide that the best idea for a project is to work with a group of teens in Garden Compound.
Next to the work Barefeet does to get street kids back into the community, they also work on prevention. Garden Compound is one of the locations where kids in trouble are at risk of choosing a life on the streets.
Garden Compound is a ‘favela’ in the heart of Lusaka. 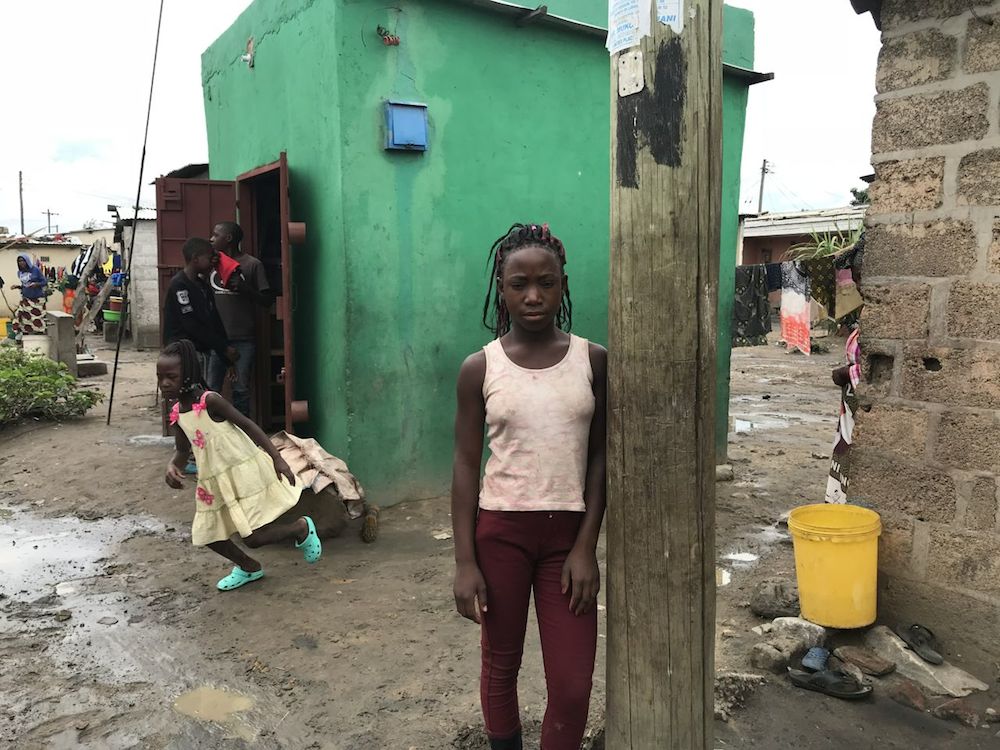 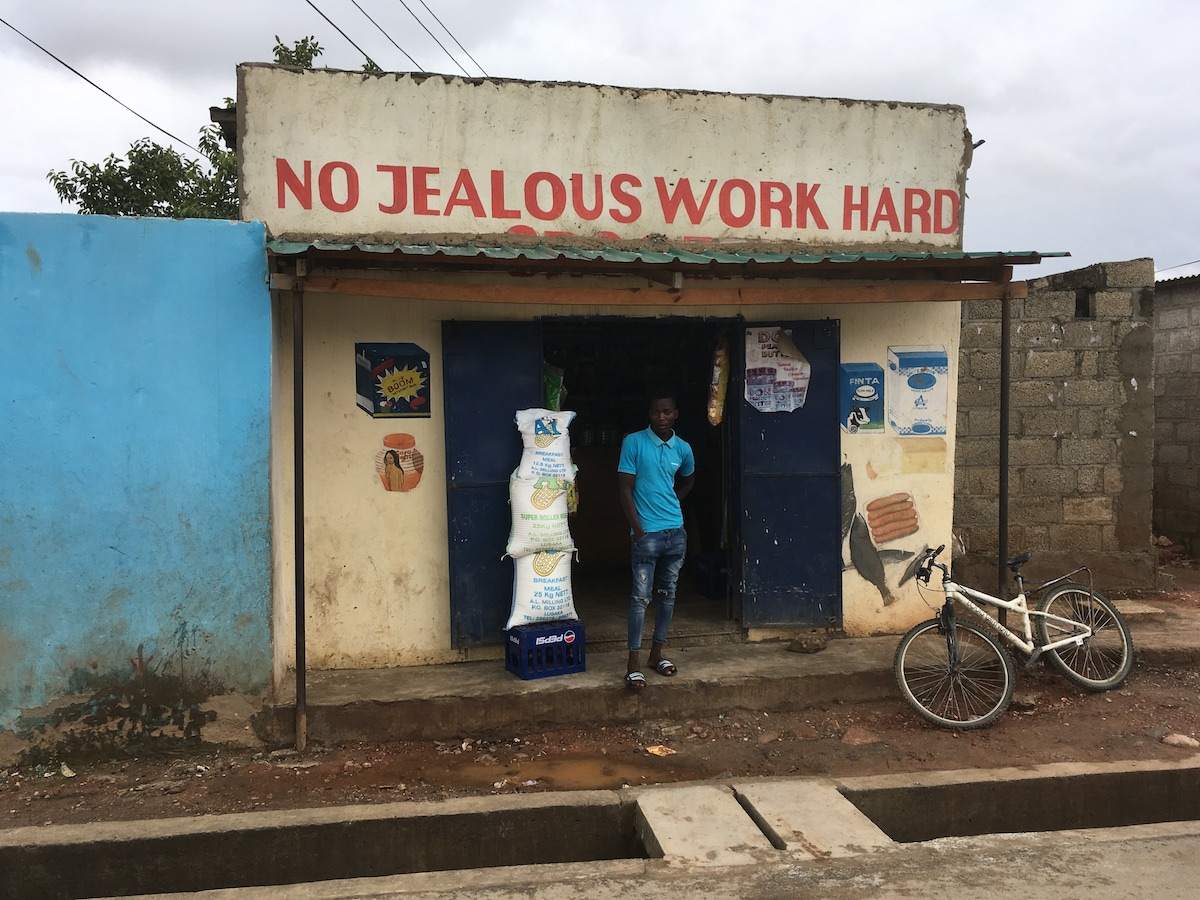 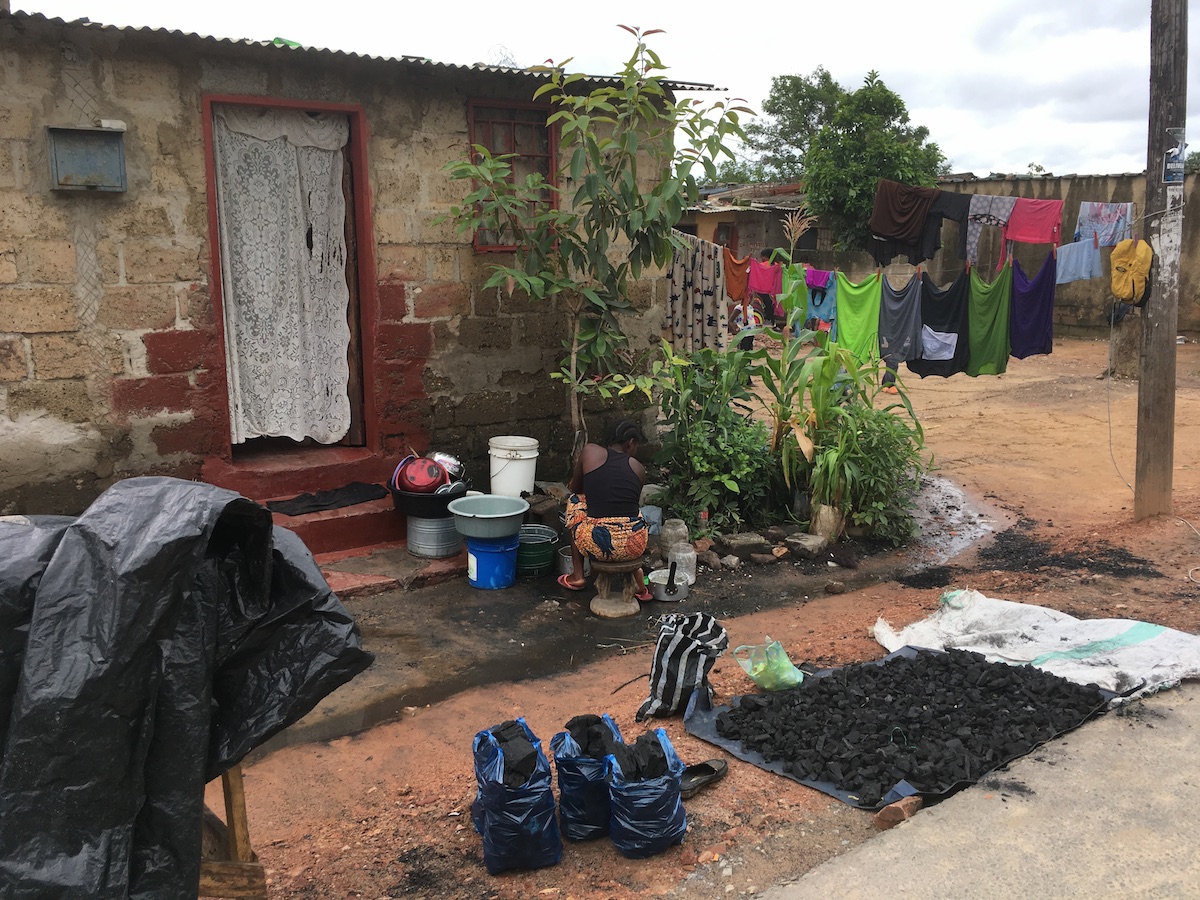 The people that live here are living a life comparable to a village life. There is no water pipe to the separate houses. Neither sewage. One shares a public toilet with a group of houses, and collects water from a shared pump or tap. A kitchen is a collection of water buckets and containers keeping the clean and the dirty dishes.
Cooking happens on a small coal stove on which you cook Nyshima, a thick maize lump with which you pick up the other foods, usually fried pumpkin leaf and meat or fish.
No cutlery is being used. The main difference compared to a village life is the absence of plastics and city dirt in the village. The village is a lot cleaner. 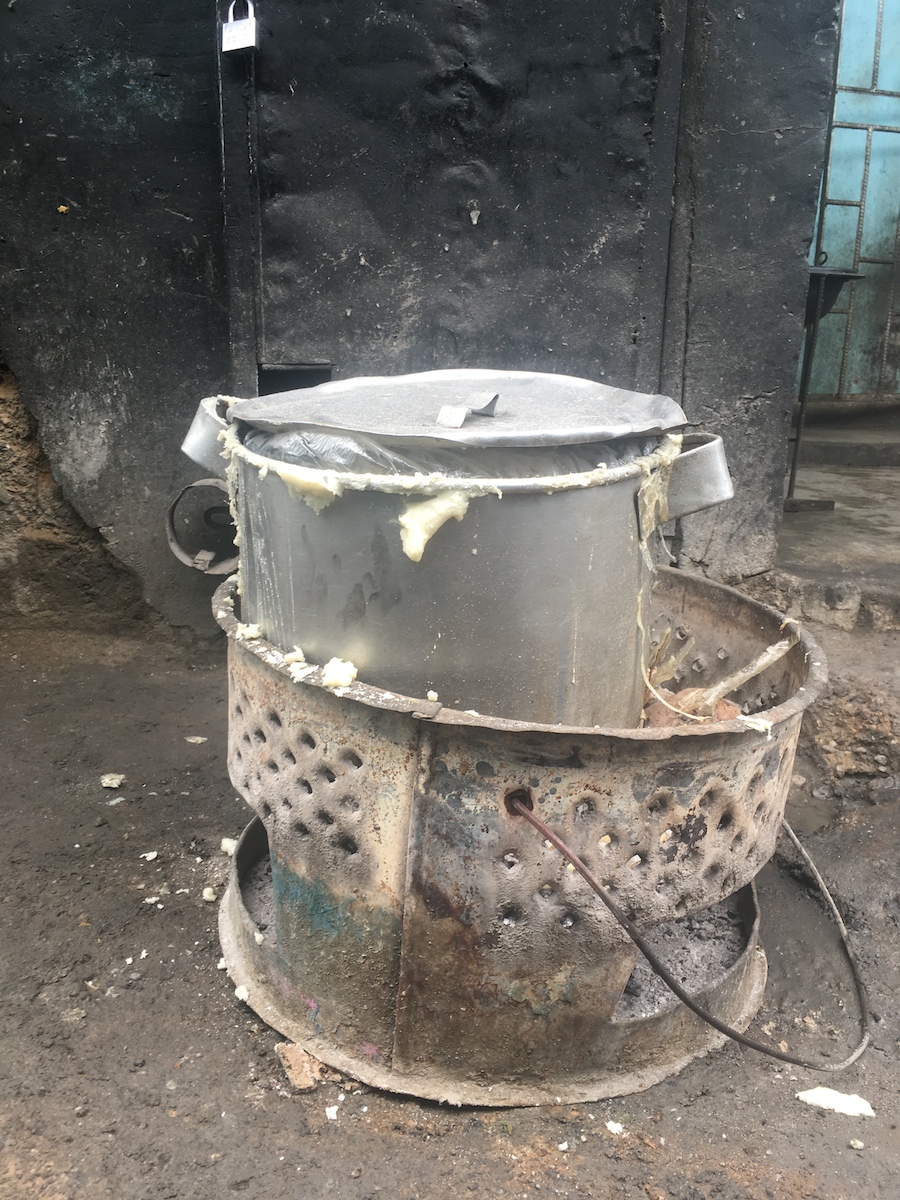 The houses are small. It is no exception if people sleep with six on one big matrass behind a curtain that divides the room. Now that it is the rainy season it can happen a few times a day that people have to run inside to stay dry. And then there is little place to take shelter.
On the edge of the neighbourhood is a library. One of the very few indoor public locations to go to when it rains.
So when a pour-down starts many kids go there. There are quite some books in the library but they are being used by many many children. Around 300 children visit the library every day.
The books are all in English. In Zambia 7 languages have been appointed to be an official language of the 70 that are being spoken. English is the first national language but in Lusaka most people speak Bemba or Nyanja. The many languages in the country are one of the reasons that school books are being made in English. The content of the lesson books has been mostly adjusted to a Zambian life, but the storybooks have not. They tell stories about English lives. Lives that a Zambian child may not relate to at all. Some of the books even have a truly colonial content.
In Zambia, TV channels also show a lot of foreign content. Images of lives far away and not representing an average Zambian life at all.

As we arrive at Barefeet and meet with the team some of the team members are busy acting for a new soap series.
A new Zambian channel has just been launched: “Zambezi Magic”. They want to show only Zambian content. Suddenly I realize how much we are being bombarded also in the Netherlands by American content on our TV. Netflix, Nickelodeon, Disney, Cartoon Network and so on. Wouldn’t it be great if we got to see Zambian soaps or Indian and Chinese instead? Why not?
We are starting to believe American life is the same as our culture, but it is not, we have just been adapting to it slowly without noticing. 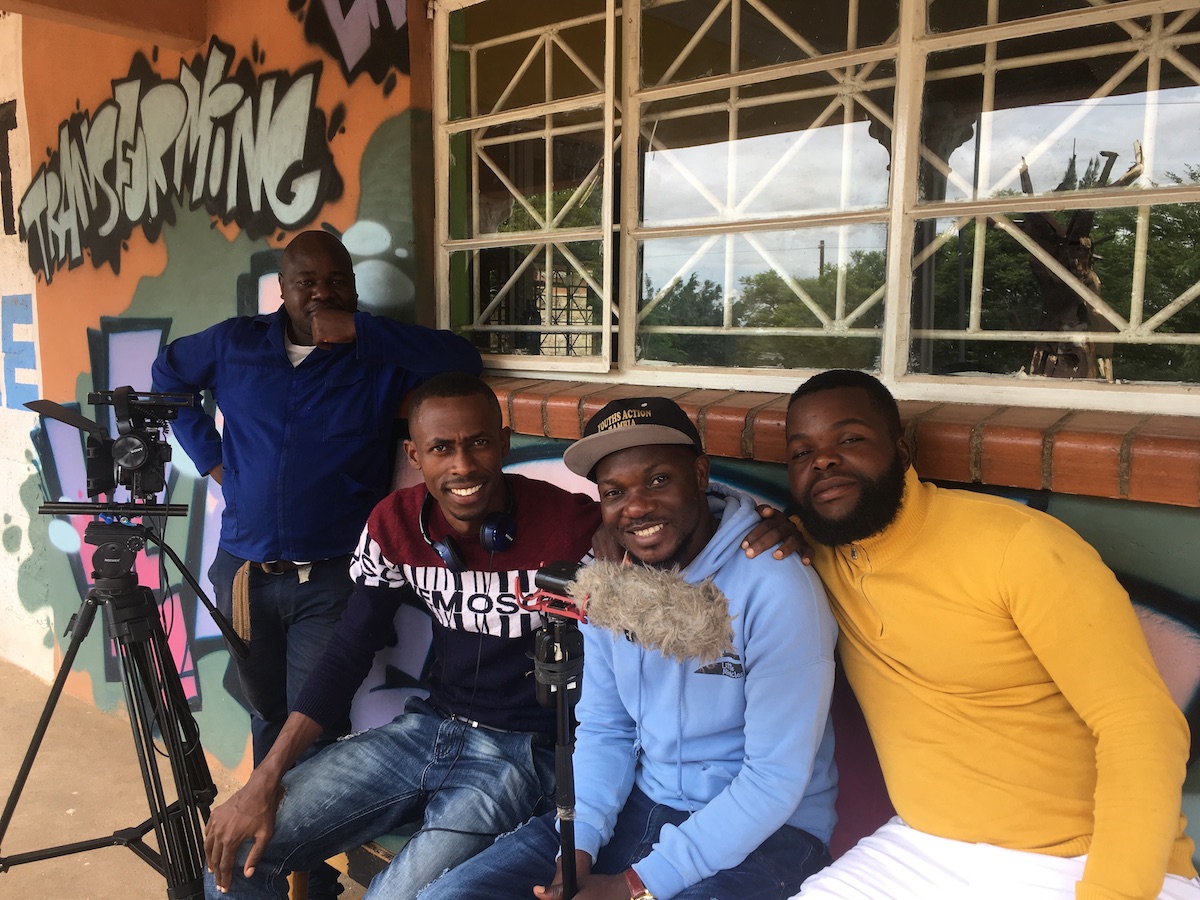 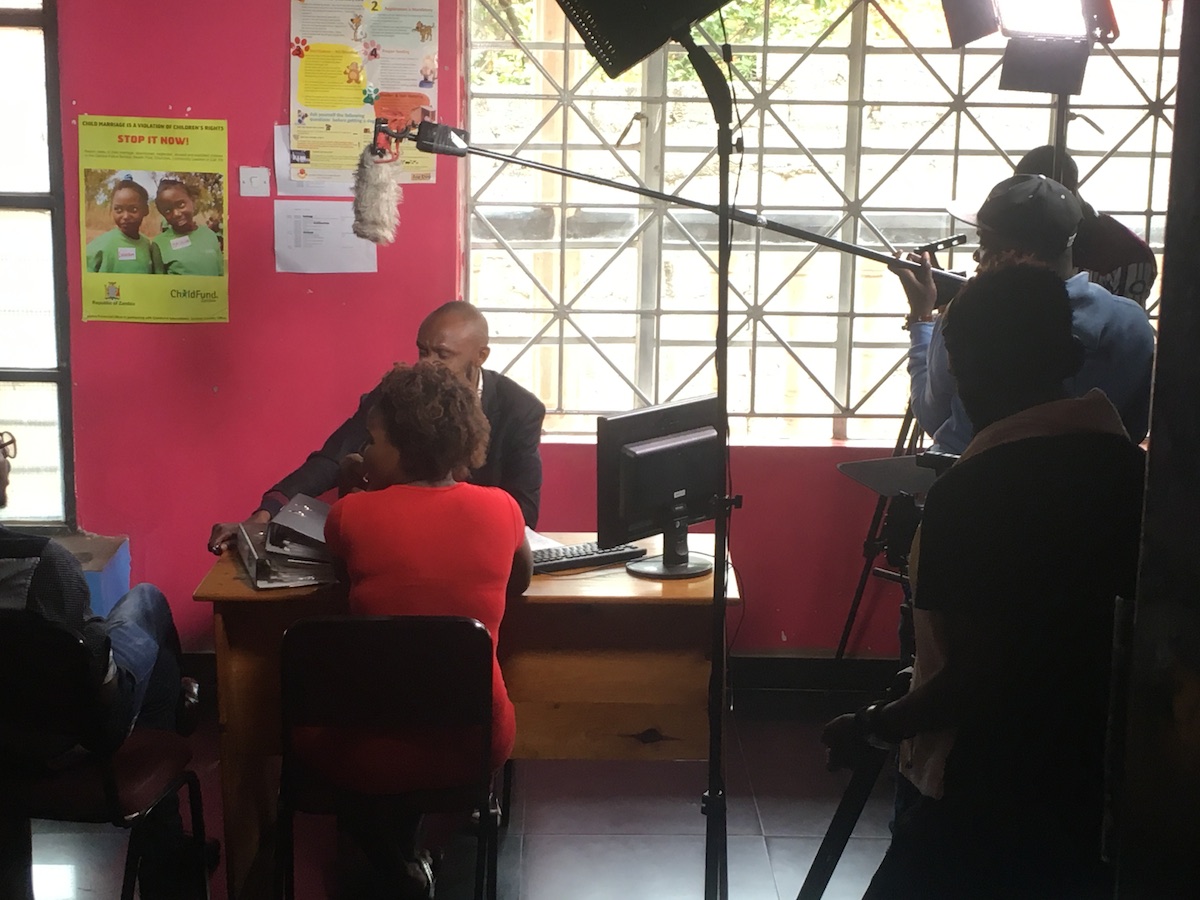 After seeing the books at the library and the huge number of children that have to share them, we come up with the idea of making a book. A book that is especially about the life in Garden Compound. That tells the stories of local heroes and local history. We are sure that will inspire kids and convince them that their lives are interesting to read about.
Barefeet has a Children’s Council. A group of youths who are trained to educate their peers about life topics such as aids, early pregnancies and domestic violence.
They do this by using storytelling, workshops and theatre practice.
Three students from this group volunteer to become our solid research team. Next to that we have an arts and drawing team. Those are the students who meet every week at the library for art classes. And we have a team of flexible people that drops in whenever they can.

From our Magirus truck we start to work. Our Mobile Working Space in full action!
As a micro cultural centre for the many children who come to draw every day and as a shag from which the team conspires our plans. 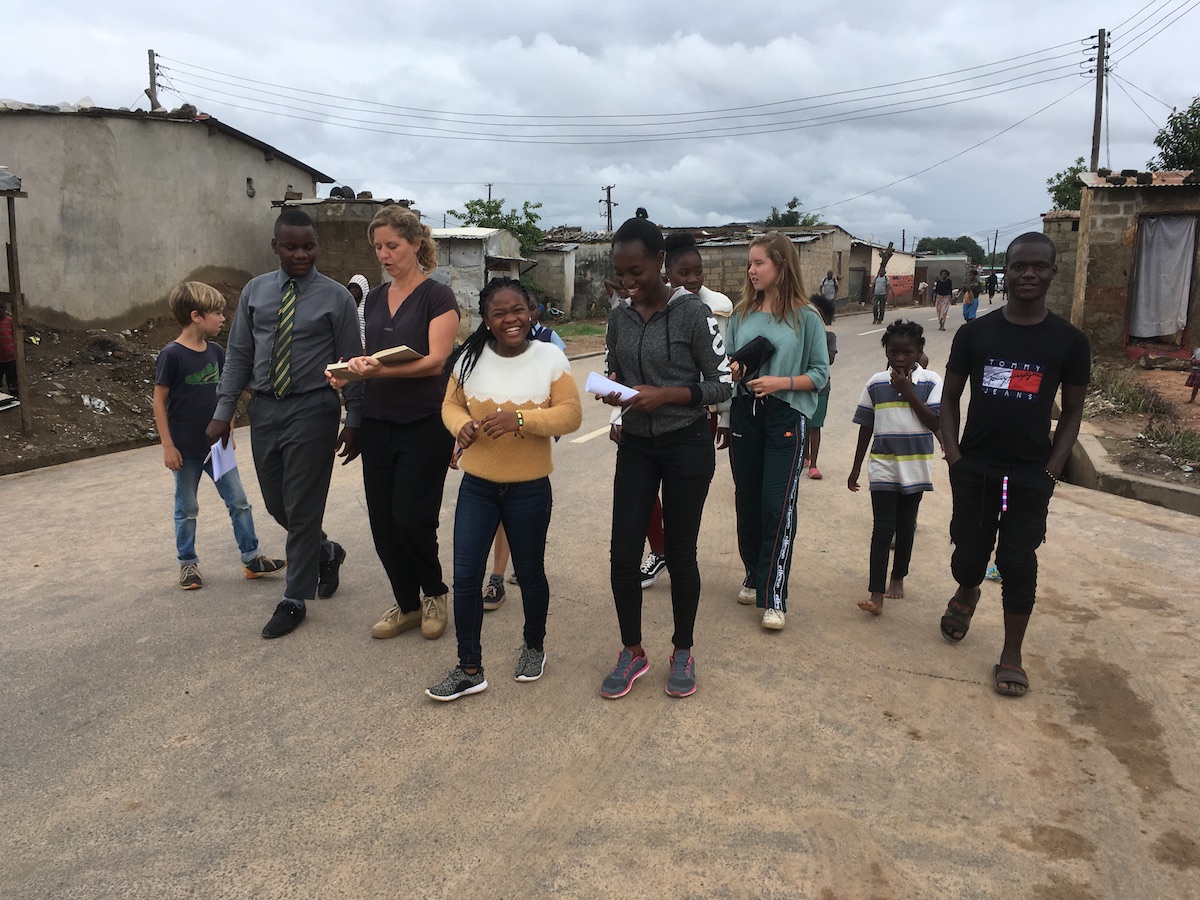 The team on its way collecting stories. 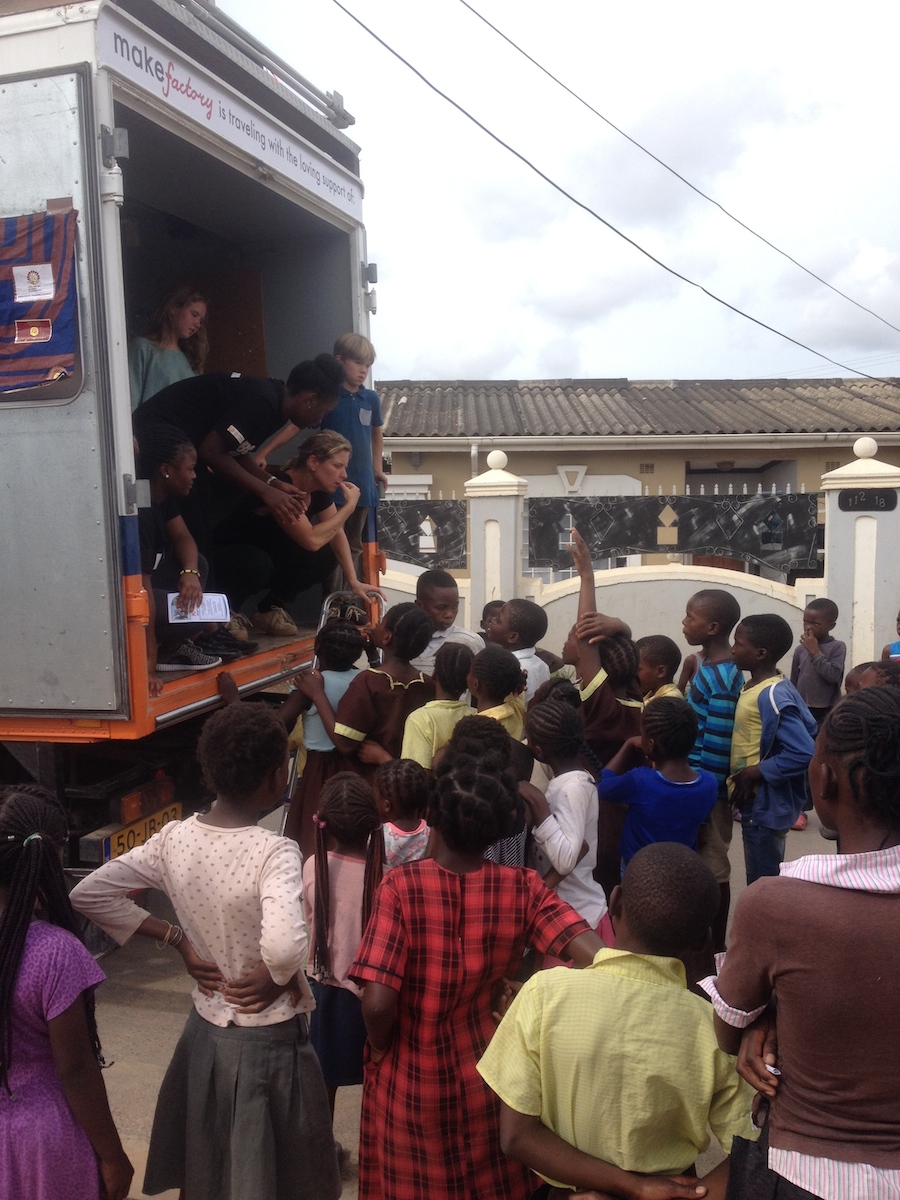 For three weeks we intensively research the neighbourhood to harvest urban myths and stories. We park our Mobile Making Space everyday in front of Kafwa, an independent school. Because we operate from the same location all the people know us after a few days, and when the Magirus turns around the corner the children already start running towards us to come and tell us stories or to make drawings. Pencils and especially coloured pencils are not something that people own for themselves.
It is a complicated job to take care that all the enthusiastic kids get their turn. But luckily this is one of the Children’s Council’s specialties. 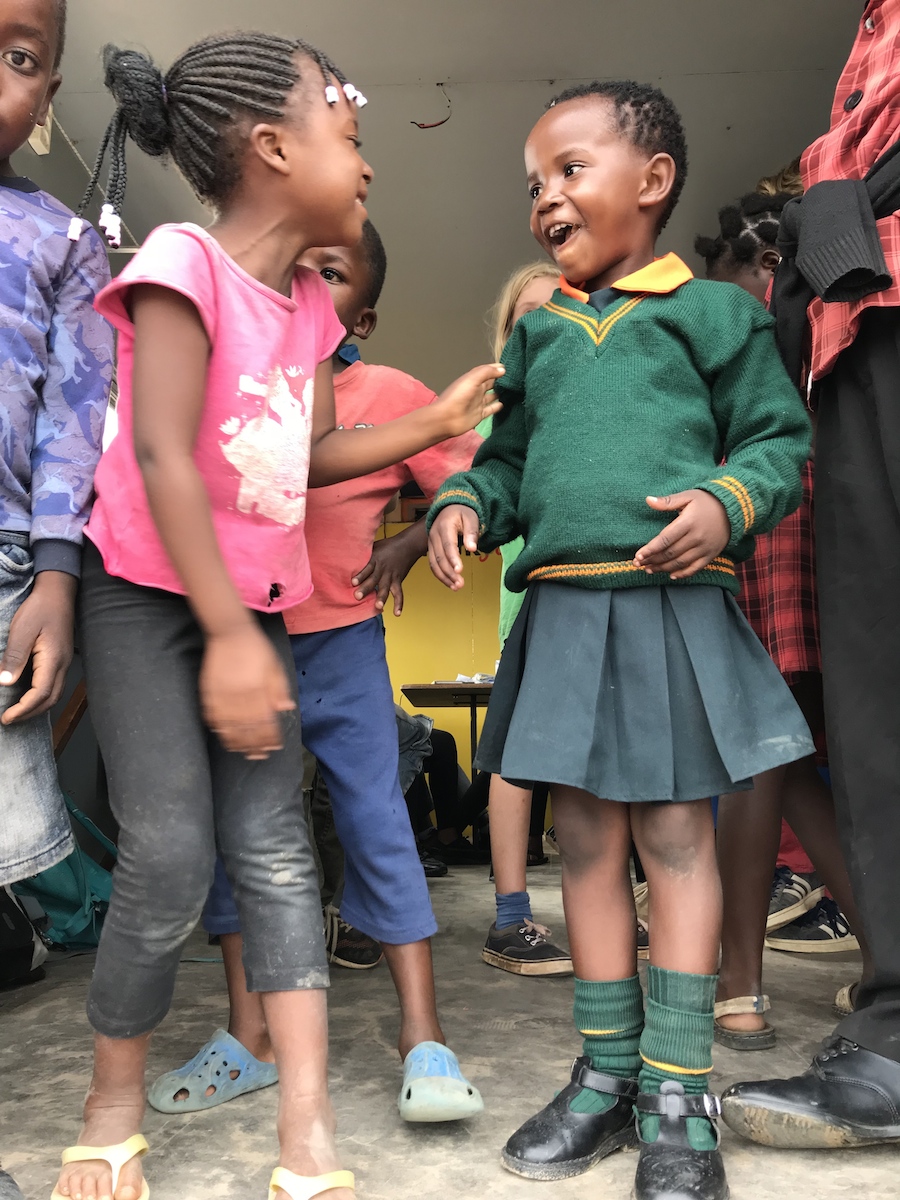 We discover very divergent stories about Garden Compound. Dramatic ones, humoristic ones, remarkable ones, and also we discover that Garden Compound’s history shows a very self-sustaining and independent soul. An almost anarchistic atmosphere. The prove is shown in the existence of the many self set up initiatives. Kafwa itself is an example. A school providing holistic education that was established especially to help out kids who are not accepted in a governmental school, or who can’t afford one. Because in Zambia school is not mandatory, but just a right. That means that if parents can’t afford to have their children follow education, they are allowed to keep them at home.
Children also begin much later or sometimes earlier with school, depending on the parents’ working situation. So sometimes kids that are in the same grade can differ four years in age. 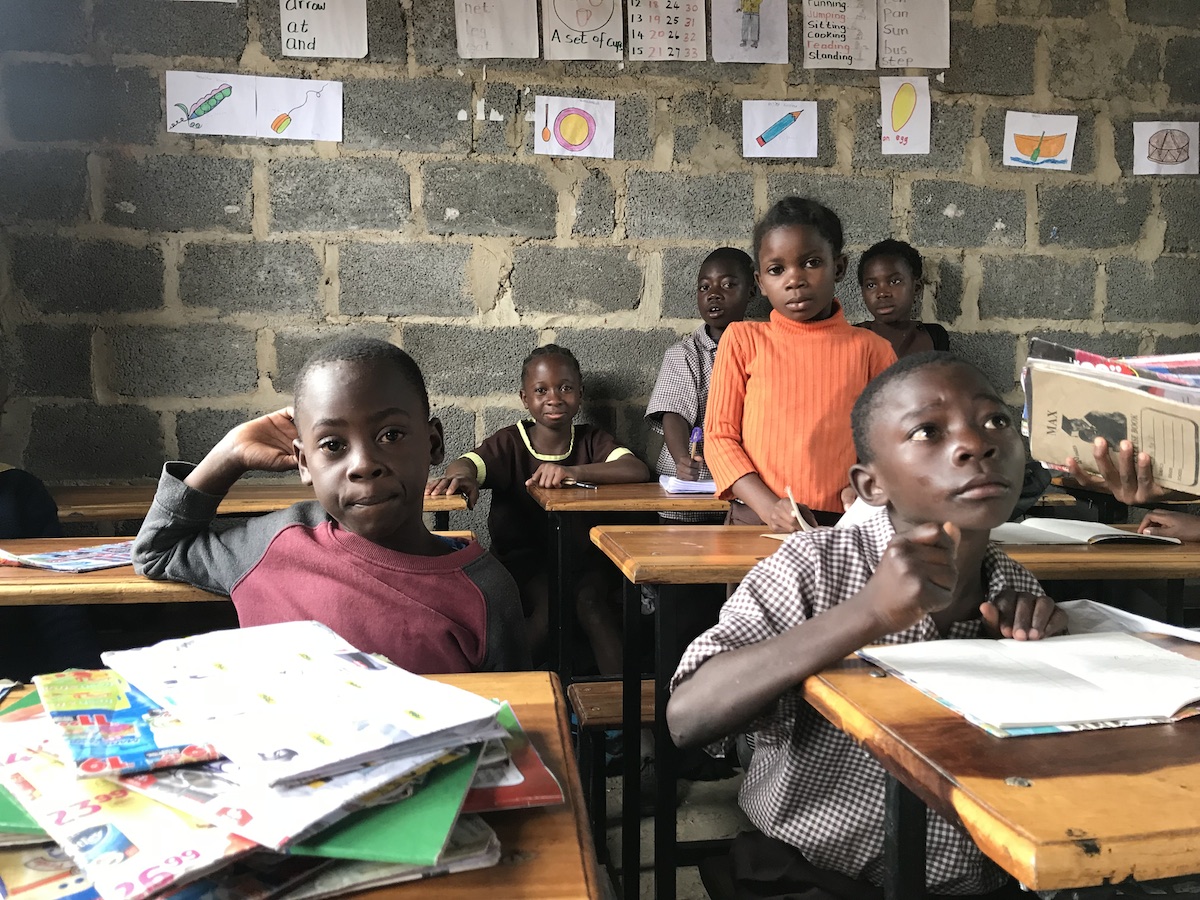 The kids that can go to school are very motivated. On one day one of the teachers of Kafwa went to his other job (he was also a part-time electrician) and left his class without a teacher. We took over his job and started teaching them first about the Netherlands, then we taught them some French on their request, and eventually some Japanese. Everything was written down and listened to carefully!

After four weeks of research, drawing, collecting, writing and designing, we have to get the book printed pronto! Because the next day we have agreed to present the book at Kafwa Drop-Inn Centre and invited a lot of people. After sitting at the print shop the whole day and watching the process closely, the book is finished!
The result is a very colourful magazine-like book with a hand-drawn map by Juma, drawings of all the kids in the neighbourhood, stories of local heroes and drama’s, and urban legends of crocodiles that seem to live in the sewage. The last story appears to be true in the second workweek, because on one night we are bombarded with messages from the team that a real big crocodile was caught!
Barefeet’s dance and acrobatics team is present to support the presentation. As soon as the drummers begin to play the people are streaming into the courtyard. John and Thomas, the acrobats, provoke a lot of cheering and clapping. Traditional dances are being performed and all the people join in the singing. If we show the crowd the book for the first time all the kids are cheering and applauding as soon as they recognise themselves, or the work they made. We show them the pages walking past around the circle and holding up the pages. 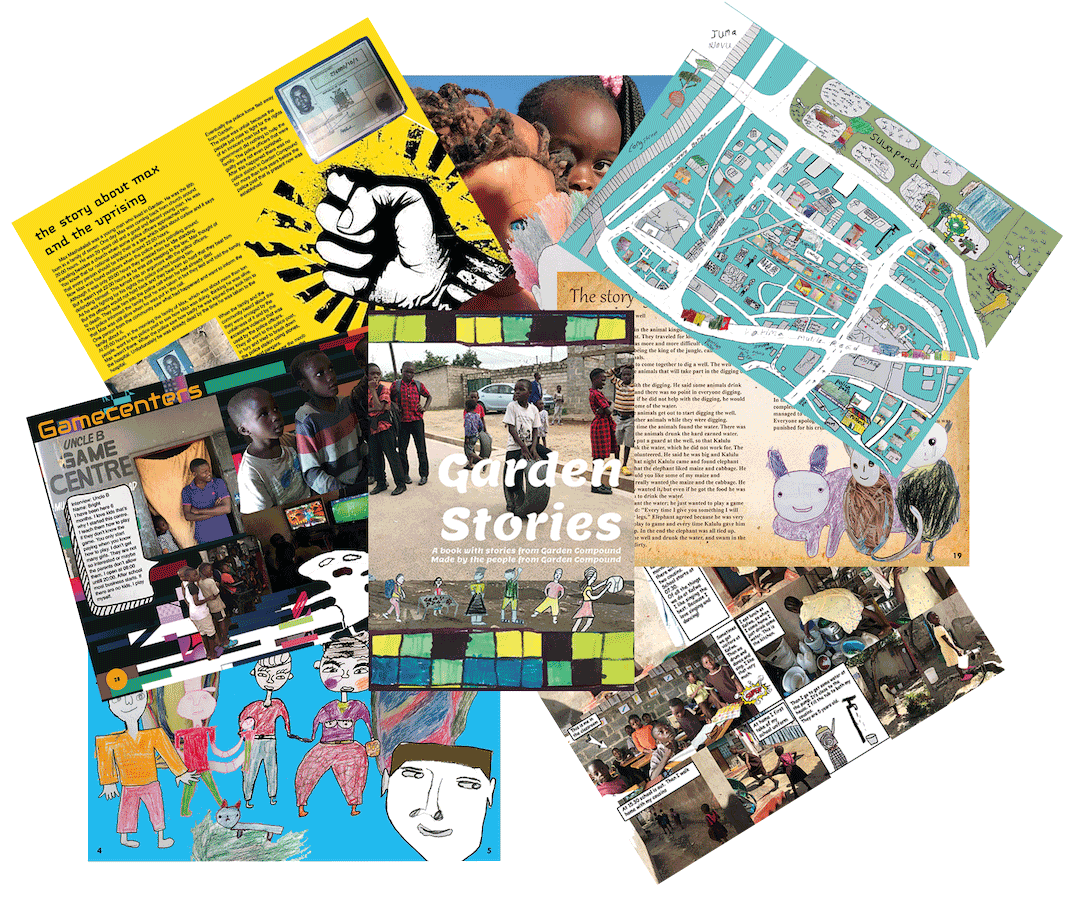 The kids are proud, the team that we worked with so closely is happy. They enjoyed discovering things about their neighbourhood. We have learned a lot too. About globalization from another perspective, about formalities and informalities, and about how art works between those things. 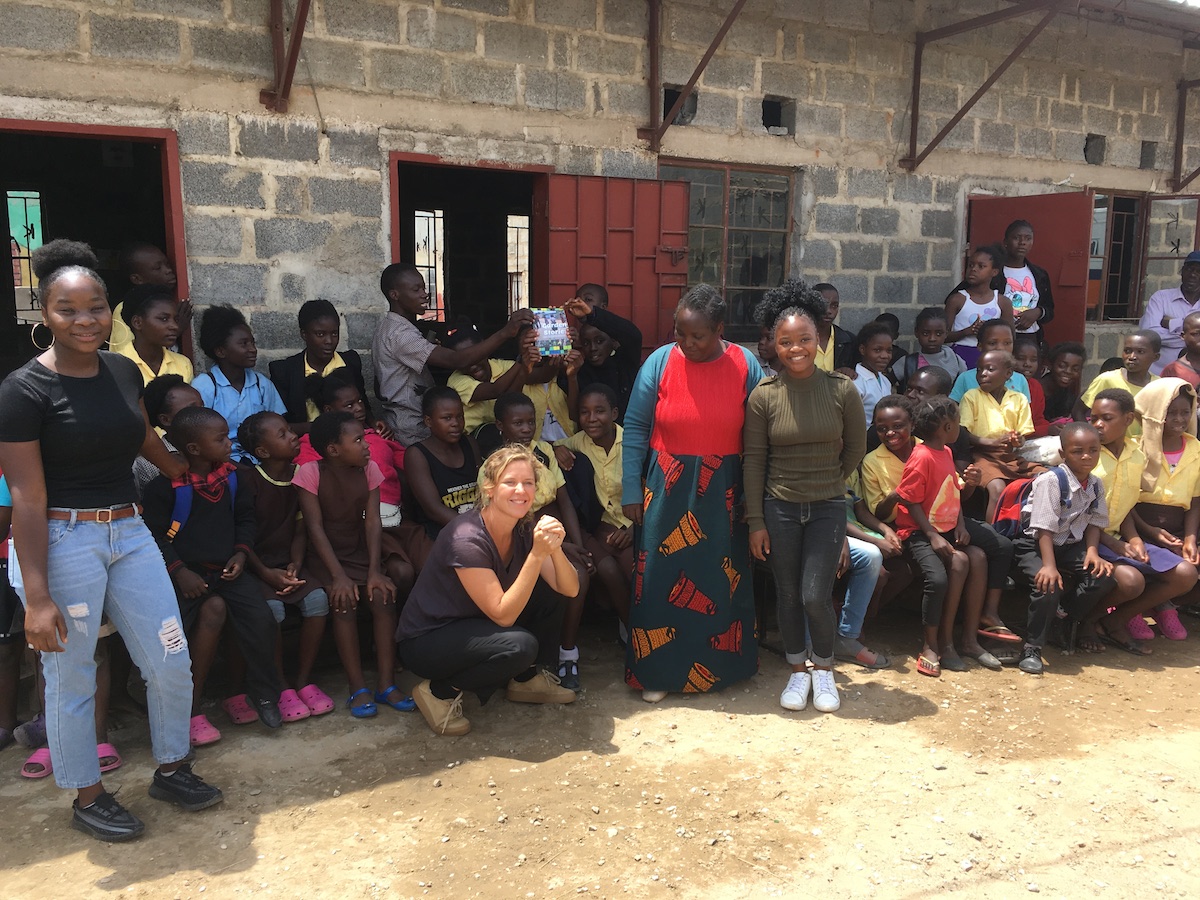 The weekend before we leave is busy. On Thursday the Barefeet team needs to do a performance in Ndola. An American organization that has set up a school there has brought Barefeeet to America before, and now they are keeping their promise to do a performance at the school in return. Mees and Sake appear in the show! 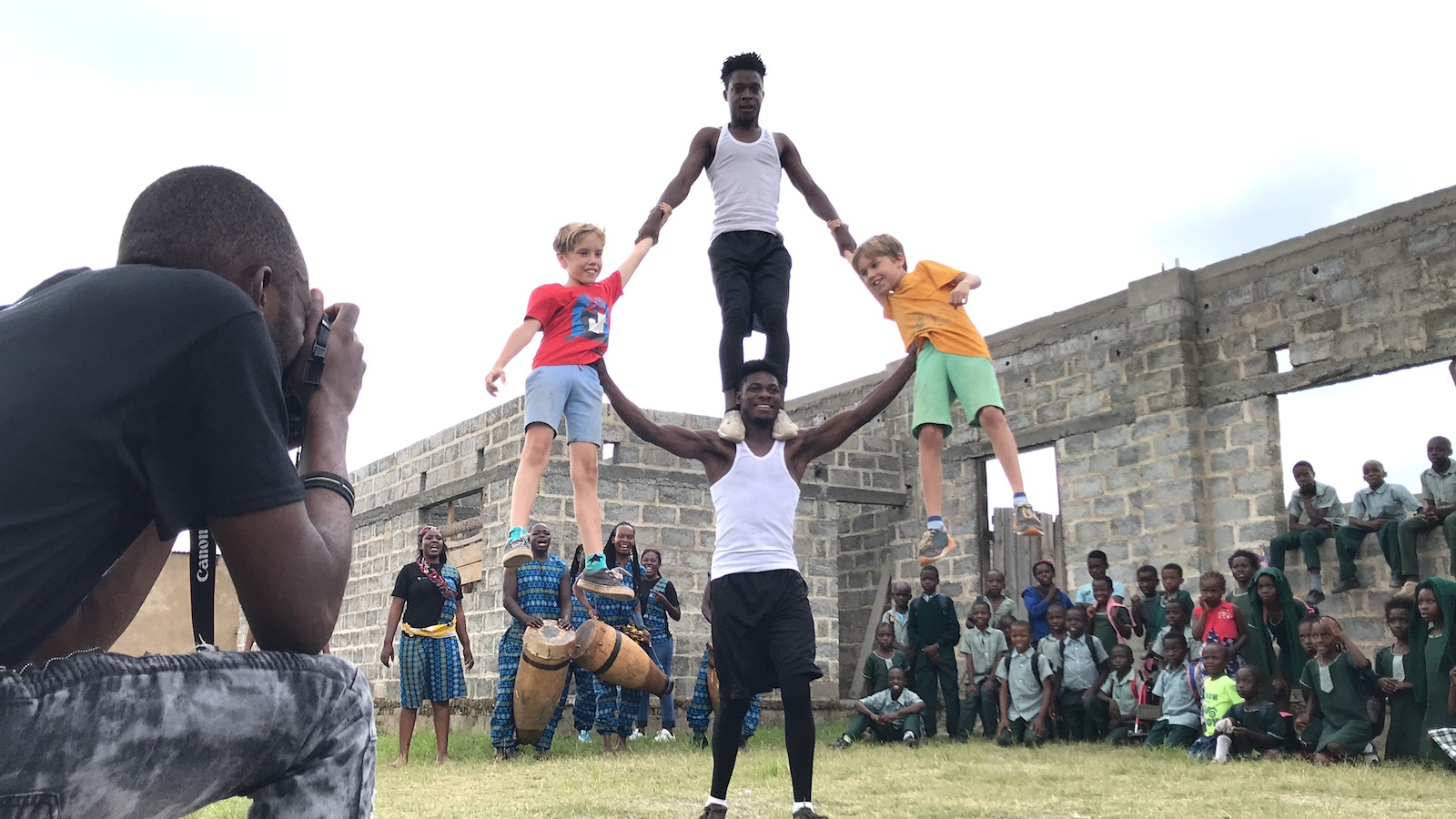 Regrettably our driver needs to drive almost 16 hours on that day, while the next day the MakeFactory village visit is planned. Read more about the village visit here.

And finaly dear people, and especially all of our sponsors who have contributed to keep our mobile making space rolling, and who are not on Facebook, we owed you this picture!
If you also want your name on the Magirus, it is still possible via this link. 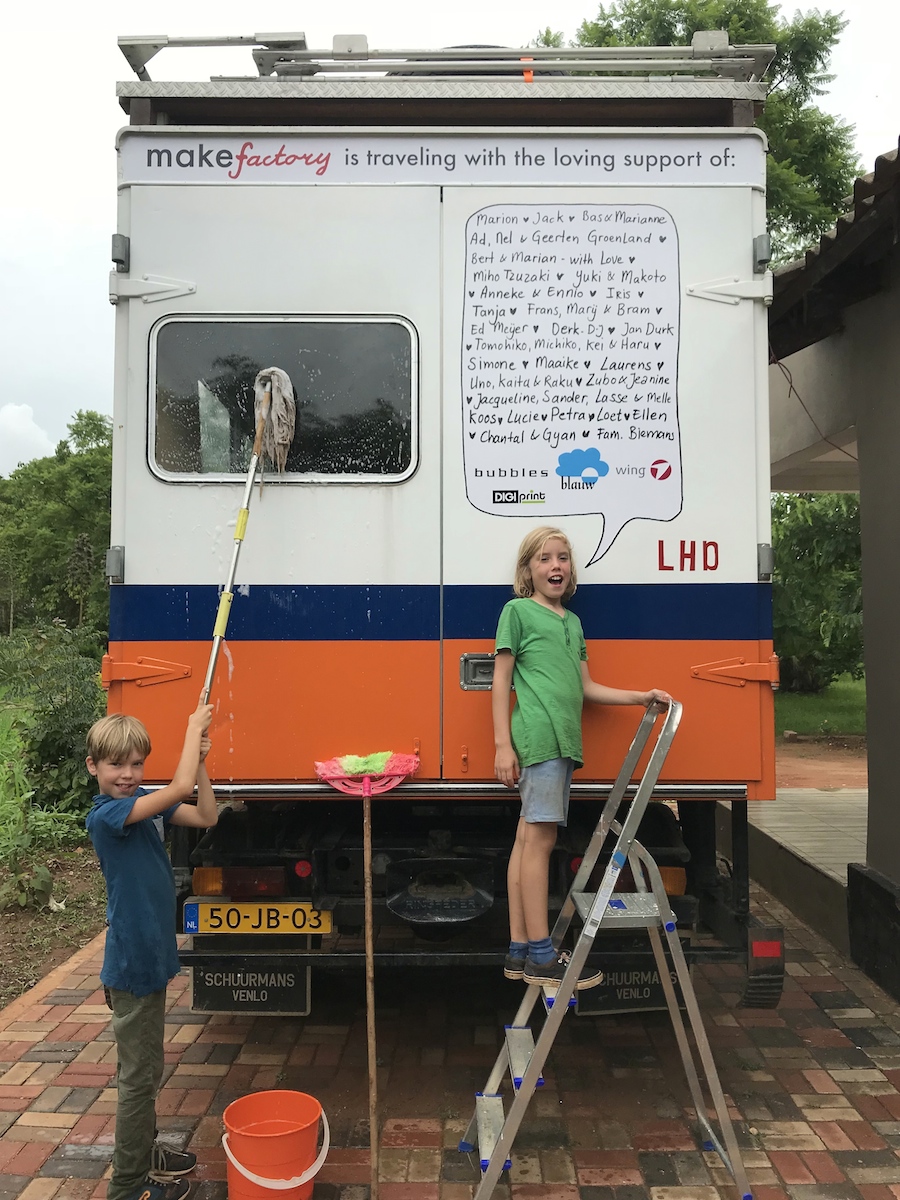