We had nothing prepared in advance when we arrived in Namibia. It wasn’t initially one of our working locations, but it appeared because our mobile working place needed to be shipped to Walvisbay. Although we started at first by initiating something on the spot, the visit to Namibia eventually was all about getting our Magirus fit and running and about wild animals!
Before we left the Netherlands we did get some names and contacts in Namibia from a Dutch friend, of which one was Kirsten. She came to pick us up from the airport and we were invited to spent our first night in her house in the desert just outside of Windhoek. A very nice welcome. 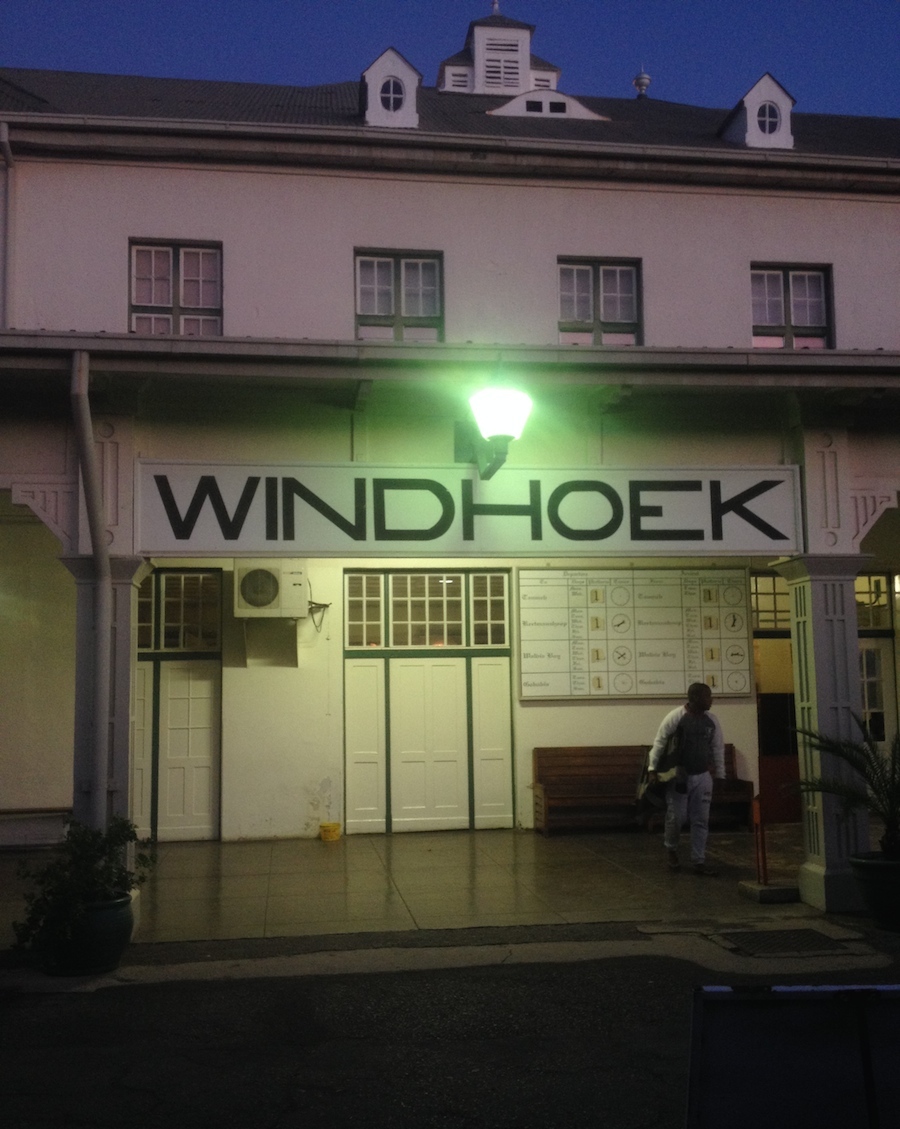 We notice quickly that something isn’t right about Namibia. All the people seem to be either angry or scared. But we want to give it the benefit of the doubt, it could just be our feeling that need to adjust to a new situation. We should give ourselves at least a few days to get the ‘feel’ about what’s going on. Although the first impression also gives important information that you might consider to be ‘normal’ and unnoticeable even after a few days. It’s always interesting to compare the different ways of welcoming at the border when you enter a country. So far: Senegal: lazy and uninterested, Ethiopia: a super happy welcome, Namibia: a barking dictator. Does it say something about the general atmosphere in a country?
Julus asked when we landed in Ethiopia: “Are there any countries where the people are just happier then in other countries? Like where the average happiness is just higher?” He implied that it would not have to do anything with the present situation, but more as if it could be a sort of DNA of the people.
When I (Dienke) studied my master at ArtEZ, we had to conduct a journalistic mini research. Our topic was the so called ‘world happiness report’. Our research group doubted the outcomes of the report since there were an unequal amount of questions about possession. ‘Do you have a washing machine, a TV, a laptop, a telephone?’ etc. We were wondering if you can measure happiness by possession.
For example I have noticed that in places where people really had little to possess (for example no fridge, no TV, no running water), they kept the little things they did have very neatly. It seemed that the care that people show for their belongings or direct surrounding could also be a factor for happiness measurements. Plus of course, there are many examples of unhappy people that have a lot of possessions. In the world happiness report that we examined, Togo was the lowest scoring country on the list. We called the embassy of Togo to ask them why the people of Togo had filled out the assessment so negatively. Maybe when people fill out an assessment about happiness in their country, they simultaneously form a general opinion about their shared satisfaction about the country. And it seems to be adjusted to one another.
In the Netherlands all the people are always complaining about everything, there’s never anything good enough and still The Netherlands always ends up really high on the happiness list. How’s that possible?
In Namibia everyone seemed scared or too alert. No one seems to trust each other. Around the houses people built tall walls, and on top of them barbed wire, glass or even electric fences. Prosperity is clearly divided in two.
Although apartheid has been banned years ago things have surely not evened out yet. All the white people are owners of companies, live on farms and usually also own a house in town. They are the employers and not the employees. Many black people make an angry or arrogant impression, if not racist towards white visitors. You can feel that atmosphere everywhere. Besides that, the country looks too clean, too empty and too prosperous even though it isn’t in real.
Kirsten, who picked us up that first day, said that people call Namibia ‘Africa light’, suitable for first time visitors to the continent.
Now we understand she was speaking about the level of comfort. Everything works and is well organized. Showers and toilets are always clean. But we just found Namibia a very complicated social emotional exercise. We would rather say ‘Africa extra heavy’. 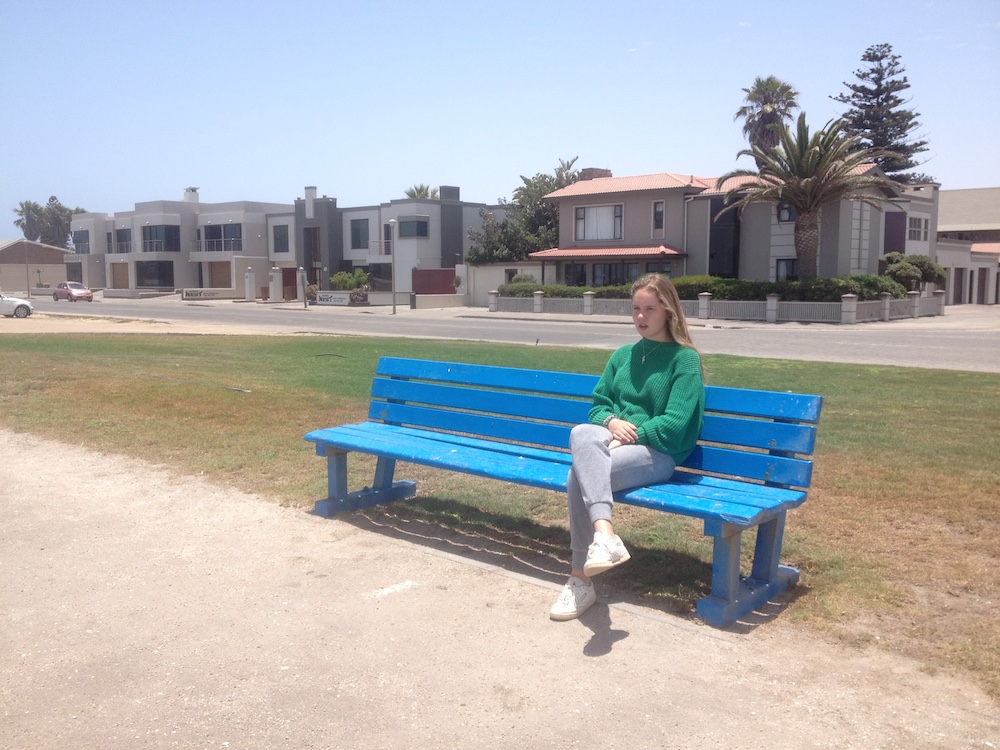 In Namibia, it turns out, the holidays have already started. The new school year starts in January, so their long break is in December. One of the contacts that we had was a teacher at the University of the Arts. But the University has already closed and the students have gone home. So there is nothing to do there. When we find out, that’s when we decide to spent our time on getting the truck up and running and to see as many animals as possible.
That’s why most people go to Namibia, for its animals. Some people come to hunt, not nice. But luckily also the hunting is bound to very strict regulations. And most of the tourists just come to see the animals alive.

We pick up the Magirus from the harbor in Walvisbay and drive it back to Windhoek. Along the way we get stuck in the sand, and because it is already dawning we decide to sleep where we are. Also we have been warned not to leave your vehicle at night, since there might be wild animals out hunting. How great we are completely self supporting! The next morning we get out with the help of some people who are passing by. 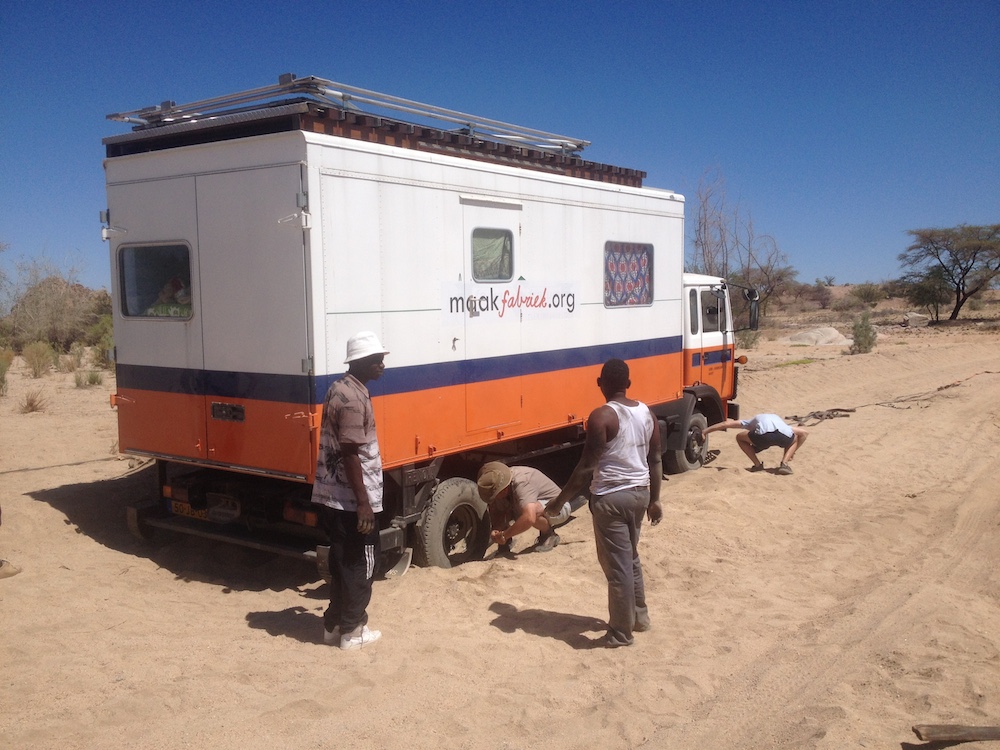 In Windhoek the Magirus spends several days at the grounds of the garage. There is a great and very friendly mechanic working on our truck who enjoys very much to teach us everything about the engine and how we are supposed to maintain the basics. 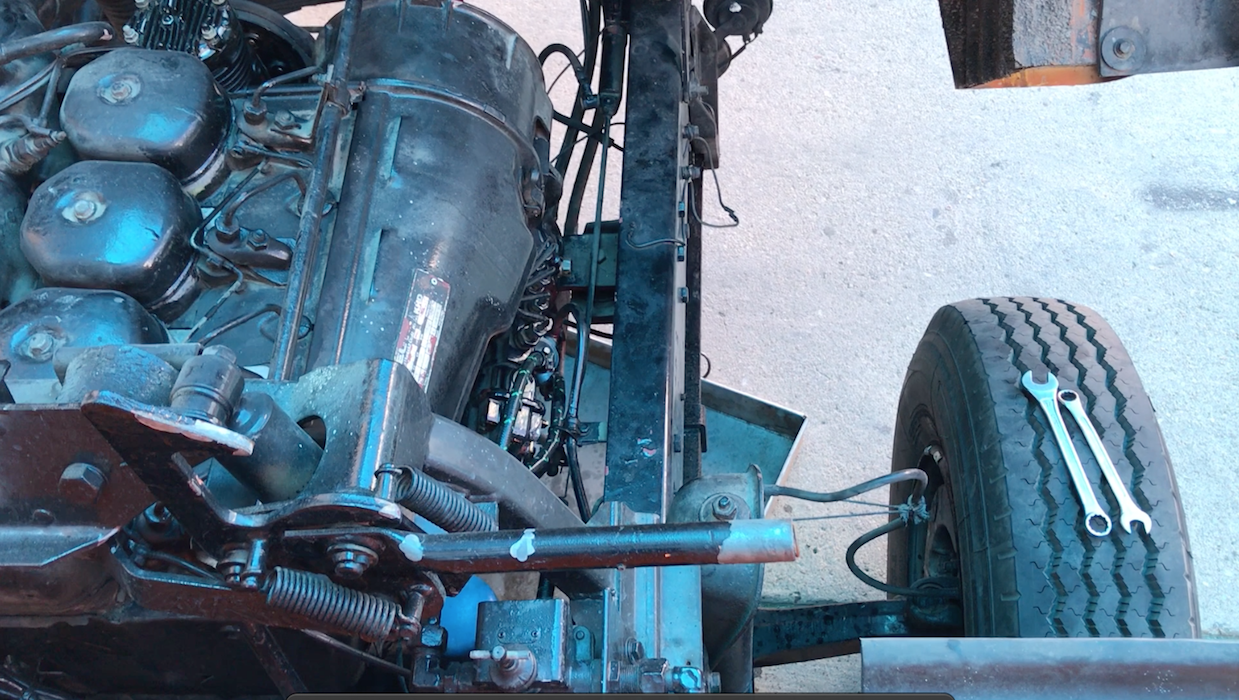 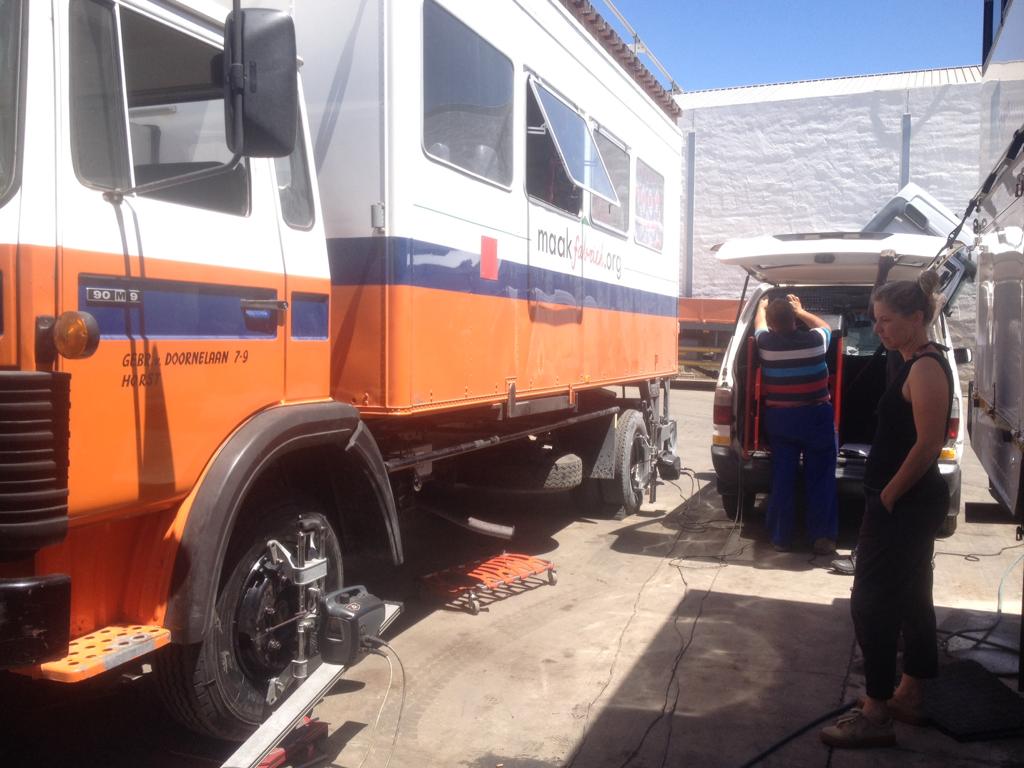 After spending ten days in Windhoek, mainly filled with truck repairs, we depart in the direction of Zambia. In between, we stop at the Waterberg plateau and visit Etosha National Park, to spot some wild animals. If you ever decide to visit Namibia, we can promise you visiting a wild park isn’t even necessary. On our way there we have already encountered giraffes, baboons, zebra’s, kudus and wardhogs.
It’s amazing and miraculous that these large and impressive animals are living in this barren dryness and heat. 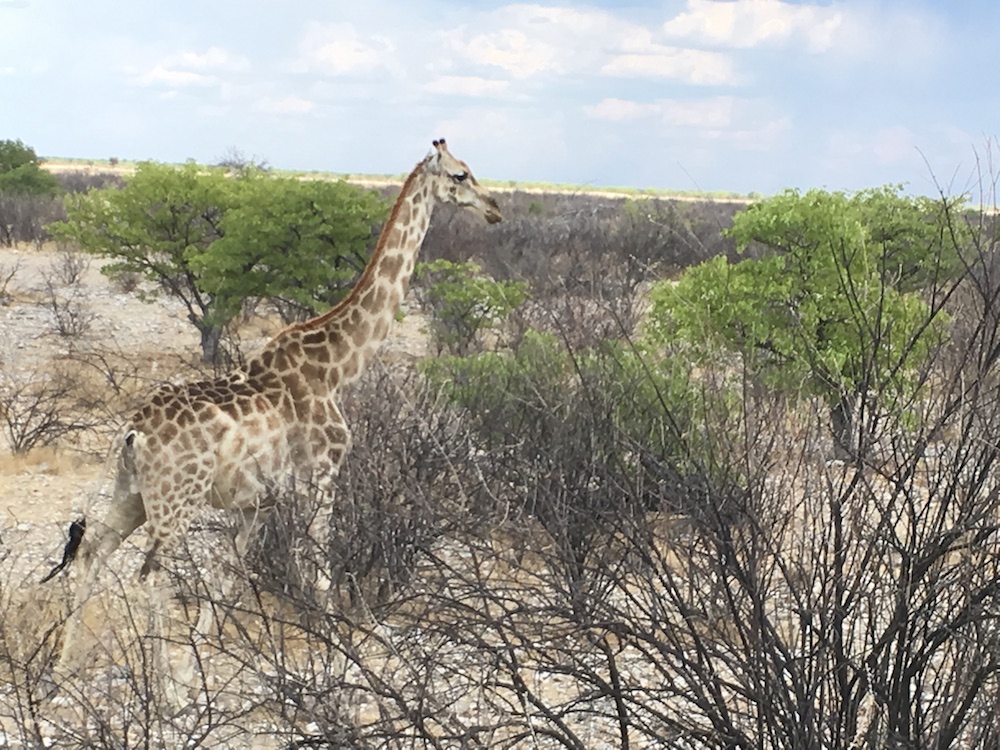 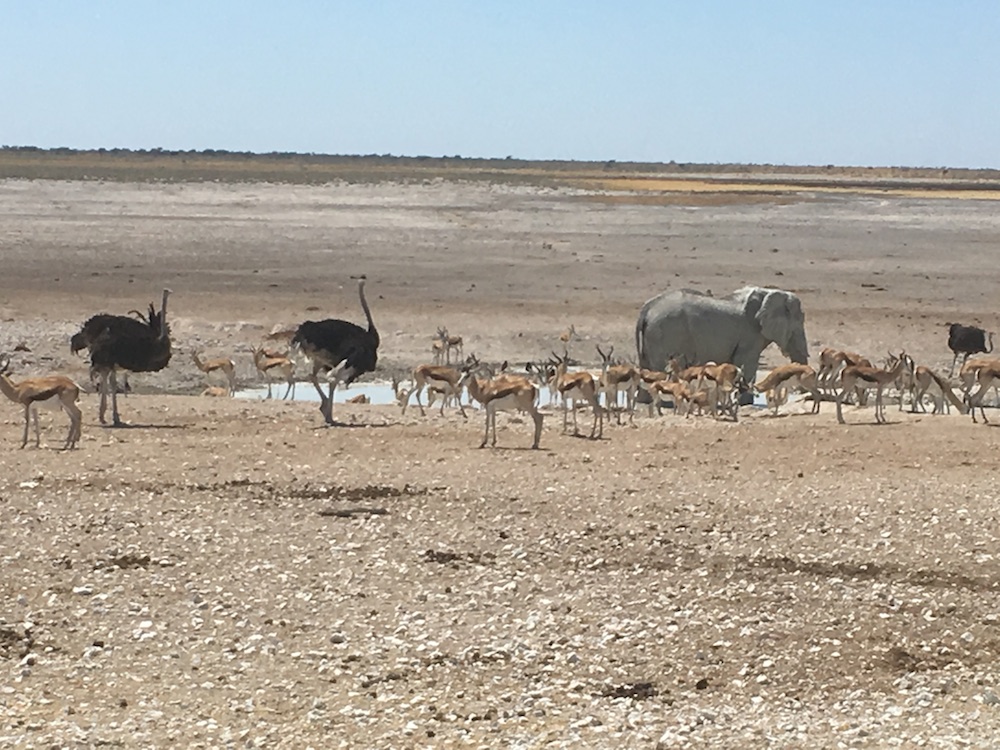 The atmosphere seems to improve in the northern part of Namibia and and the Caprivi. The life is different here. There are traditional villages and there are not as many white people, which makes the inequality less present.
After Etosha we pass via the Hoba meteorite, a 3 meter large galactic stone, and a giant Baobab tree with the respectable age of 3000 years to Zambia. The man at the register of the baobab tree says: “Be really quiet around the tree, because it is way older then Jesus Christ and it’s got a lot more to tell you.” 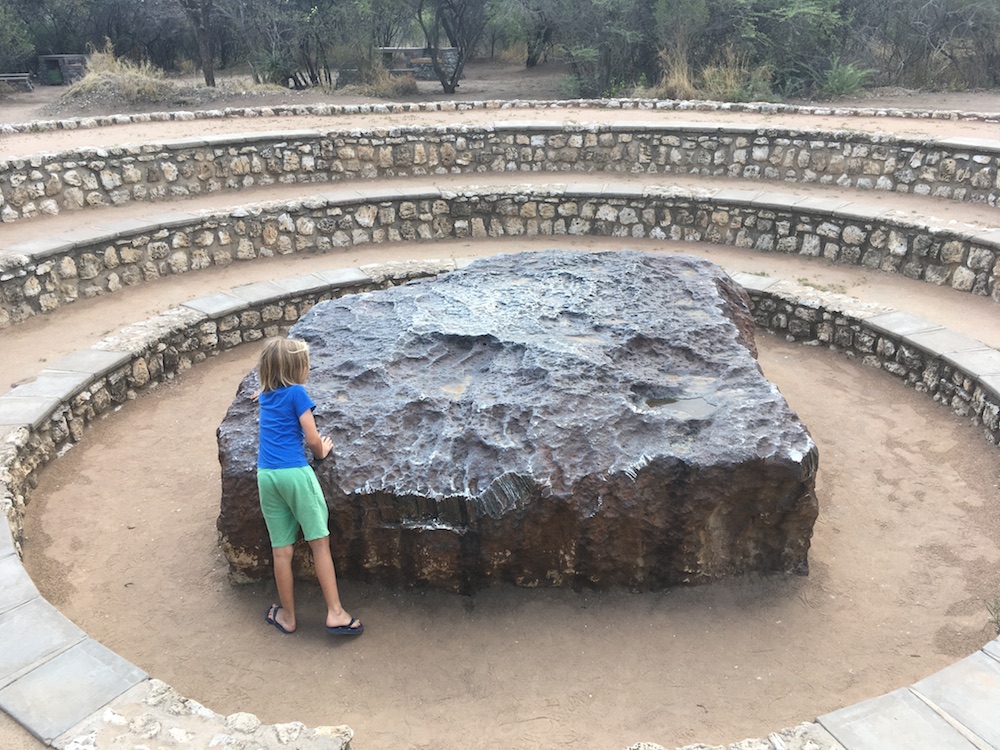 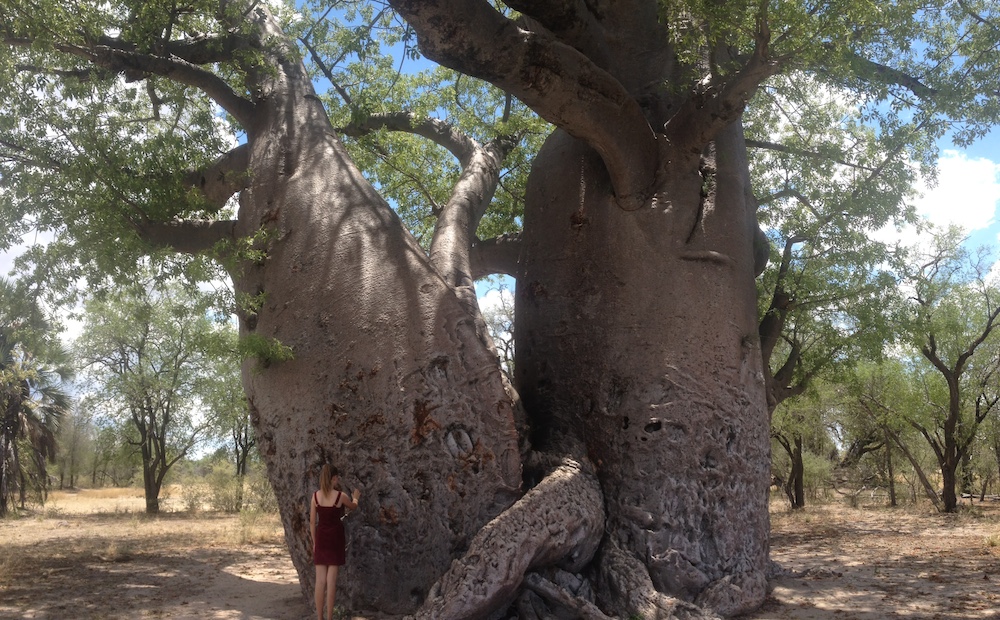