Saint Louis
In the meantime we are on our way to the next project location after spending almost four weeks at Chateau Diagn’art, in St Louis.
In the Chateau a group of young dancers gather every day between 16.00 and 20.00 to dance together and to show each other new moves.
Besides that the chateau offers different dancing classes, theatre classes and hosts a media group that produces independent film works. The chateau is situated in the middle of the fishermen’s quarter on the peninsula Langue the Barbarie. On one side the Atlantic Ocean on the other the river the Senegal.

Plastic
People do not really appreciate being filmed or photographed. They think we sell our pictures of them for big money in Europe and win money on their account. It s a petty because it makes it difficult to take good pictures. And the fishermen have really beautiful rituals to haul in the nets or release their boats to the sea.
Women can carry piles of all kinds of things on their heads without using their hands.
And especially the woman, but also some of the men wear very colourful clothing. Like confetti they brighten up the mainly brownish, yellow coloured streets.
In our last newsletter we mentioned the enormous amount of plastic already.
The trash is being dumped in big amounts every day into the sea or the river. If you are able to look through it, the city is really gorgeous, but we find it difficult, like all toubabs. (white people or foreigners)
If you refuse a plastic bag, to care for the environment, at a stall or a small window shop then everyone nods understandingly but maybe that’s because they are used to toubabs refusing plastic, rather then they find it important themselves.
Next to the Fishermen’s quarter lies the old city on an island in the river. The entire centre is an Unesco Heritage. It does seem that the trash is being picked up there. Maybe because of the many tourists.
But like any toubab we do think we should do a project that concerns the plastic.

The women
Adèle, the manager of the Chateau, told me that she would like to have more women coming to the Cultural Centre, because woman coming in is quiet rare. I would really like to do a few evenings of drawing workshops with them.
The first night 12 women appeared one and a half hour later then the starting time, and fully dressed up. Fantastic! Moussa just wanted to close the centre (it closes at 20.00) but we opened up again.
These women do not leave the house very much. There is a complicated social life with extended families that live around a shared patio. The women prepare the lunch (15.00) in turns and dinner (21.00) for around 9 to 15 people. That happens in really large pots or trays on a very small charcoal cooking pot. So it takes a while.
Dinner is being eaten from a large communal tray, while sitting all around it on the floor.
Behind the chateau is the house where Thieka lives, with all kinds of relatives, of whom we cannot determine who is who and how they are related.

I give the women their first drawing assignment. Draw each other without looking at your paper. Usually this blind drawing is good for a lot of hilarious fun. But they do it once or twice and are not impressed by the results; they just ask me if they have done it right. It’s clear to me that they are just doing it to be nice to me. I find that very kind and sweet of them but if it doesn’t interest them we can better do something else. And that’s what we did. We tell each other in Wolof and French how the live is lived in our respective countries. They find it great that Oscar does the cooking; their husbands should maybe do that too.

Pecheur de Plastic
Together with the dancers of the Chateau we made a performance in which the public can participate, to give attention to the plastic problem.

The dancers made a choreography, in which they move forward and backward with a big net, in a wavy motion, wearing the very typical yellow fishermen’s boots. Public and dancers wear blue gloves. The public is invited to ‘fish’ the around laying plastic from the beach and throw it in the nets. Together we will walk along the beach as a big fishing parade and dump our big monstrous plastic catch at the end of the beach. 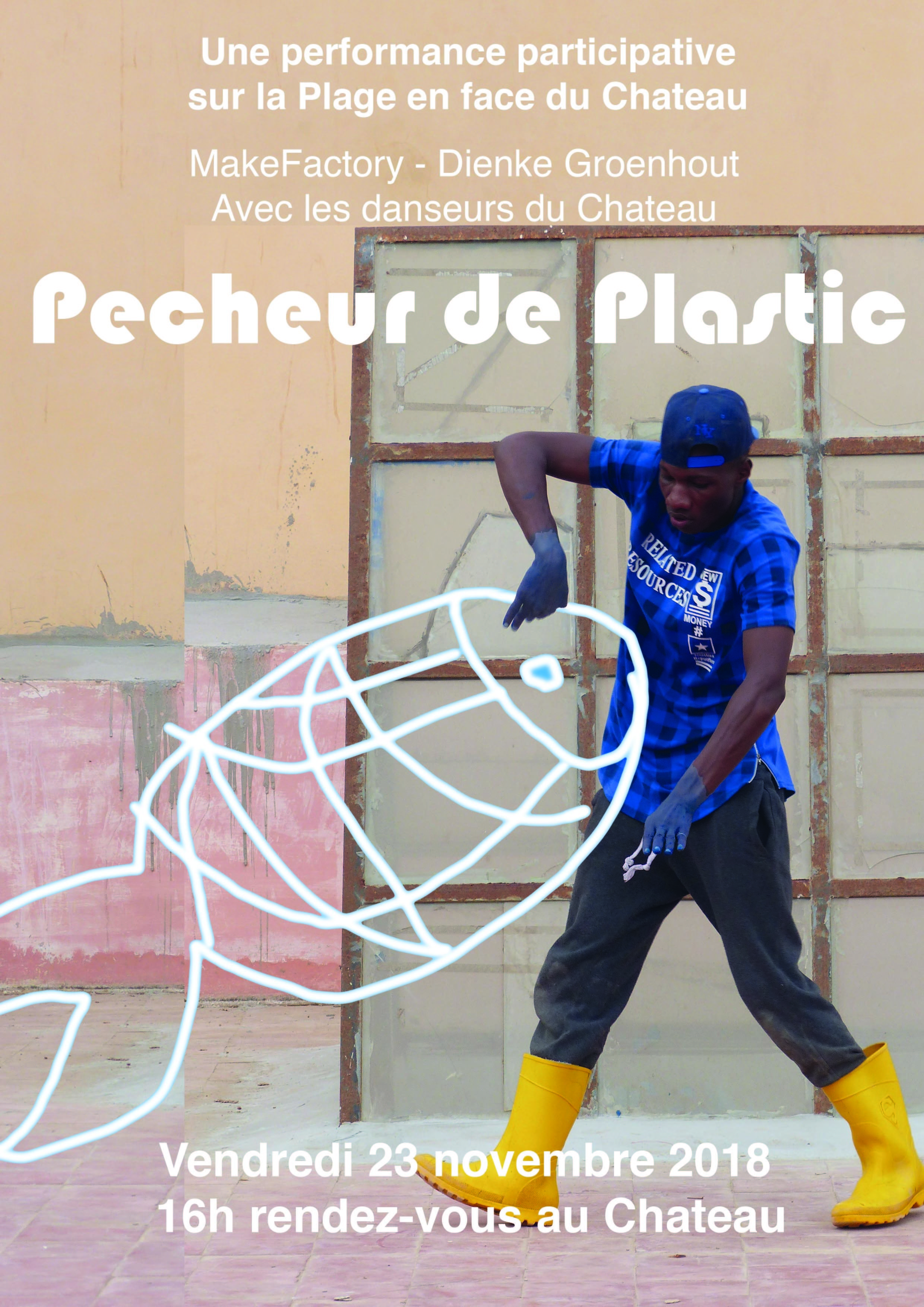 Erosion
An ironic problem arose last week, a few days before the performance was planned. The water rose very high. On the side of the land strip where the Chateau stands, and which was our planned beach location for the performance, the houses are built very closely to the waterfront.
Very high waves occur once or twice a year and wash away big parts of the houses.

The washing away of the buildings is of course a much larger problem for the people then the around laying plastics. But for our performance it was questionable if there would be a beach at all on the performing date but also, if the beach would appear back in time, would their be any plastic waste? Or would that also be washed away by the waves? 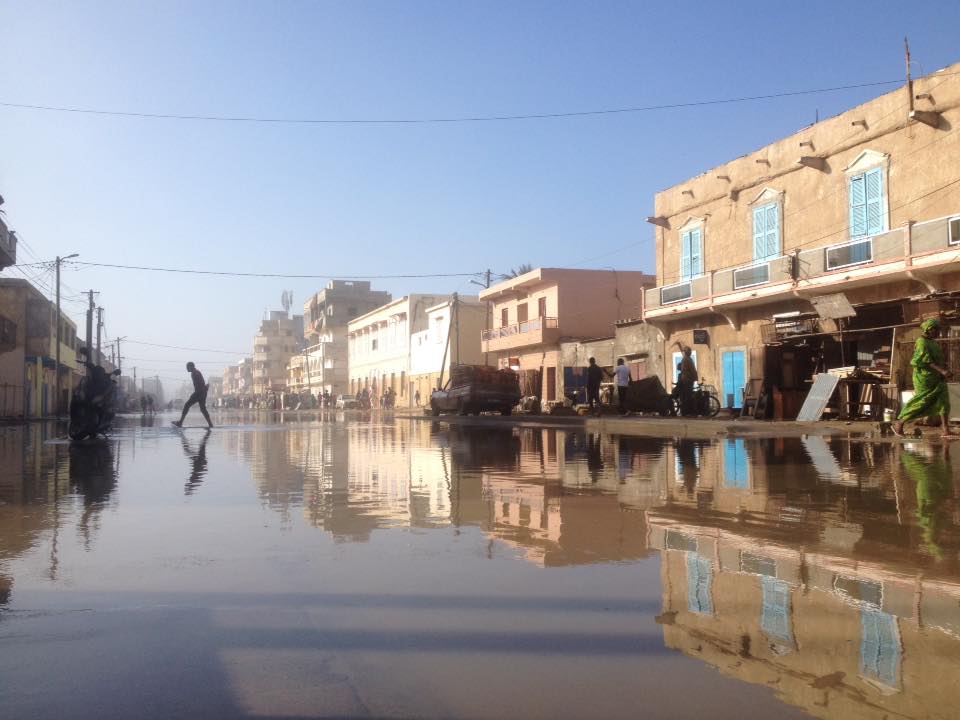 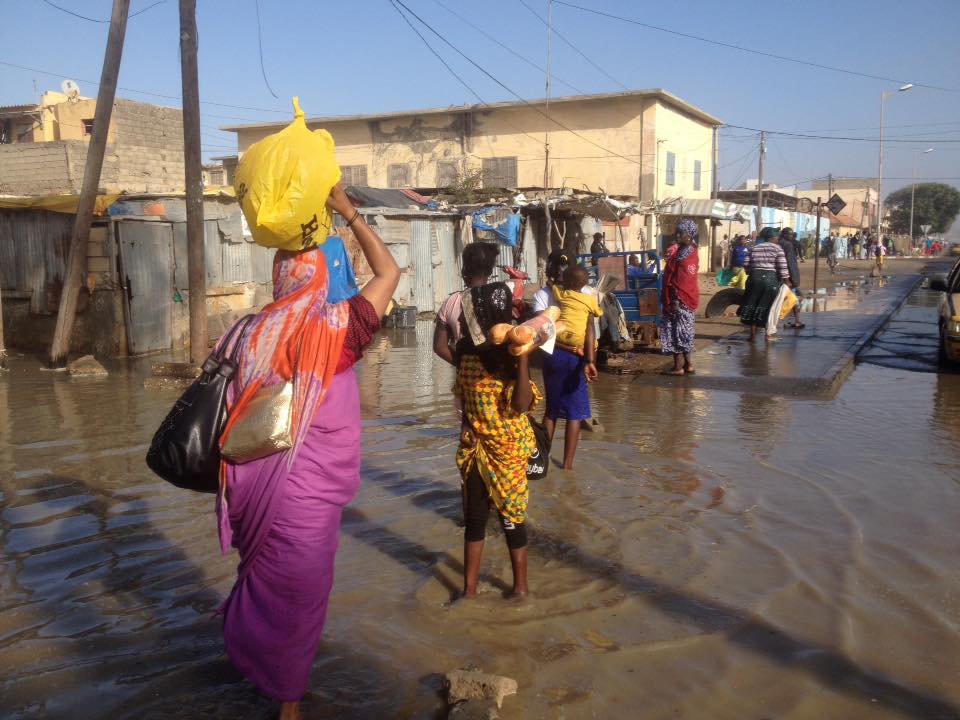 After three days the water was down again, but the beach was still very narrow.
But there was really a lot of plastic again, after only three days!
If we would go a bit further away where the beach was broader we could do the performance there. The movement that the dancers prepared is really beautiful.
But will we find the yellow boots on time? Every day Ablaye, our fantastic companion and friend, says that he will hear about it the next day.
Eventually on the day of the performance itself, minutes before we start, a group of fishermen comes marching in. With them also the brothers of Ablaye. They carry big sacs with yellow boots! Great! Fishermen hardly ever show themselves at the cultural centre. But now we have a whole group of them, and not only do they lent out their boots but they also stay to watch the performance!
Nice! There is also public from the other cultural locations in St Louis, like the WAAW centre and the Institut Francais.

The first round is being performed inside the cultural centre, and then we follow the dancers outside, carrying the music with us, and head to the beach. Immediately a group of people collects around us, and soon many people and kids are wearing the blue gloves.
In the beginning the kids pick up wood and stones from the beach, maybe that says something about how they don’t think plastic is dirt or trash.
On the broken quay that has been wrecked by the huge waves of the last days, stands the mayor. By coincidence he is just now visiting the fishermen’s quarter to have a look at the damage and local TV is interviewing him. That is a nice addition to our public

After a rather messy ending the dancers move back to the chateau with the filled net.
While the public and visitors disperse our friends remain to celebrate our goodbye party with us. Nice Senegalese bites suddenly appear and Coura made ‘bissap’. A bright red refreshing juice from hibiscus. De dancers are enthusiastic and jumpy, they are trying to get Mees and Sake (our youngest sons) to show them their breakdance moves.
But they are to shy with these big boys who are really good dancers. Ablayes brothers also stay for the party. He has 5 brothers all of them are fishermen. They tell us everything about the fishermen’s life. About the singing when hauling in the heavy nets, they chant the word ‘force’ in Wolof. We ask them al about it and they like it that we show so much interest. They also liked the performance, and the movements the dancers made look really like their way of working they say.
Then the oldest brother asks us; why don’t you come along one day?
What? Can we? All this time we had rather angry fishermen who didn’t like it if we took their picture en now on our last they we get invited to sail along!
We want to, but we are leaving the next day.
The entire evening every one takes pictures with everyone. And all agree that our visit has been too short.
The last people to leave are the women. They clap their hands and sing a song in which everyone does a short dance when your name is called out. When they finally leave we are left with Adèle to drink a beer and reflect on the whole project.
It has been good: we already want to come back.

The film of the performance is being edited right now, please visit our website soon to have a look at it.
Namibia here we come. 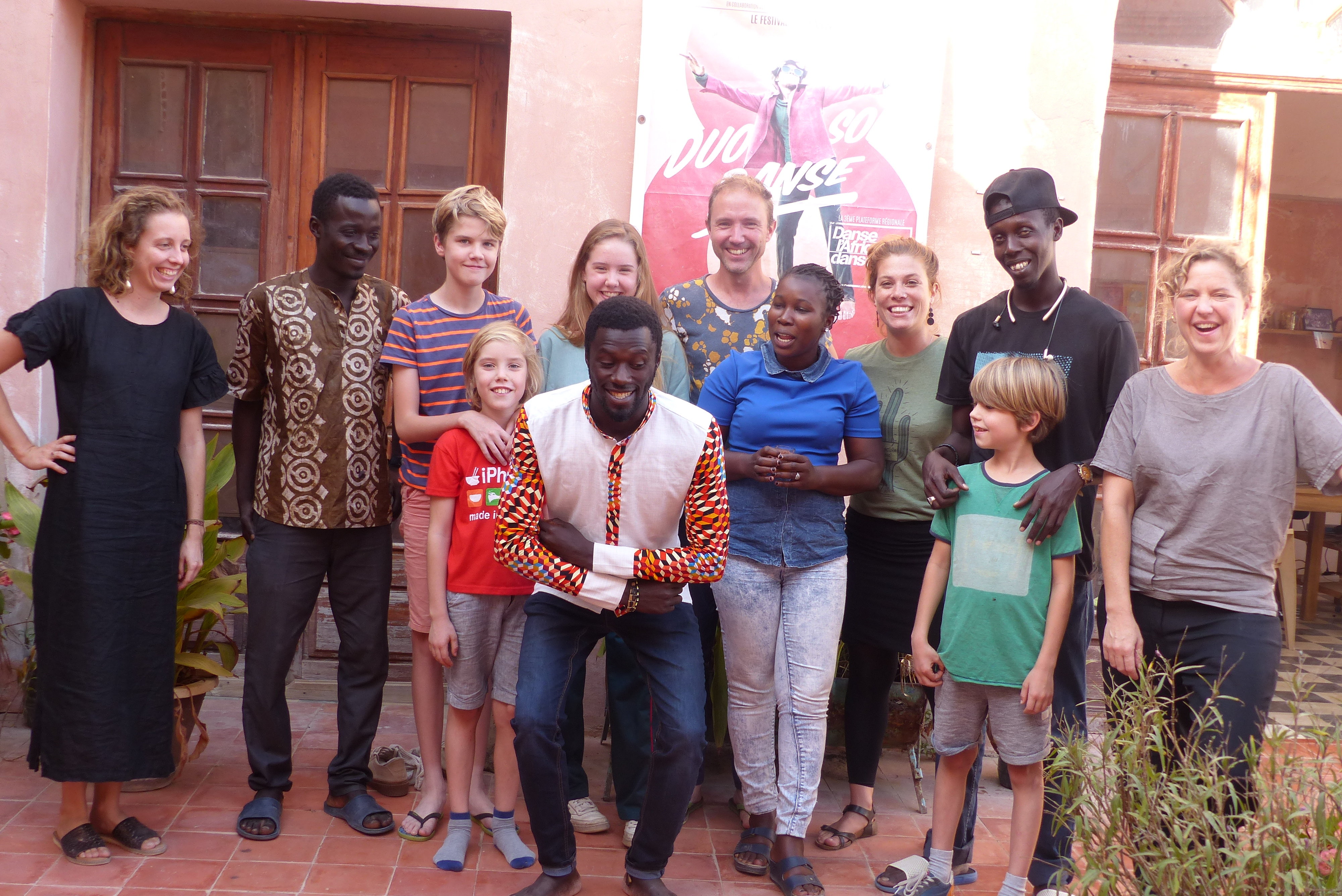